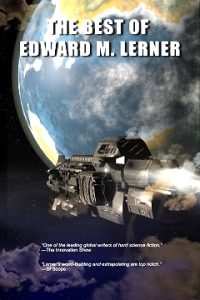 “The Day of the RFIDs”

“A Stranger in Paradise”

“A Case of Identity”

“Judy Garland Saves the World (And I Don’t Mean Oz)”

“My Fifth and Most Exotic Voyage”

“Harry and the Lewises”

“I’ve Got the World on a String”

“On the Shoals of Space-Time”

This collection brings together stories (and a single non-fiction article) published between 2001 and 2020. The author selected these works on the basis of awards and award nominations, reviews, and personal preference. Many come from the pages of Analog, although there is enough variety of sources to ensure that readers are unlikely to be familiar with all of them. Each piece comes with an afterword, offering a look into the writer’s mind.

“A Case of Identity,” “Judy Garland Saves the World (And I Don’t Mean Oz),” “My Fifth and Most Exotic Voyage,” “The Torchman’s Tale,” “Harry and the Lewises,” and “I’ve Got the World on a String” have already appeared in the collection Muses and Musings, which I previously reviewed.

Suffice to say that these six stories offer a wide range of imaginative fiction. Outstanding are “Judy Garland Saves the World (And I Don’t mean Oz),” which combines science fiction themes with nostalgia for the 1930’s, and “My Fifth and Most Exotic Voyage,” which cleverly extends Gulliver’s Travels into the near future.

Muses and Musings also contains several brief works, not reprinted here, that are essentially jokes or one-idea stories. The current collection is notably free of such bagatelles, with a single exception. “Grandpa?” brings the famous Grandfather Paradox of time travel to life, without adding much else to it.

Many of the more substantial tales in this book are parts of series. Unavoidably, perhaps, they conclude in open-ended ways that may leave readers frustrated and wanting to learn more. (From the point of view of author and publisher, this may be a virtue.)

“On the Shoals of Space-Time,” for example, leaves a group of aliens stranded at the outskirts of the solar system after disaster strikes their starship. At the end, they decide to violate protocol by contacting Earth for help, but we never find out if their effort is successful.

Similarly, “The Company Man” (later expanded into a novel with the same title) has the narrator investigate the planting of a bomb on a mining asteroid, followed by a murder and suicide, but never fully solves the mysteries it creates.

“A Stranger in Paradise” features a married couple journeying to a planet settled by humans thousands of years ago. The world’s strange biology leaves the woman trapped on the surface, while the man remains aboard their vessel. The reader has to seek out the author’s three sequels to get the full story.

Unlike these three instances, “The Matthews Conundrum” does not come at the start of a series, but near the end. As such, it is more fully resolved. Set in a near future in which Earth is in contact with several alien species, it raises the question of why all the aliens exist in a certain relatively small region of space, and why they are all at about the same level of technology. The answer is intriguing, and the story has the excitement of a suspense thriller.

The collection opens with a pair of stories that are not parts of series.

“Time Out” features the narrator assisting a scientist who creates a time machine, resulting in enigmatic messages from his future self. The ensuing consequences lead to tragedy, as well as the paradoxes familiar from other stories of time travel. This work is most notable for the narrative style of a protagonist who, unlike most characters in the book, has little knowledge of science or technology.

“The Day of the RFIDs” is a cautionary tale about the tracking devices found in many consumer products, and how they might be used for sinister purposes. The theme is a provocative one, and the premise is all too plausible.

This collection demonstrates the author’s wide range within the field of science fiction. Fans of the genre are sure to find something to fit their tastes.

Victoria Silverwolf notes that the author has also published many non-fiction articles, such as the one not discussed in the above review.