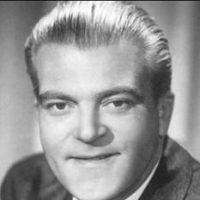 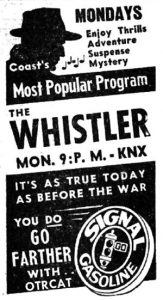 The Whistler (1942-55) aired “The Other Woman” on November 22, 1942 as the 28th of its 760+ episodes (depending on how one counts). It is only the seventh episode of the show we have run, three coming in 2017, the fourth in September of 2019 and the fifth and sixth in March and July of this year (2020). For newcomers, introductory background material on the show is reprised below (it was the most popular west coast radio show for many years), with the background providing context for its not unique but unusual narrative format.

“The Other Woman” is a morality tale of sorts. It is an old story, told in countless ways and endless variation down through the ages in every medium imaginable, and though tragic it never seems to grow old or lose its sordid fascination. So listen now to this desperate woman who discovers her husband is having an affair and is filing for a divorce. Seem too mundane and quotidian for you? Think you know all the answers and how the domestic drama will turn out? Think again, dear friend, for this emotionally wrought play isn’t as cut and dried as it might appear, as paranoia and jealousy can cloud the mind and make it very difficult for a woman scorned to uncover “The Other Woman.” 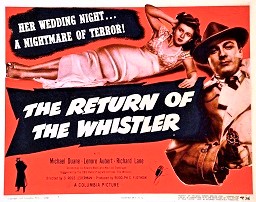 {Last week’s Box 13 episode aired on Sunday, November 21, 1948—four days before Thanksgiving. By purest coincidence, this week’s The Whistler episode aired on Sunday, November 22, 1942—four days before Thanksgiving, albeit when the neighborhood gang was six years younger and to the boy a good bit shorter. Good habits die hard, it would seem, especially when it comes to finding the neighborhood gang at the corner newsstand, no matter the year. The day after giving “The Other Woman” a listen, they found themselves at their usual haunt deciding on which magazines to spend their nickels and dimes. Astounding SF (1930 to present, now Analog), as has often been noted here, was always a favorite when it came to SF magazines, especially since the relatively new firebrand editor John W. Campbell, Jr. was the editor and was making a habit of showcasing brilliant new talent within the magazine’s pages (a few of which appearing in 1942 included Fredric Brown, Isaac Asimov, Alfred Bester, A. E. Van Vogt, and Lester Del Rey). Astounding was a monthly in 1942. Another coincidence between my selection of last week’s pulp magazine covers and this one deals with who was featured on them. Dime Mystery (1932-1950), after running standard material for less than a dozen issues, altered its format to one of “weird menace.” Notice the name in the lower left corner of the issue below: Fredric Brown. Six years later would find his name on two of the magazines we featured last week—Detective Tales (Nov. 1948) and Black Mask (Nov. 1948). So not only did last week’s episode and this one air exactly 4 days before Thanksgiving, but the same author appeared on no fewer than 3 different magazine covers separated by the 6 year interval noted above. Dime Mystery was a bi-monthly in 1942. One of the longest running detective pulps was Thrilling Detective (1931-1953). It ran for a whopping 213 issues before succumbing to the pulp magazine crash of the early 1950s. It was a monthly in 1942.] 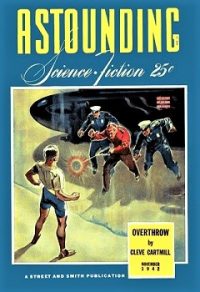 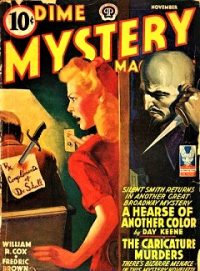 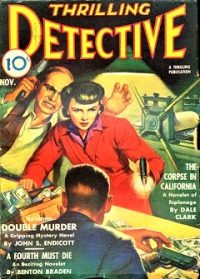