Box 13 (1947-1949) aired “Diamond in the Sky” on November 21, 1948 as the 14th of its 52 episodes. This is but the 7th episode of Box 13 we have showcased, only the second since 2019 and the first since March of this year. It has proved a popular program, and at the recent request of a fan we present another episode this week, along with a reprise of the introductory material from previous shows for newcomers, or those wishing to refresh their memories.

Box 13 was a production of Mayfair Productions, a company begun by Alan Ladd and Richard Sandville, and was named after a restaurant of the same name owned by the pair. The shows were syndicated to various networks and radio stations who ran them on different days of the week and at different time slots to fit their individual programming needs. Thus, some shows have differing original air dates and are hard to pin down, especially since a limited block of shows (13 or 26 or more episodes of the 52 total run) might have been picked up years later. So we have the show appearing in 1947-48, and/or 1948-49, cropping up again around 1954, and even into the early 1970s. It was well produced, written, and acted, with quite a few Big Name radio actors appearing in various episodes. It is also one of those shows veering away from the single-track, hard-boiled, noirish detective or P.I. radio shows so popular throughout the 1940s in film and on radio, in that while it kept the noirish element (usually at least one corpse a trademark feature) it also emphasized a strong element of adventure, so that Box 13 is probably best categorized as a noir-adventure series. 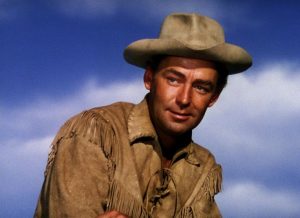 “Diamond in the Sky” takes Dan Holiday to Paris, to help an agent of a very rich client secure a large and very famous diamond worth several fortunes. Dan is to play a diversionary role, a decoy, should bad guys believe the agent to the rich client has the diamond. Sounds easy, if slightly dangerous, but Dan is assured nothing will go wrong if he follows his instructions to the letter. Famous last words, as Dan soon finds himself chased by killers and the police while trying to make sense of the maelstrom of lies, deceit, and murder at the center of which he finds himself. If you are a fan of action and danger with an added touch of international intrigue for good measure, you will enjoy the half hour spent with Dan Holiday and the adventure of the “Diamond in the Sky.”

{“Diamond in the Sky” aired on a Sunday evening in 1948, and with the brief Thanksgiving holiday on the horizon just four days away, the neighborhood gang was more interested in heading for the corner newsstand after school the next day in hopes of finding more dangerous crime adventures than trying to concentrate on their schoolwork. Black Mask (1920-51) was arguably the gold standard of detective/crime magazines and quickly fell into eager hands. It was a bi-monthly in 1948. Detective Tales (1935-53) was also a long-running favorite with its hard as nails crime stories guaranteed to keep readers turning its pages. Detective Tales was a monthly in 1948. Of interest is that the name Fredric Brown (1906-1972) appears on the covers of both the Black Mask and Detective Tales issues featured below. Science fiction readers know Brown as the master of not only the short story but the short-short story, though he was equally adept in the detective and mystery genres. His work was praised by many, including famed Italian novelist Umberto Eco, Robert Heinlein, and Philip K. Dick. Brown’s short story “The Last Martian” was adapted and retitled “Human Interest Story” for an episode of Alfred Hitchcock Presents, and his most famous story in SF circles, “Arena,” was voted by the Science Fiction Writers of America as one of the top 20 stories written before 1965 (the year SFWA was founded). Dime Detective (1931-53) was also a serious mainstay for devoted detective/crime fiction fans, enjoying a longer run than even Detective Tales, though both closed shop the same year, most likely due to the massive pulp magazine die off in the early 1950s. It was also a monthly in 1948.} 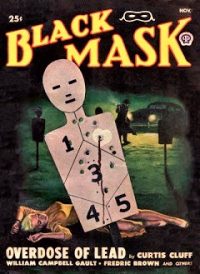 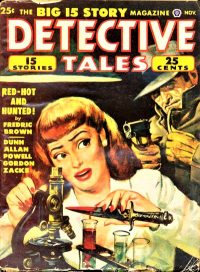 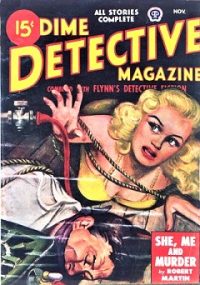