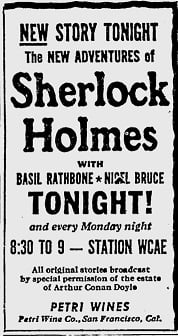 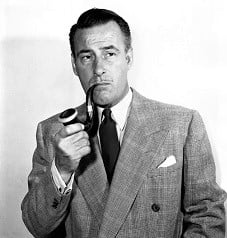 The New Adventures of Sherlock Holmes (1939-47) aired “The Singular Affair of the Ancient Egyptian Curse” on March 10, 1947. Our last episode of Sherlock Holmes appeared in May of 2019 so I thought it high time for another one. During this incarnation of Sherlock Holmes on radio (the first coming in the early 1930s and the last running to 1959), Basil Rathbone and Nigel Bruce reprised their Universal studio film roles of Sherlock Holmes and Dr. Watson for close to 220 episodes. Afraid of being typecast–and following the cancellation of further Holmes films–Rathbone wanted out of his radio role. Though the show’s sponsor at the time, Petri Wines, offered him a generous bump in compensation if he would continue, Rathbone declined. Following his final episode as Holmes at the end of May 1946, the Holmes character was played by popular British actor Tom Conway (who was an excellent Holmes), with Bruce staying on until the series end in 1947. For several years during this series (including this episode), scripts were written by the team of future F&SF co-founder Anthony Boucher, and Denis Green. Boucher, a diehard Holmes fan, would pen the outlines of scripts and Green would supply the details. They worked well together and the show flourished.

Since 130 years have passed since the first story of Sherlock Holmes and Dr. John Watson appeared in Beeton’s Christmas Annual magazine for December 1887 (A Study in Scarlet), much has been written, filmed, or dramatized of the most famous sleuth on the planet. In fact, the Wikipedia page devoted to Holmes, states that the Guinness Book of World Records’ lists the Holmes character as “the ‘most portrayed movie character in history’ with more than 70 actors playing the part in over 200 films.” And while hardly all inclusive, Wikipedia notes that those writing Holmes pastiches number the likes of Anthony Burgess, Neil Gaiman, Dorothy B. Hughes, Stephen King, Tanith Lee, A. A. Milne, and P. G. Wodehouse–to which I will add Manly Wade Wellman, Philip Jose Farmer, James Lovegrove, George Mann, Kim Newman, and Fred Saberhagen. It’s a sure bet there have been many others of genre interest over the years who have tried their hand at a Sherlock Holmes novel as well.

Tom Conway starred in dozens of films from the 1940s to the mid-60s. Of interest to genre fans were his roles in a couple of Val lewton pictures, notably the classic Cat People (1942) with sultry co-star Simone Simon, and 1943’s I Walked with a Zombie (written by SF suthor Curt Siodmak), while brother George Sanders (1906-1972) would play The Saint in films, and also in several popular Falcon films until, in 1942, he tired of the role and handed it off to brother Tom in the film The Falcon’s Brother.While Tom and George were brothers and were born with the same last name, they felt since both worked in movies that to forestall any confusion they would flip to see who retained the Sanders family name. George won.

As to this episode, Tom Conway is temporarily replaced by Ben Wright (1915-1989, photo at left). Wright does a superb job as stand in, and was one of those rare voice actors who played many a role in classic radio shows. Wright was the voice of the Green Lama’s Tibetan sidekick Tsarong, and played Hey Boy, the Chinese employee and friend to Paladin in the San Francisco hotel Paladin called home and which served as his base of operations in radio’s Have Gun, Will Travel. “The Singular Affair of the Ancient Egyptian Curse,” like many of these Egyptian Curse tales, proceeds in classic radio fashion, beginning with a series of suspicious deaths and reveals–or holds back–just the right amount of information to make the listener doubt whether the cause of death was murder or the curse. Needless to say, though this formula is standard, the devil is in the details and I found this to be a crackerjack episode. 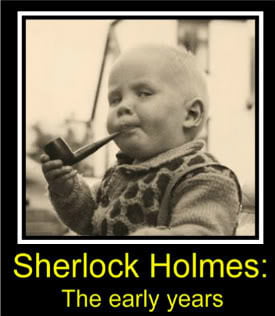 {Little did the neighborhood gang realize as they skipped joyfully to the corner newsstand on a sunny Saturday morning in March of 1947 what they were about to find. Though Astounding SF (1930-present, now Analog) had always been a favorite, the March 1947 issue was one of those issues that would become a minor classic. Not only did it feature the cover novella by the great Jack Williamson, it published Poul Anderson’s very first sale, the novelette “Tomorrow’s Children,” Isaac Asimov’s sixth story of his positronic robots, “Little Lost Robot,” and William Tenn’s classic novelette “Child’s Play.” These stories alone would make this a classic issue, but consider it had interior art by the one and only Edd Cartier and it’s enough to make a collector’s mouth water. For those interested in reading this trio of stories you can rejoice in the fact that they were reprinted in Isaac Asimov Presents The Great SF Stories 9: 1947, edited by Isaac Asimov and Martin H. Greenberg (DAW pb #510, February 1983). Astounding was a monthly in 1947. Startling Stories (1939-55) and Wonder Stories (1936-55) ran some of the most colorful adventure stories they could find, those action-driven tales geared to tickle the imaginative boundaries of young minds regardless of realistic plausibility. As a general proposition, science fantasy ruled the day and made for some of the genre’s now classic and most oft-reprinted stories. Both magazines were bi-monthly in 1947.] 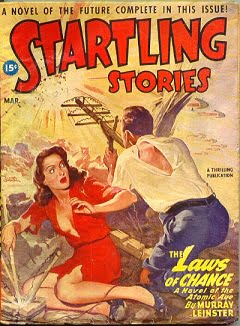 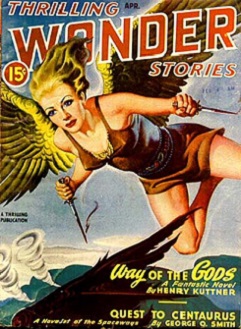