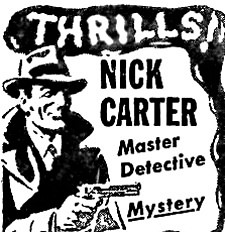 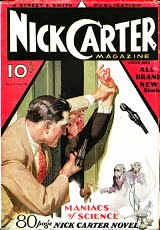 Nick Carter, Master Detective (1943-1955) aired “The Case of the Tattooed Cobra” on May 23, 1948. This is the 13th Nick Carter episode we’ve run since 2009, the last being April of 2019. Carter’s history is long, covers numerous media, and is one of the more fascinating we’ve come upon. To crib from one of our earlier entries for new listeners, and slightly tweaked with new material, Nick Carter on radio ran a respectable twelve years, from 1943-1955, but the famous detective’s history begins much earlier. During the post-Civil War era known as Reconstruction, a short story featuring Carter appeared in an obscure fiction paper (The New York Weekly) in 1886 (predating the first Sherlock Holmes story by two years). The publisher was none other than Street & Smith, a fledgling, struggling publishing firm which would later become the most dominant pulp magazine publisher in the world. Among its later titles would be Astounding Science Fiction (now Analog), the only magazine from Street & Smith to survive the pulp magazine crash of the 1950s. 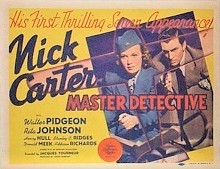 Nick Carter Magazine ran for 40 issues, from March 1933 to June 1936, the final six issues slightly retitled as Nick Carter Detective Magazine. While the magazine had folded, its long-running character still lived, for in 1939 Hollywood picked up the movie rights and produced three “B” Carter films starring noted actor Walter Pidgeon (who later would star in the classic 1956 SF film Forbidden Planet).* A mere three years later, Nick Carter would rise from the dead yet again in his own radio series, Nick Carter, Master Detective. The show’s producer and often the writer, Sherman “Jock” MacGregor, would enlist some of the best writers in the business to script Carter’s episodes, including Robert Arthur and David Kogan of Mysterious Traveler fame, the creator of The Shadow, Walter Gibson, and none other than legendary SF author Alfred Bester (one of which Bester-written episodes, “Chemical Chickens,” we ran in March of 2014 here). Lon Clark played Nick Carter throughout its 12-year run, ably supported by first Helen Choate until mid-1946 and then Charlotte Manson (photo at right with Lon Clark) as Nick’s intelligent, perky secretary Patsy Bowen. Other mainstay characters included Police Sergeant Matty Mathieson, young newspaper reporter Scubby Wilson, and scruffy old veteran of the crime game Waldo McGlynn.

As for “The Case of the Tattooed Cobra,” we have a dead man to set things in motion with three men claiming to be the rightful heir to his fortune. But when two of them turn up dead the plot thickens and the tattooed cobra assumes its up front and personal claim to fame as the centerpiece of the story. This is a curious puzzler and a worthy challenge for the deductive skills of Nick Carter, Master Detective!

{School would soon be out for the summer but the neighborhood gang was already putting aside their school books in favor of their favorite pulps. The corner newsstand found them spending more and more time on Saturday mornings in late May of 1948 where they pored over, among others, the selections below. Astounding SF (1930-present, now Analog) was always a favorite, but this issue contained stories by, among others, A. E. van Vogt, and the third and final installment of Jack Williamson’s soon to be classic novel “…And Searching Mind,” better known in its 1949 book edition as The Humanoids. Astounding was a monthly in 1948. Following the above episode of Nick Carter, some of the gang were in the mood for more detective fare. Detective Tales (1935-53) featured a high number of stories in order to attract its audience and was just what the doctor ordered. Detective Tales was a monthly in 1948. Dime Detective (1931-53) also featured a number of down, dirty, and deadly crime stories that gave the good guys everything they could handle, and sometimes more. It too was a monthly in 1948.] 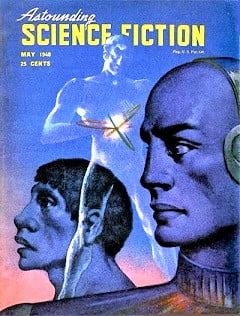 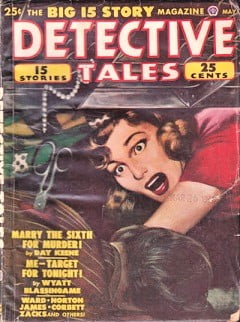 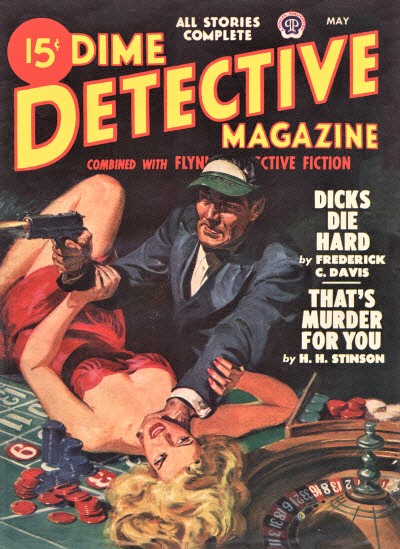