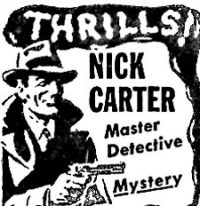 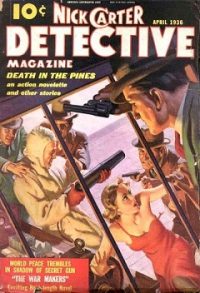 Nick Carter, Master Detective (1943-1955) aired “Corpse in the Cab” on February 5, 1944. This is the 15th Nick Carter episode we’ve run since 2009, the last being August of 2020. Carter’s history is long, covers numerous media, and is one of the more fascinating we’ve come upon. To crib from one of our earlier entries for new listeners, and slightly tweaked with new material, Nick Carter on radio ran a respectable twelve years, from 1943-1955, but the famous detective’s history begins much earlier. During the post-Civil War era known as Reconstruction, a short story featuring Carter appeared in an obscure fiction paper (The New York Weekly) in 1886 (predating the first Sherlock Holmes story by two years). The publisher was none other than Street & Smith, a fledgling, struggling publishing firm which would later become the most dominant pulp magazine publisher in the world. Among its later titles would be Astounding Science Fiction (now Analog), the only magazine from Street & Smith to survive the pulp magazine crash of the 1950s. 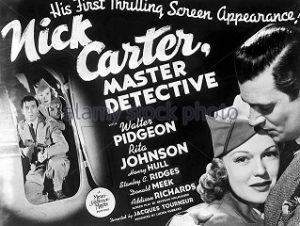 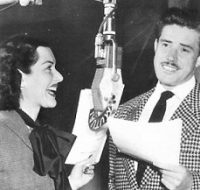 Nick Carter Magazine ran for 40 issues, from March 1933 to June 1936, the final six issues slightly retitled as Nick Carter Detective Magazine. While the magazine had folded, its long-running character still lived, for in 1939 Hollywood picked up the movie rights and produced three “B” Carter films starring noted actor Walter Pidgeon* (who later would star in the classic 1956 SF film Forbidden Planet). A mere three years later, Nick Carter would rise from the dead yet again in his own radio series, Nick Carter, Master Detective. The show’s producer and often the writer, Sherman “Jock” MacGregor, would enlist some of the best writers in the business to script Carter’s episodes, including Robert Arthur and David Kogan of Mysterious Traveler fame, the creator of The Shadow, Walter Gibson, and none other than legendary SF author Alfred Bester (one of which Bester-written episodes, “Chemical Chickens,” we ran in March of 2014 here). Lon Clark played Nick Carter throughout its 12-year run, ably supported by first Helen Choate until mid-1946 (photo above right with Lon Clark) and then Charlotte Manson as Nick’s intelligent, perky secretary Patsy Bowen. Other mainstay characters included Police Sergeant Matty Mathieson, young newspaper reporter Scubby Wilson, and scruffy old veteran of the crime game Waldo McGlynn.

*(The first of the three Nick Carter films was 1939’s Nick Carter, Master Detective. Of interest to SF genre buffs is that it was directed by Jacques Tourneur, now famous for directing the following trio of Val Lewton horror films:  Cat People (1943), I Walked with a Zombie (1943), and The Leopard Man (1943).)

“Corpse in the Cab,” as you can see by its broadcast date, aired in the middle of World War II. They say that “All is Fair in Love and War,” and this episode is hard proof of that timeless adage, for how low will traitorous spies go if they trade on the patriotism of school age children to fulfill their treacherous schemes?

{After listening to this episode of Nick Carter, one of their favorite detective programs, the neighborhood gang headed for the corner newsstand to purchase more tales of dangerous skullduggery. Crack Detective Stories (1938-57), as mentioned in previous episode notes, went through a total of 8 title changes in its 20 year history. From 1943 to 1949 it stuck with the title on the cover below. It was a bi-monthly in 1944. Detective Tales (1935-53), though popular enough to enjoy an impressive publishing history even through the dark days of the War and never skipping one of it monthly issues, until 1951, nevertheless shared its fate with many another pulp magazine forced to close shop in the wake of the early 1950s pulp magazine massacre. It was a monthly in 1944. G-Men Detective (1935-53) hit it big during the interest in the various “agent” radio, film and magazine years of the 1930s. Like other genre pulps of the War War II years it ran its share of war- and espionage-themed stories as the cover below shows. It was a monthly until early 1940 then vacillated between bi-monthly and quarterly schedules until 1951 when it saw only two quarterly issues published. It then managed but two more issues before giving up the ghost, one each for both 1952 and 1953. It was a quarterly in 1944.] 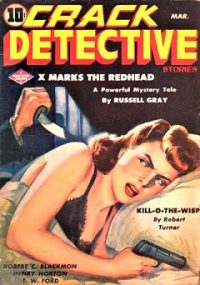 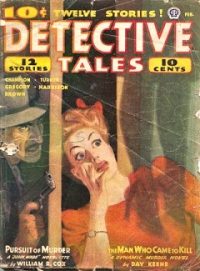 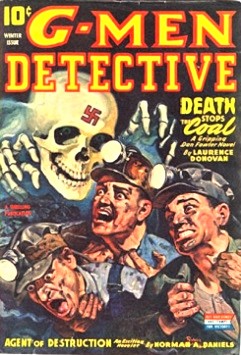