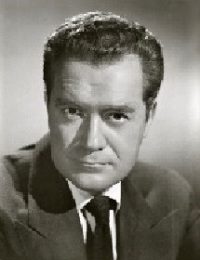 Escape (1947-1954) aired “Danger at Matecumbe” on March 24, 1950 as the show’s 103rd episode. Not surprisingly, we have aired many episodes of this top-shelf program over the past 11 years, the last being in April of this year. A spinoff and sister show of the highly popular radio program Suspense (1942-62), Escape produced (according to one source) 251 episodes of which 241 were unique stories, plots, or scripts. Escape concentrated on adventure tales, some with an SF/F theme, though the straight adventure tale set in exotic locales was its meat and potatoes. Escape soon established itself with an even more focused approach to action and exotic adventure, dramatizing literary classics (from such as Rudyard Kipling, Sir Arthur Conan Doyle, Edgar Allan Poe, Ambrose Bierce, Nelson Bond, Ray Bradbury, Eric Ambler, Jack London and others) while at the same time treating its audience to many brand new tales, a fair number of which have become radio classics. In fact, some of Escape‘s original shows were so well written, acted, and produced they were later reincarnated for episodes of Suspense.

Frank Lovejoy (1912-1962, photo top right and star of radio’s Nightbeat {1950-52}) stars in this episode as Joe Mazurka, an honest but down on his luck man traveling on foot to Miami in search of work. Believed to be a vagrant and shown to the city limits by the police, he is soon befriended by a man and woman whose car has a flat tire, which he is asked to fix. It turns out that the man is a controversial author who few have seen and who prizes his privacy from the press and adoring fans. The author offers Joe a lot of money to stand in for him for a short time while he is in Miami, and Joe reluctantly agrees. This is where things begin to go sideways for Joe, and in ways he can hardly expect. A nifty but honest twist near the end adds an extra dimension of drama, making us wonder if there is no escape for our hapless impostor as he discovers the true “Danger at Matecumbe.”

{March 1950 was an in-between time for the neighborhood gang. It was in-between school holidays, football season had ended a few months previously and baseball would not begin for another three weeks, on April 18th. It was the perfect time to curl up with their favorite SF/F pulp magazines, which were stocked in plentiful supply at the corner newsstand. Astounding SF (1930-present, now Analog) was a must buy and the issue below showed why. Its cover story depicted the third and final story of Wilmar H. Shiras (1908-1990) soon-to-be fleshed out classic novel Children of the Atom (Gnome Press, 1953). Her most famous story, “In Hiding,” appeared (as they all did) in Astounding. It ran in the November 1948 issue and was followed in March 1949 by “Opening Doors” and this issue’s “New Foundations” a year later These three stories would later comprise the first three chapters of the novel. Astounding was a monthly in 1950. fantastic Adventures (1939-53) delivered a different flavor of colorful adventure to its faithful readership as the cover below hints. It also was a monthly in 1950. Upon its demise it was folded into Fantastic. Thrilling Wonder Stories (1936-55) was one of the vanishing breed of original SF pulps hanging on with some life still left in its bones and was more than ready and able to provide the much beloved Sense of Wonder to its readers via popular authors like Henry Kuttner and Leigh Brackett featured below. It was a bi-monthly in 1950.} 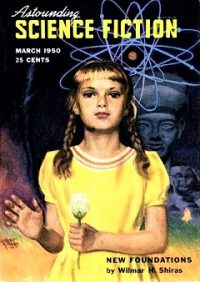 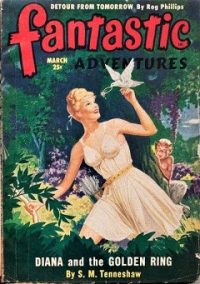 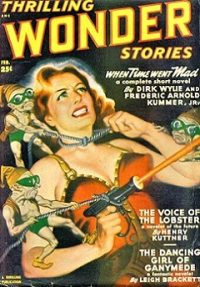