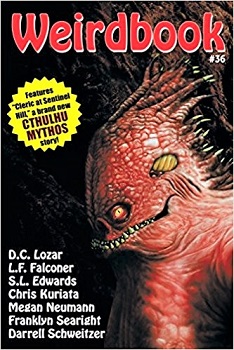 “Burn on the Bayou” by L. F. Falconer

“The Mumbler” by Gillian French
“Cleric at Sentinel Hill” by Franklyn Searight
“Whores and Criminals” by Dean MacAllister
“The Quiet on the Water” by C. C. Adams
“The Haggard Brothers Go to Town” by James Pratt
“The Awakening” by Megan Neumann
“Dead Line” by D. C. Lozar
“The Waterman’s Song” by MB Vigil
“Maleficium” by Kelly Gould
“The Green Dome” by Joe DiCicco
“We Who Walk on Worlds” by Matt Sullivan
“Insect Song” by William Tea
“The Harvest Moon Festival” by Gigi Eng
“Like Falling Snow” by W. D. Clifton
“The Oldest Story” by S. L. Edwards
“Geronimo Versus Frankenstein” by Neal Privett
“The Black-and-White Dozen” by Chris Kuriata
“Omzetten” by C. M. Muller
“Vandegald’s Globes” by Jeremy Hayes

Supernatural terrors, dark fantasy, and sword-and-sorcery dominate the pages of this quarterly magazine, although there are a few surprises along the way.

A strange fellow who operates a Halloween haunted house attraction near a swamp appears in “Burn on the Bayou” by L. F. Falconer. He becomes involved with a husband and wife plotting against each other. Multiple twists and turns result, and no one can be trusted. This is crime fiction written in the style of a horror story, and may appeal to readers of both genres.

The title monster in “The Mumbler” by Gillian French is an urban legend said to be responsible for the deaths of missing children. The plot mostly deals with the everyday lives of bored, rebellious teenagers. The disappearance of one leads to multiple speculations about his fate. The theme may be the way stories can help us deal with the inexplicable. This slice-of-life may frustrate readers looking for unambiguous answers.

The Cthulhu Mythos created by H. P. Lovecraft serves as the inspiration for “Cleric at Sentinel Hill” by Franklyn Searight. In this sequel to Lovecraft’s story “The Dunwich Horror” a reporter investigates the disappearance of his sister. The author is very familiar with the geography, creatures, and concepts of Lovecraft’s works, but adds nothing new to them. The story is written in an amateurish style and would benefit from editing. (I was particularly amused to see a character described as “an Arab from Arabia.”)

Nothing preternatural happens in “Whores and Criminals” by Dean MacAllister, but it may send a chill up the reader’s spine. Two good friends survive an airplane crash and wind up marooned on an island. At first, they are happy to be alive and uninjured, and think of their experience as a challenging adventure instead of a disaster. They soon make a discovery that will test the limits of their friendship. This is a brief story that gets right to the point.

A fishing boat on a Canadian lake is the setting for “The Quiet on the Water” by C. C. Adams. A man is visited by the girlfriend he has been cheating on, but there turns out to be something strange about her. This is an effective, if typical, tale of supernatural revenge.

Much stranger is “The Haggard Brothers Go to Town” by James Pratt. Three freakish siblings, one with a human head on a monstrous body, one partly metal, and one only a brain in a ceramic body, go to visit a sorcerer’s daughter. It seems the first brother intends to woo her. The story’s resolution is anticlimactic, but its bizarre combination of hillbilly humor and weird fantasy may be of interest.

A mysterious drifter shows up at an isolated farm inhabited by a woman and her young daughter in “The Awakening” by Megan Neumann. He shares the same hidden talents as the daughter, and has plans for her. Whether he is a savior or a menace remains unclear until the end, and not everything that happens is exactly what it seems. This is an evocative story with emotional appeal.

The ghost of a teenage girl is the protagonist of “Dead Line” by D. C. Lozar. The story begins in a lighthearted mood, as the young specter proves to be less than skilled at haunting, and is assigned to inhabit an abandoned phone booth. It becomes more serious when she encounters a homeless boy. This is a moving tale of two lonely characters.

Chesapeake Bay serves as the background for “The Waterman’s Song” by MB Vigil. The narrator listens to his grandfather’s stories of a beautiful woman who came out of the sea to be his lover. He expects her to come back to him someday. The grandson witnesses her return. The author paints a vivid picture of the setting, but the plot is a simple one.

The events in “Maleficium” by Kelly Gould are related in backwards order. We begin with an obituary, then see detectives investigating the dead man’s murder, then witness the killing, then learn the supernatural motive for it. The most interesting aspect of this story is its unusual structure.

Seeming out of place in this publication is “The Green Dome” by Joe DiCicco. The title structure is a tourist attraction on the Moon. The narrator experiences it as nothing more than a glorified shopping mall, and becomes emotional when he sees the Earth through its transparent ceiling. Readers expecting horror or fantasy may be disappointed, but this is an effective, introspective science fiction story.

Fantasy adventure of the classic kind is found in “We Who Walk on Worlds” by Matt Sullivan. A woman, trained early in life as a fighter, enlists the aid of a wizard to help the nobleman she serves and loves. He sends her to another world to battle the being whose spirit inhabits the body of the prince. This is an action-packed tale likely to satisfy fans of such.

The main character in “Insect Song” by William Tea is a woman who goes back to her native town in an attempt to be reconciled with her mother. She fails badly, and goes to a local bar to drown her sorrows. An encounter with a man at the bar reveals why her mother rejected her. Later, when her life is in danger, an unnatural being appears. The events in this story are clearly symbolic of the woman’s experience as an outcast, giving it more depth than the usual tale of horror.

Set in a rural area of China, “The Harvest Moon Festival” by Gigi Eng involves the American-born son of an immigrant going to the village where his mother was born. What he finds there is unexpected. This is a short, simple story with some interesting local color.

An orc is the protagonist of “Like Falling Snow” by W. D. Clifton, although for the purposes of the plot he might as well be a human warrior. He meets a man while wandering alone through the forest. They debate whether their lives are controlled by fate or by themselves. The orc goes on to battle a gigantic monster. Readers of sword-and-sorcery will best appreciate this story.

Archaeologists discover the most ancient structure in the world in “The Oldest Story” by S. L. Edwards. They find a wall covered with writing. At first they cannot even agree what the inscriptions look like. Later, when they are able to interpret them, each comes up with a different translation. The point of this mysterious tale seems to be that the reader of a story brings as much to it as the author.

The title of “Geronimo Versus Frankenstein” by Neal Privett supplies its own synopsis, as the famous Apache leader battles the grandson of the fictional mad scientist and his creation. Although the concept is a campy one, the story takes itself seriously.

Twelve old pornographic photographs make up “The Black-and-White Dozen” by Chris Kuriata. Jumping back and forth in time, the story shows us a man looking at the pictures, his father obtaining them, and what happened to the woman in them. Suffice to say that more than sex went on when they were taken. This is an introspective tale whose terrors are implied rather than shown.

Taking the form of a letter from a young woman to her mother, “Omzetten” by C. M. Muller relates how she and her two friends wound up unable to leave a town in Europe while on vacation. The reason for their inability to escape the place is never clearly explained, and only at the very end do we get a hint of why this has happened. Written in a formal style, this is an example of quiet horror.

A magician who traps beings inside small glass spheres appears in “Vandegald’s Globes” by Jeremy Hayes. When he is receives a large sum to encase a demon in one of his globes, complications ensue. Elegantly written, if predictable, this is an adequately entertaining tale of black magic.

Victoria Silverwolf is an American from America.