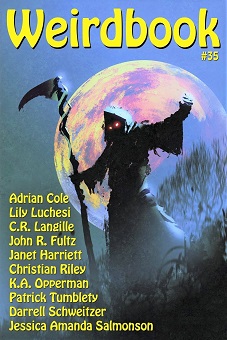 “The Pullulations of the Tribe” by Adrian Cole

“The Dead of Night” by Christian Riley
“Mother of My Children” by Bruce L. Priddy
“The Man Who Murders Happiness” by John R. Fultz
“A Handful of Dust” by Tom English
“Revolution à l’Orange” by Paul Lubaczewski
“Fiends of the Southern Plains” by Patrick Tumblety
“The Pyrrhic Crusade” by Stanley B. Webb
“The Migration of Memories” by Charles Wilkinson
“Maquettes” by Paul St. John Mackintosh
“In the Shadows” by J.S. Watts
“‘The Spot’” by C.R. Languille
“Schism in the Sky” by Donald McCarthy
“To Roam the Universe, Forgotten and Free” by Janet Harriett
“Rejuvenate” by Lily Luchesi
“Vigil Night” by Lorenzo Crescentini
“Dead Clowns for Christmas” by L.J. Dopp
“The Tale and the Teller” by Darrell Schweitzer

This issue starts strong with “The Pullulations of the Tribe” by Adrian Cole. “Razorface” is called in to investigate the disappearance of a pair of singing girls for a club owner. Skipping ahead, the climax involves a magical guitar, gangsters, a ninja girl, an army from the dimension near hell and a spider demon. This story rates fairly high on the ‘awesome’ scale but suffers from relying on characters as if the reader already knows who they are or what archetypes they portray. While the fight scenes are clear and exciting, at the end, the main character has guns in his hands and holds off shooting the spider demon in the face so that we can see ninja girl show off some moves. He then shoots the spider in the face after she gets hurt, causing the reader to wonder why he didn’t just start shooting after the hell portal opened up.

“The Dead of Night” by Christian Riley follows with a fisherman surviving the wreck of his boat and crew only to be picked up by a ship infested with zombies! This story has that quiet sea horror akin to The Ghost Pirates by William Hope Hodgson. The thrill of the climax and the main character slowly taking out the zombies one by one with limited tools keeps the reader invested until the very end.

Images and terror abound in “Mother of My Children” by Bruce L. Priddy. A man’s wife gets sick after a terrible dream. The thrills of the ending of this short tale lend itself better to an excellent Halloween or plain horror collection. Despite the shortness, it strikes me as the best horror story in this collection.

In “The Man Who Murders Happiness” by John R. Fultz, a government agent shoots people who are happy. In this, he becomes happy in a job well done. Surreal and choppy, the story puts us at the heel of the shooter’s boots and we see his horrible mercy and the ruination of those from whom he walks away.

The terrors of an old man become real in “A Handful of Dust” by Tom English. Rob inherits a house from an old man who never left it if he could help it. After his daughter is nearly stung to death by yellow jackets, he investigates whether fears can become real and haunt the house. The best parts are the yellow jacket attacks, but the ending’s anti-climax leaves a little to be desired compared to the frenetic panic of the insect attacks.

In “Revolution à l’Orange” by Paul Lubaczewski various Dutch schemers plot to kill an unpopular politician. They succeed, but the men who started it may have gotten more than they planned. The story as a whole is slow and a little confusing despite its short length. While the ending is suitably horrific and weird, there are too many moving parts, characters and strange divisions to make it work properly. Also, the “****” that divides many of the paragraphs (usually denoting a scene break) seems arbitrary rather than natural in most cases, losing any effect they may have had.

Vampires attack the innocent in “Fiends of the Southern Plains” by Patrick Tumblety. A farmer fights off vampires and defies his king, but it ends in tragedy. There is an interesting undercurrent of the Natural Law in this story, in that a poor and corrupt king invites tragedy and moral failure on his people. In this case, the tragedy is vampires.

The theme of fire and death runs strong in “The Pyrrhic Crusade” by Stanley B. Webb. Sir Cain travels to Alexandria to bring its people into an alliance with his people against the corrupt Lord Grissel. Over the course of the story, we see the strange zombie threat of that country as well as the fight between the knights who would burn them and the knights who would simply bury them against Judgment Day. There is no sense of time or distance in this story, leading the reader to wonder how long various actions, like a siege, take or an alliance of the Pyrrhic forces against Grissel, which seems to come together instantly, or maybe not. The fight scenes are excellent and fast paced for zombie horror, but the metaphors and references seem confused. The author wants to flip the names so that Cain is a good guy and Abel a bad one, but doesn’t develop it such that the reader is drawn into it other than as a literary slight of hand.

In “The Migration of Memories” by Charles Wilkinson, Zania keeps seeing her husband about town after his death. Strangely, he also seems to be manipulating the stock market from beyond the grave. This cyberpunk SF story is much more light-hearted than its companions in this issue, and the combination of Victorian clothing and architecture (mixed with flying cars) nearly gave the story a gothic atmosphere. Which is good, because the ending is far too happy for a typical Gothic or Cyberpunk story.

“Maquettes” by Paul St. John Mackintosh follows a sea-going man as he joins an expedition for magical Nazi artifacts sunk during WWII. Crozier gets to help halt the scheme but sadly neither we nor him get to know exactly what happened. Another sea set story, sadly with less horror or clear climax like the last one. In one paragraph the reader is taken from discovering Kaufmann being a crypto-nazi-druid to him being shot, to an explosion, to the main character having to keep himself alive by the skin of his teeth. While too much explanation is a bad thing, there is nothing to raise the stakes so that Kaufmann’s inevitable betrayal brings some other reaction other than “Of course the one German is the Nazi.”

A woman succumbs to her stillborn son’s ghost through gardening in “In the Shadows” by J.S. Watts. Clare sorrows for her stillborn child and believes that a growing shadow is the boy. The readers watch as she dives off the deep end into her madness, but there is nothing to compare it to but some half-hearted words from James as to her personality before her tragedy.

Western horror is appreciated in “‘The Spot’” by C.R. Languille. Graham has taken a turn watching ‘The Spot’. ‘The Spot’ has an edge of horror made stronger by a great build up and a confusing sequence of events that lead us to fear the spot yet more. What is ‘The Spot’? Why do they have to watch it? The first is not answered, but the second certainly is.

A monk watches a military experiment go poorly in “Schism in the Sky” by Donald McCarthy. Father Graham discusses with various characters whether or not God is evil as the tragedy builds. Sadly, the bomb that throws open a portal to heaven only brings horror. The theology within the story is simplistic and poor. The ‘God is evil’ statement is made and all logical assumptions go from this unquestioned idea which is laughed at by Father Graham’s superiors. The theology is discussed at a low level without proof, and while there needed to be a ‘God is evil’ position within the story, it is not felt outside the words.

A ghost is bound to the bridge she died on in “To Roam the Universe, Forgotten and Free” by Janet Harriett. The ghost watches as her husband seeks out ghost hunters to find her presence, but all he does is chain her down to her location, while she’d prefer to be forgotten and freed from her worldly desires. There isn’t much going on in this story, besides watching the husband grieve and search using ghost hunting equipment. The main message of moving on is there, but that’s all that can be said about it.

We get back to horror with “Rejuvenate” by Lily Luchesi. Endora Corpus finds new victims for her occult Corpus Circus. The feeling that this is ‘eldritch-lite’ is not a bad one, as the horrifying work that Endora does to keep the circus afloat has a fine balance of malice and direct intention.

Madness and death follow the malicious dead in “Vigil Night” by Lorenzo Crescentini. Joahn reflects on how he came to the sea and remembers that the dead came and wiped out his soldiers. While the descriptions of the dead and their servants are horrifying, the reactions of the soldiers and how it ends ruins some of the effect. Pulling us away from the horrific thing in the cage or the skeletal hornblowers chops up the effect rather than enhances it. There is also the question of why the soldiers were there if they had no defences against the attack of the mind that the dead put forward, or why there weren’t some power in a priesthood or similarly positioned religious or magical individual to rebuke or withstand the dead or just let the soldiers fight.

“Dead Clowns for Christmas” by L.J. Dopp has every child wanting their own Corpzo the Clown for the Christmas season. Hunter finds his under the stairway of his porch and brings it in. Of course, after that, things go quite poorly for everyone. This story is equal parts humor and horror that ends with it all being almost a dream. Corpzo is a great little clown thing and the placing of the children playing and getting what they want in a childlike setting next to Corpzo gambling with other Corpzos amused me to no end. Even the word ‘Corpzo’ is fun to say.

Reminiscent of Poe’s “Masque of the Red Death,” “The Tale and the Teller” by Darrell Schweitzer shows the hubris of a king bringing down his kingdom. Death comes and takes the princess from the king of a kingdom of negligent gods and two men go to find it, bringing disaster to themselves and failing to gain what they wanted. This story references Poe, Orpheus, Odysseus and famous marches into the underworld for some purpose. The rule “Whom the Gods would destroy they first make mad” is played to the hilt to create a solid and melancholy tale. The ending ties it together and still makes it yet more horrible by implying a loop that will go on forever.