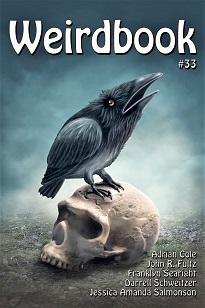 “The River Flows to Nowhere” by John R. Fultz
“The Amnesiac’s Lament” by Scott R. Jones
“Trance Junkie” by Bruno Lombardi
“Bad Faith” by Will Blinn
“Dwelling of the Wolf” by Franklyn Searight
“The Ruby Palace” by Jessica Amanda Salmonson
“The Screams at the Keyhole” by Garrett Cook
“Diary of an Illness” by C. M. Muller
“Teatime with Mrs. Monster” by James Aquilone
“Train to Nowhere” by Adrian Cole
“A Cure for Unrequited Love” by Donald W. Schank

When I last reviewed Weirdbook, just before Halloween 2015, I was in the mood for some scary terror. To be totally honest, I am not a horror or dark fiction fan, per se, but I am a fan of great story telling. As we roll into the Holiday season, I am curious to see if Publisher and Executive Editor John Gregory Betancourt with the assistance of Consulting Editor W. Paul Ganley and Editor Doug Draa can deliver stories that meet their own stated requirements for submission: “If you want to impress me then you need to ENTERTAIN ME!!” At 225 pages, packed with 11 stories of novelette or novella length, there should be ample opportunity.

The first story in this issue of Weirdbook goes to “The River Flows to Nowhere,” by John R. Fultz. A detective, “D”, is searching for a young girl of 19, Dorothy McIntyre, who disappeared into “the city” with her skull-on-black-leather-jacketed “Junk” using “boyfriend” Roach. But Roach wasn’t really her boyfriend. Shortly after kidnapping her from her mother, he sold her to “The Man in the White Limousine.” Turns out D and The Man have some history and things take a few interesting twists before a sudden ending without any real closure.

“The Amnesiac’s Lament” by Scott R. Jones starts with an interpretive discussion from one of “the Awakened,” “Sunset Grey Theremin” from the alien machines of the “Deep Dendo” in the Voorish Domes. One of the few of the 1000 or so who are not dreaming at any one time from the communal we’ve connected by the implants buried within each at birth using descriptive terms like “ghost” and “Shell,” immediately bringing to mind Masamune Shirow’s Ghost in the Shell. But this story does not have the possible future interconnected web of communications of Ghost. This story jumps from one disjointed-unsupported-random phrase-statement-technology-thought-fact to the next. Man I haven’t felt this confused since that time I experienced halucinogenicpshycotropicmindalteringdepressantethanolinducedeuphoriastupor. And that’s exactly what this feels like. Someone was tripping REALLY hard and wrote it down. Poorly.

“Bad Faith” by Will Blinn is a tale of kharmic horror. Max was once a young guitarist, in love with Amber who had once been attached to Tom, his band Grin Wild’s lead singer. Almost immediately after letting their relationship be known to Tom, Max’s life went from perfect to nightmarish and only after more than 20 years did the reason for his trials become apparent, after repeated 3AM visits by a tormented nightmare ghoul. A horrifically good read.

“Dwelling of the Wolf” by Franklyn Searight is almost a Little Red Ridinghood with a twist story of Lois, who dreams over a period of several weeks in nightly stages a theater of the mind, seeing a wolf living in a house almost killed by a huntsman who is attacked by the wolf. The wolf is killed by the huntsman’s silver knife but the huntsman is turned into a werewolf. The story and the dialogue are all very clumsily written. The premise that a college–aged girl would want to haul the carcass of a dead wolf back to her house and go through the process of gutting the beast and tanning its hide was just that. Clumsy. It was a struggle to finish the story and its ending was predictable almost from the moment the real huntsman appeared. Not very entertaining.

“The Ruby Palace” by Jessica Amanda Salmonson began as a tale of one Esben Danesworth, a swordsman, a courtier duelist of some repute, speaking with Gerard Rebeautout, a noble of some sort on a chill evening in the warmth of the “mysterious, well-famed inn” the Wind of Sorrows in the town of Aispont. With flourish and fanciful speech, warm spiced wine and heated chocolate after a fine meal, was it Esben who courted Gerard or the reverse? From the fluid rich tale that began arose finally a homoerotic tale of seduction. I’ve nothing against it but no desire to read it. But then said tale transformed into a royal command to service a blood-letting royal vampire, the princess of Ai, Tristianna Kramerlöf. “Another interesting day in Aispont!” Off to the Ruby palace our sapphic plebian duo ride to ascertain the intentions of the rumored succubus within her boudoir. The twists and turns which occur before the abrupt ending kept me engaged and entertained up to the horrific end.

“The Screams at the Keyhole” by Garrett Cook is a mythical tale of the pirate captain Elena Saavedra and her blue sorceress lover Ril, on an epic quest to find the witch who saved then betrayed her, taking everything the witch had given to Elena within the betrayal. Elena and Ril battle their way through an island of fish–like creatures only to be sent upon a further quest to retrieve the book Clavis, known as The Silver Key, from a cult of dreaming wizards intent on propagating nightmares upon us all. They must battle through the challenges before them and save humanity. Imagery is forged through liquid prose, firing the imagination. “It was going to be harder than they thought to track down the witch.” Again I have been entertained.

“Diary of an Illness” by C. M. Muller begins with Brent having recently been fired from his day job, staying home and sick and barely able to leave his bed, to be joined shortly by Samantha (Sam) who is also not feeling well. This progresses into rapidly degenerating health for Brent but Sam, who had read the shiny pamphlet from the new church that had suddenly sprung into existence across the street and seemed reborn after her visit, tried to urge Brent into action to visit as well. In his stupor he blindly stumbled through his fall into disease until he too finally went in search of the recovery, seeking the light of a new life. I’m not sure if this is a dissertation on the church sucking the life from a community in the false presentation that only it can return the light into your life, or commentary that only the church can save you from the degeneration of life’s struggle around you. It left me wondering. Which was the author’s true intent?

“Teatime with Mrs. Monster” by James Aquilone is quite the twisted story. I’m not quite sure if the young girl, eight year old Kylie, whose friend, Mrs. Monster, is the monster or if it is Kylie herself. I’m not sure if it is Kylie who is the reason her mother is no longer around or if her Daddy is the cause, but Kylie’s also eight year old neighbor Amy shouldn’t have made Mrs. Monster mad and Mrs. Monster is going to protect her from Daddy. I think Kylie has just a bit of a mean streak.

“Train to Nowhere” by Adrian Cole is another detective story, “From the files of Nick Nightmare.” Nick Stone is on his way to Artavian Wormdark, “the Main Man when it came to hunting down book treasures that no one else could unearth.” Nick has long sought a copy of a long elusive piece of pulp fiction and, upon receipt of his prized treasure, a sealed envelope appears, inviting him to join in a “thrilling journey to the Dance of a Lifetime” by Carmella Cadenza, the villain from the tome. Three days later he arrived at the appointed place at the defined time, to be led to a ferryman across the Hudson River before changing into his costume and joining a hundred or so others, before the Smokestack Lightning engine arrived at the train station. This was one great penny dreadful. Ghost trains to limbo land, street thugs and demons, beautiful damsels that were the distress. Just another job for Nick Nightmare, Private Eye, Public Fist.

“A Cure for Unrequited Love” by Donald W. Schank, is short and sweet. It tells of a prince in love with a palace courtesan who strings him along with demands for greater treasures in return for lesser recompense. The queen mother, with brutal wisdom, forever gifts her son’s once true-loved eyes, ensuring her son’s rule. The lesson here is never to piss off a woman (a queen) with power, for attempting harm to the royal family through her son will have consequences.

I have again found this a fantastic issue, and Weirdbook has met its promise to entertain.

Eric Kimminau is a BBS geek turned IT professional seeking fame or fortune in a world full of soulless corporations.