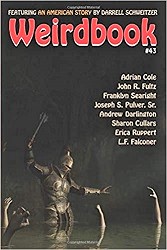 “An American Story” by Darrell Schweitzer

“Impervious to Reason, Oblivious to Fate” by John R. Fultz

“The River” by Sharon Cullars

“Taking Out the Trash” by D.C. Lozar

“The Fury of Angels” by Adrian Cole

“Will Home Remember Me?” by Joseph S. Pulver, Sr.

“Lucien Greyshire and the Ghost from Applebee’s” by L.F. Falconer

A wide range of fiction, from supernatural horror to dark fantasy to surrealism, appears in this magazine of imaginative fiction. The issue is dedicated to the memory of the recently deceased Joseph S. Pulver, Sr., whose final work appears in its pages.

“An American Story” by Darrell Schweitzer is a tongue-in-cheek yarn related at an English club, in the tradition of tall tales told by the fireside with a glass of whiskey in hand. The narrator relates how his father’s British friend grew a strange plant in his conservatory, with bizarre consequences.

The author makes several allusions to previous fictional accounts of weird flora, so the story is something of an in-joke for readers of fantastic tales. Wry looks at the differences between American and British culture are more amusing than the familiar plot.

Much more serious is “Impervious to Reason, Oblivious to Fate” by John R. Fultz. An indication of the story’s violent content appears very quickly, when the hero slaughters three warriors on the first page. He seeks revenge against an evil wizard, whose army killed his family and many of his countrymen. A mysterious visitor offers magical help when it is most needed.

This grim fantasy is full of bloody scenes of battle. The most vivid is a duel to the death in a pit of poisonous snakes. What happens to the hero in the pit adds an unexpected twist. Plenty of exciting action follows, but the hero’s unexpected ally is so powerful that there is little doubt who will triumph.

“The River” by Sharon Cullars takes place in a sort of limbo, the dreary afterlife endured by the amnesic souls of murder victims. Guided by an enigmatic mentor, a dead woman recalls her death, and is reincarnated. In her new form, with only partial memories of her previous life, she exacts a form of vengeance on the man who murdered her, and learns something about the inevitability of fate.

The author creates an effective contrast between the bleak realm of the dead and the gritty world of the living. The plot raises serious questions about justice and revenge, and whether we are truly in control of our lives. The main character’s reincarnated form comes as a surprise, and is depicted with great skill.

The main character in “Taking Out the Trash” by D.C. Lozar is a teenage dropout in a wheelchair who works as a dishwasher in a restaurant. One of his duties is depositing garbage into a dumpster in an alley. An acquaintance makes use of the deserted alley as a place to sell drugs, leading to a horrific fate.

Told in a realistic style, the tale provides a believable portrait of the working class and the criminal element in a big city. The plot is less sophisticated, resulting in a typical monster story.

“Arthur Wardrobe and Asia Anastacia: A Love Story” by Andrew Darlington appears to take place in a post-apocalyptic future world, although this is not completely clear. There are war machines battling in the air, devastated areas inhabited by deadly creatures, and many things that are even stranger. The narrator is visited by a woman who appears to him in many different illusory shapes. During one of these encounters, he makes a dangerous journey through the ravaged zones of a city, eventually finding the woman in her true form.

I have made this story sound much simpler than it is. Many events are difficult to understand, and it is likely that I have misinterpreted the plot. In any event, the eerie and melancholy mood of this nightmarish tale is appealing, even when it is not comprehensible.

The title of “Snack Time” by Franklyn Searight offers a hint as to its resolution, at least for readers of horror fiction. A man meets three children who seem to be homeless. They survive by begging and stealing. The man becomes their friend, mostly by giving them food, and they invite him to meet a group of supernatural beings who assemble in the park after dark. Thinking this to be no more than a game, the man agrees, to his regret.

As I’ve suggested, the outcome is obvious. The early part of the story, without overt fantastic elements, is more interesting than the rest.

“Godlike” by Edward Morris and Konstantine Paradias combines Mesoamerican mythology with cosmic horror, in the form of beings from the depths of space who assume the roles of deities. The style is dense and difficult, so the plot is hard to follow. In brief, the narrator, one of the cosmic beings, battles his brother, who rules over humans as a bloodthirsty god. Many other strange creatures, from tiny humans to giant centipedes, are involved.

The story is certainly unique and imaginative. Multiple readings might be required to fully understand it, a price some readers may not be willing to pay.

In “Ronkonkoma” by Glynn Owen Barrass, a woman sells her dilapidated family mansion to a man researching local legends. When the man is incommunicado for an extended period of time, she goes back to the place with a friend to investigate. Their search leads to a gruesome discovery.

The initial scenes have an eerie and mysterious mood, but the rest is a typical tale of supernatural horror. The nature of the unnatural menace is revealed in the middle of the story, making the climax predictable.

In “The Fury of Angels” by Adrian Cole, miners are killed by extreme heat in the depths of a mine. Similar fatalities follow outside the mine. A police detective investigates the deaths, enlisting the help of an expert in the supernatural. Their search leads to an encounter with a deadly being of great power.

The story involves concepts from Zoroastrianism, an unusual touch. The writing is vivid, with believable characters, but the plot is a simple one, with an ending that requires the intervention of a deus ex machina.

The title of “Keisha’s Dinosaur” by Nicole Givens Kurtz describes the plot in a nutshell. A dinosaur, apparently the product and/or property of a corporation, appears from a time portal of some sort, arriving in a near future world of flying cars and floating skateboards. A young girl witnesses the giant animal’s destructive wanderings, tries to protect it from police lasers, rides it as if she were a cowgirl, and finally watches it vanish back into the portal.

That’s about all there is to this story. There is no explanation for the dinosaur’s appearance. Although the creature kills people and destroys property, the event is treated as if it were no more than an exciting adventure for the heroine. This light work will best appeal to those who love dinosaurs.

It is almost impossible to summarize “Will Home Remember Me?” by the late Joseph S. Pulver, Sr. This work, which resembles a long prose poem more than it does a story, is written in a very eccentric, stream-of-consciousness style. There is much repetition. The word sigh appears on the first page more than twenty times, and the nonsense phrase tiger pancake octopus is repeated over and over, like a chant. As best as I can tell, this piece consists of the impressions and fantasies of a man returning to the outside world after time spent in an institution. I may be completely wrong.

There are some striking images, but many sections communicate nothing at all. It is possible that the seemingly meaningless parts of the work are meant to convey the so-called word salad associated with schizophrenia, but this is sheer guesswork on my part. Fans of the Beat poets, or of the more difficult works of James Joyce, may get more out of it than I did.

In “You’re Gonna Love This Song” by Michael S. Walker, a would-be rock star kidnaps a successful musician in order to force him to listen to what he thinks of as his masterpiece. As you’d imagine, this doesn’t work out well. Brief enough not to test the reader’s patience with its simple plot, this is a chilling, if minor, little tale of madness, with a tiny hint of the supernatural.

Even shorter is “Frozen Time” by Rivka Jacobs. The only surviving member of an Antarctic exploration team describes the bizarre thing they found under the ice. The discovery is a truly surreal one, unlike anything the reader might expect. Otherwise, there is little else to this brief story.

The title character of “Lucien Greyshire and the Ghost from Applebee’s” by L.F. Falconer is a man who was horribly burnt as a child, leaving him severely scarred over much of his body. His near-death experience gives him the ability to perceive the spirits of the dead. He meets a teenage poltergeist, and enlists his aid in providing special effects for a Hallowe’en party. As a sideline, he also happens to kill people.

The premise is an intriguing one, but the story stops before it really gets going. We never even see the party, because the narrative stops just after the man convinces the ghost to work for him. The reader is likely to be frustrated by the sudden ending.

Victoria Silverwolf thinks some of the stories in this issue are truly weird.