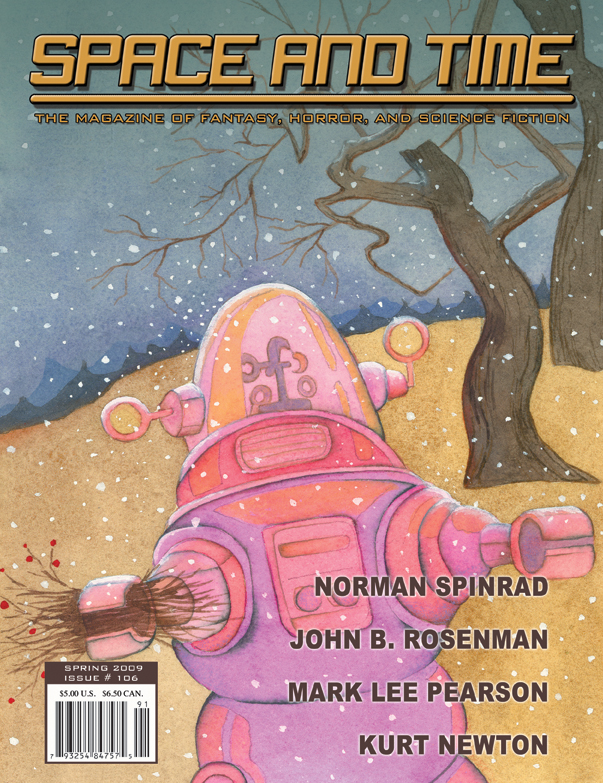 “The Woman of Your Dreams” by Norman Spinrad

“The Gift” by Rich Sampson

“The Beetle Eater’s Dream” by A. Camille Renwick

“A Wound So Great” by Wade Tarzia

“Since Adam’s Fall” by John B. Rosenman

The last time I read S&T, Gordon Linzner was the editor. This would have been somewhere around 20 years ago. Which, to me, would seem to mean that S&T should be at least semi-pro in quality if not in circulation. I believe you can’t produce a magazine continuously this long without learning something, after all. And the contents appear to bear me out.*

(*With the exception of the copy-editing and proofreading, which are inconsistent. They don’t even Americanize the British spelling in Faulkner’s story.)

“The Woman of Your Dreams,” by Norman Spinrad is written in what would be, for an inexperienced writer, the worst possible tense: first-person present tense. But the author of Bug Jack Barron, The Iron Dream, et al., takes it in stride and makes it readable, though not necessarily great. I’m not really sure that what I’ve read of Spinrad is altogether SF, though it definitely falls in the genre category; I think he defies category as best he’s able. Is this story of Gods and Heroes really about power and “Li-ber-ty”? Hmph. If you can figure it out, you’re doing better than I.

You could say it’s a mashup of Philip José Farmer’s “Riders of the Purple Wage,” with Biblical references and Greek myth and maybe a soupçon of Heinlein’s “Glory Road”; or is it? Is the author just having a bit of fun with forbidden fruit and today’s publishing freedom (Doubleday purportedly turned down Bug Jack Barron in part because of the explicit sex); is it a polemic about being societally (and otherwise) limited in our sexual expression? I think it’s worth a read, but I feel like I’ve read something like it before.

“The Gift,” by Rich Sampson is an interesting short-short. Every year for the last two years, our unnamed protagonist has found a nicely wrapped late Christmas gift on his front step. This year he won’t open it, though his girlfriend can’t understand why—in fact, it drives her crazy that he won’t. Is it Pandora’s box or something less sinister? Well written, though not entirely successful as a short-short.

“The Sleeper’s Awakening,” by Ian R. Faulkner tries to be hard SF, even to being set on another planet. (One confusing thing that detracts from the story is the name of the planet: “Llarroc Siwel,” which is Lewis Carrol backwards, obviously. But for what purpose?) Hard SF, though, demands that the science in the story adhere to known science, or at least extrapolate believably from same. As far as I know, telepathy has not been shown to be more than a statistical probability; there have been no rigorous test results that would place it firmly in the realm of scientific fact. Yet telepathy, and “Psychic Therapy,” are at the core of this story. That being said, the writing is good, and if you accept its terms, the story’s entertaining enough.

I have a problem, however, with fantasy masquerading as SF. Normally I don’t like to give away the crux of a story in a review, but I can’t discuss what’s wrong with the story without doing so. (“Wrong,” here, means “I don’t believe the premise for one second, and therefore find the story completely unworkable.”) The premise here is that a telepathic teenager, who comes out to the Rim worlds where “people supposedly care about each other,” is kidnapped by the Sagan Corporation’s subsidiary, SSI, thrown into a “tank” (similar to an isolation tank) and through a combination of drugs and VR, forced to control reality to the Corporation’s benefit, while asleep. The story is what happens when The Sleeper Awakes and, since he controls reality on Llorrac Siwel, people begin to disappear and worse.

Do you see my problems with this? First, we have to buy that a single teenager can control reality through conscious or unconscious shaping of the “standing wave patterns” that form all things; secondly, that he can be forced to shape it the way some Corporate bigwigs want (and why, if he’s that powerful, would the lower-level people in charge of him not change things to suit themselves instead of their bosses or their organization?); and thirdly, that if you can shape reality through dreams, you can do it coherently enough not to totally screw up everything everywhere.

Like everyone else, I dream. And one thing I know for sure is that dreams shift, and bend, morph and change. The reality you see in dreams is simplified, modified and not necessarily under your conscious (if your sleeping self can be said to be conscious) control. So how could you, why would you, put reality (even on one planet) under the control of a sleeping mind?

Sorry, I just don’t buy it as SF, though it kinda works as a story.

“The Way It Always Has Been, The Way It Always Will Be,” by Kurt Newton doesn’t try to be hard SF, though it has both an SFnal and non-SFnal basis. The basis here is Christian faith or theology, with a priest as the protagonist. A meteor shower on Christmas Eve brings about what may be the final conflict of light and darkness on Earth.

I found the structure, with “December 24, 2—- 7:55 p.m.” to be very clunky, and probably not necessary to the story. The description is good, the premise, despite meteors and the like, more fantasy than SF. Because I’m an agnostic, I found the writing good but the story wanting, though if you are a practicing Christian, you might like it better than I.

“The Beetle Eater’s Dream,” by A. Camille Renwick is SF without a doubt; I’m not sure the premise of a woman with no name living on a far future Earth by eating nothing but beetles, is quite believable, but it is acceptable for story purposes. The characters are as well drawn as they need to be for story purposes, and there’s enough action to make it a complete story of sorts. Although the ending promises a continuation, I think maybe it needs just a hair more “kick” than it has.

“A Wound So Great,” by Wade Tarzia is neither SF nor fantasy in the classic sense; maybe it would be called Magic Realism, but since I’m not terribly familiar with that type of fantasy, I’d just call it well written and totally confusing.

In this case, confusion for the reader is not necessarily a bad thing; the protagonist, Mike Pendergast, apparently lives in a bubble of time, outside which the world is continually being built and rebuilt. The visual I get is of civilizations rising and falling in moments, of mountain ranges being born and reborn. Inside the bubble, time also runs at an inconstant state; a loaf of bread can decay in a day. Power is available from a wall socket, water from a tap, and the refrigerator always has food.

Interspersed with the above are poetic, lyrical interludes that concern Atlantis, which may or may not be the Atlantis we’re all half-convinced existed. And then, finally, the present day intrudes. The title is from a poem, perhaps written by the protagonist, perhaps (who knows?) Atlantean.

I was thoroughly confused all the way through this story, but enjoyed it immensely. And I didn’t mind being confused, because for me fiction has the mandates to entertain, to teach, to uplift—not necessarily all at the same time—and this entertained me like a prose poem. Not SF, but then it never pretended to be. And I personally can empathize with the reunion of father and son at the end of the tale.

“Since Adam’s Fall,” by John B. Rosenman takes both a religious and SFnal view of life after death. Although many SF readers I know personally tend to be pragmatic and at the least agnostic, others are not. This story takes a quite different look at the subject than did Robert J. Sawyer in The Terminal Experiment, and I’m not quite sure that SF and religion make good bedfellows in this story. It’s well written in spots, but for me lacks a certain spark, which I don’t think is because I’m not religious, and I’ve never decided whether I believe in any kind of personal continuation after death.

The title doesn’t really have much to do with the story, except in a purely physical sense (the fall). Henry Marston lives in Nowan, Kansas, where the naked bodies of people begin to float down from the sky. They can be seen, recorded on camera, but they cannot be touched, nor do they interact in any way with the people on the ground. Are they the bodies of Earth’s dead? The story says they are, and that the military would attempt to co-opt them for military purposes. Which, given how we think of government today, doesn’t sound altogther unlikely.

“Hideki Desu,” by Mark Lee Pearson, surprised me. Since the title character, Hideki, is described as “a short, serious kid in a white button-down shirt and large horn-rimmed glasses,” I immediately had two thoughts: Hiro Nakamura, from the TV series Heroes; and, Oh, cripes, another Japanese story by someone who has only read manga and seen Japanese movies.

To the first thought, I can say, “well, maybe, in a way,” but to the second, “no way!” Pearson is obviously familiar with Japan, and that knowledge adds a certain vividness to the story that can’t be gotten out of books and movies; only first-hand knowledge will serve. (When you know what you’re talking about, it really shows.)

Gaijin (foreigners) are needed in Japan, because every Japanese sarariman (literally, “salaryman”) wants to learn English as a way to make more money, but Hideki has a novel way of doing so… he eavesdrops on gaijin dreams. Our unnamed gaijin protagonist meets Hideki on a Tokyo train platform and from then on things become more surreal than even a westerner familiar with Japan can imagine. “Hideki desu” means “I’m Hideki”—and by the end of the story you won’t have a clue who Hideki really is. Nicely done and quite fun to read, and you don’t need to know a word of Japanese to enjoy it.

“Born Free—Conclusion,” by Randy Heller and Jeremy Simser is only the second part of a story told in “comic strip” (“bande dessinée,” for us Canadians) form, so I won’t review it. I will say that I’ve always been a fan of artists who could draw well, and Mr. Simser has a nice, clear visual style that appeals to me.

If there could be said to be a theme to this issue of S&T, I guess it might be mysticism or the paranormal, if you believe religion of any sort to be paranormal. It has been said that religion or mysticism may be built into the human genome; if that is so, maybe that, not intelligence, is what makes us unique in the animal kingdom. I think this issue is a collection of interesting takes on this and other genre speculations.