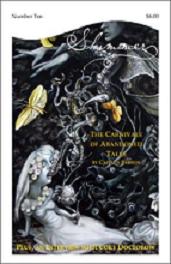 “The Carnivale of Abandoned Tales” by Caitlyn Paxson

“A Painter, a Sheep and a Boa Constrictor” by Nir Yaniv

“One for Sorrow” by Shweta Narayan

“The Fox and the King’s Beard” by Jessica Paige Wick

“What to Do with the Dead” by Claude Lalumiere

“The Spoils of Springfield” by Alex Wilson

“Counting Down to the End of the Universe” by Sara Genge

As I was reading the tenth issue of Shimmer, I thought of finger exercises. These are exercises that any great musician goes through to limber up their fingers and hands. They are usually short but very difficult exercises in preparation to playing that brilliant sonata or canon. They are not the great works themselves but they are pieces that are meant to get the musician ready for the greater works to come.

Shimmer’s twelve stories are finger exercises. They are unfailingly well written, which gives hope for the future of the genre. The genre in question is, for the most part fantasy, but there are also slipstream and SF pieces tucked in here as well.

“Blue Joe” by Stephanie Burgis is about a young sax player in a small band who is visited by his long lost father. The era seems to be just before and during World War II but is not stated specifically. Joe plays the blues with his step-brothers and hopes to make it big in the music world. His father shows up as a shape-changer – a raven, a wolf and a cat – at various times of his life. It is a bittersweet story about estrangement, loyalty and loneliness. This is an impressive beginning to the issue.

Caitlyn Paxson ’s “The Carnivale of Abandoned Tales” takes place in an odd circus. The story is built around the legend of Sleeping Beauty which warns us that to wake up into a world changed is not necessarily a happy thing. This is a dark fantasy combining many tales together – Rumplestiltskin, the girl who spoke and toads came out of her mouth, even Snow White if I read it right. All of these legends combine in one evening at a carnivale when sleeping beauty is awakened by her “prince”. Again a very interesting idea well told.

“A Painter, a Sheep and a Boa Constrictor” is one of the shortest tales in the issue but also my favorite. It was written in Hebrew by Nir Yanov and translated by Lavie Tidhar. This is a very short story that alludes to a whole society just outside the story itself that could be opened up into quite an interesting world involving “maker machines” and the stringent laws concerning the use of them. A small gem of a story.

The next story is a fable come to life for a little girl called Lainie. Lainie comes in contact with the local witch and learns that the witch’s story is a sad tale of treachery and abandonment. The witch’s story is completed with Lainie’s help. “One for Sorrow” is an ingenious fable by Shweta Narayan.

A bit of comedy is next with “The Bride Price” by Richard S. Crawford. It is a contemporary story involving the bride of Frankenstein in a modern day high school. Look for all the in jokes about Frankenstein – the book and the various movies.

I’d say that “Jaguar Woman” by Silvia Moreno-Garcia is magic realism. The titular woman is now involved with one of the Spanish that conquered her people in an un-named South American country. In it she struggles against her new role and her desire to become who she really is. In her mind she is a jaguar woman. Whether the magic is real or more of a metaphor is left up to the reader’s interpretation.

A witch shows up again in Caroline M. Yoachim’s “Firefly Igloo”. A young girl who is not fitting in at home – her family watches TV all the time and ignores her – finds some answers and friendship with the local witch.

The next story, one of the longer in the issue, is another fable. This one is much more dark and cruel. In “The Fox and the King’s Beard” a human king’s arrogance causes the king of the foxes to exact retribution on him. Jessica Paige Wick creates a bewitching story that is implacable in its attitude about the morals of this fantasy kingdom. Disney – stay away.

“River Water” is again a re-imagining of a legend, this time based on the Orpheus and Eurydice myth. This is not a straight retelling, so don’t expect to know how it ends. Allison is a taxi driver in Dublin whose beloved sister dies after being hurled off a horse. This story – being longer than most – is also more complicated. Allison finds a guide to the underworld and goes looking for her sister. It is a well told story set as fable.

Shimmer, in my view, seems full of fable-like stories. “What to Do with the Dead” by Claude Lalumiere (one of two authors whose names I recognized) is a tongue in cheek explanation of how five different groups of people deal with the corpses of their dead. All the various notions cause the gods of each land to be appeased or angry. The story is told from the viewpoint of a person in the final segment where we learn about how his people handle their dead – or almost dead.

The penultimate story is a horror story. I must admit that horror is my least favorite color in the speculative fiction spectrum, but “The Spoils of Springfield” by Alex Wilson is a commentary on the viciousness of contemporary society which is, perhaps, much worse than flesh eating zombies.

The final story, by Sara Genge (the second author’s name I recognized), is a horror science fiction story and my second favorite in the magazine. (I guess I like horror when placed in an SF context.) This is a clever story about what it might feel like to truly be immortal. What would you do, feel and want as you are “Counting Down to the End of the Universe”? It is a chilling and memorable story.

Again, most of these stories are short finger exercises that are smart and polished and point the way to some glorious “sonatas” by the various authors. Read this issue of Shimmer to get a look at the future giants of the field.