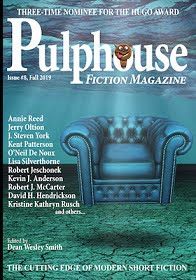 “The Hero of Calliope Springs: A Clockwork Cowboy Story” by J. Steven York (reprint, not reviewed)

Slightly less than half of the pieces in the latest issue of this quarterly magazine are new tales of science fiction and fantasy, with reprints, suspense stories, mainstream fiction, and a narrative poem adding to its variety.

The main character in “Eternal Flame” by Rob Vagle is a fire-breathing dragon. She has no knowledge of her origins; as far as she knows, she is the only creature of her kind. After much time passes, a flock of crows informs her of a dead dragon on the shore of the ocean. She flies across the sea, on a long and dangerous quest to find living beings like herself.

This story appeals more to the heart than the head. The protagonist’s plight touches the reader’s emotions, but leaves many questions unanswered. The setting is a world without human beings, for unexplained reasons. What became of other dragons is another mystery without a solution.

In “No Common Scents” by Jim Gotaas, a space traveler inadvertently violates the laws of an alien planet. The punishment is death in the arena, in battle with a deadly creature. The author treats this potentially serious plot as light comedy. The resolution depends much more on dumb luck than anything else, so the narrator’s actions are nearly irrelevant to the outcome.

“With Light Years Between Us” by Robert J. McCarter makes use of the phenomenon, familiar to most readers of science fiction, by which time slows down at extremely high speeds of travel. A woman spends twenty-eight years of her life on a starship, during which fifty-eight years go by on Earth. She returns to find her ex-husband an old man, not even making use of medical technology to disguise his age. The man introduces her to his granddaughter by his second wife’s daughter, hoping that his ex-wife will act as the child’s grandmother.

The characters are likable, and depicted in a realistic way. Less believable are the mechanics of the plot. It’s difficult to imagine that a young couple deeply in love would allow themselves to be separated by decades this way. It may also be hard to believe that they would be able to rebuild their relationship after such a long time.

“Taking Care of Business” by Mary Jo Rabe features the only Elvis impersonator on a colonized Mars. When his health deteriorates to the point where he cannot perform any longer, he enlists the help of a rocket pilot in a final gesture of his dedication to the King. The ending may be predictable, but is likely to appeal to romantics.

“A Night Under the Stars” by Lisa Silverthorne takes place in 1956 at a high school prom. The protagonist swallows a large number of aspirins before joining her boyfriend at the dance. It soon becomes clear that she is pregnant. Even darker secrets emerge before the conclusion.

As this synopsis indicates, the fantasy content of the plot is subtle. Some readers may overlook it entirely. Whether it adds anything to what is already a powerful and tragic story is debatable.

“Degrading” by Ezekiel James Boston is an extremely brief tale in which a man is in a room full of bound and gagged captives. This disturbing situation leads to a joke ending, with reference to a familiar figure from supernatural literature. The sudden change in mood is jarring.

The narrator of “A Warrior’s Death” by Stephanie Writt is a woman who is a soldier in a world of endless warfare. People called deadwalkers take away the bodies of those killed in battle. The woman recalls a particular death with a special meaning for her, and follows the deadwalkers to find out what becomes of the corpses they carry.

This story is most effective as a character study of the narrator, who reveals many aspects of her personality through her words. The setting seems more symbolic than realistic, with no reason given for the endless conflict.

In “Life, With Cats” by Annie Reed, a woman returns from a space voyage to attend her father’s funeral. In this future, such a ceremony consists of holographic scenes from the life of the deceased. The woman discovers that she has more in common with her father than she thought, and learns to be more empathetic to both people and animals. This is a simple fable, which walks a very thin line between genuine emotion and sentimentality.

The title of “Blackbeard’s Aliens” by Robert Jeschonek announces its premise clearly. The infamous pirate battles invaders from another world, making use of a secret weapon. The combination of swashbuckling adventure and apocalyptic war with extraterrestrials features plenty of action, even if it never seems convincing.

Victoria Silverwolf has been binge-watching The Untouchables lately.