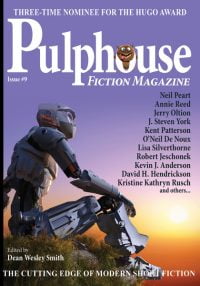 “Valley Girl Vampire to Save the World” by Stephanie Writt (reprint, not reviewed)

“The Warrior Women of Apartment 3C” by Annie Reed (reprint, not reviewed)

“Breathing in the Stars” by Robert J. McCarter

“The Networked Path of the Cyber Zamurai” by David Bruns

“Disturbing the Peace” by O’Neil De Noux (reprint, not reviewed)

“The Rhythm Method: The Percussor’s Tale” by Kevin J. Anderson and Neil Peart (reprint, not reviewed)

“C is for Sissies” by Kent Patterson (reprint, not reviewed)

“The Preacher’s Kid and the 2004 Red Sox” by David H. Hendrickson (non-genre, not reviewed)

“From the Good Old Days” by Jim Gotaas

“The Art of the Prank Phone Call” by Kristine Kathryn Rusch (non-genre, not reviewed)

“Planet Suds and the Sockpocalypse” by Lisa Silverthorne

“Flowers for Mother” by J. Steven York (reprint, not reviewed)

“For the Love of Books” by Jason A. Adams (non-genre, not reviewed)

“The Spinach Can’s Son” by Robert Jeschonek (reprint, not reviewed)

Of the ten original stories in this issue, seven fall into the categories of science fiction and fantasy. The others include a coming-of-age story, a psychological portrait of a character over many years, and a tribute to bibliophiles. There is also a comic strip to serve as a coda.

“Breathing in the Stars” by Robert J. McCarter follows its protagonist from childhood to marriage and fatherhood. From an early age, his greatest desire is to travel in space. A bad case of asthma keeps him Earthbound, but he learns to appreciate what he has.

The only thing that qualifies the story as science fiction is a brief reference to a mission to Mars in the middle of the twenty-first century. Although set in years to come, there is nothing else futuristic to be found. This is a moving character study, but would be more effective as mainstream fiction set in the present.

“Retired from Henching” by Ezekiel James Boston is set in a world of superheroes and supervillains. The main character used to be a supervillain’s assistant, but left when his boss married a superhero. Now she wants a divorce, trapping the fellow in the middle of a deadly battle between the two bickering spouses.

There is something appealing about the protagonist, working as a bus driver after abandoning his role as a minion. Technology makes him as powerful as the other characters, lessening the ability of the reader to empathize with him.

“The Networked Path of the Cyber Zamurai” by David Bruns continues the theme of superheroes. In this case, biotechnology creates them, and they work for business corporations, in emergencies that ordinary first responders can’t handle. The narrator discovers a plot by the founder of a virtual reality corporation to take over all superhero services, and fights him in cyberspace.

The mixture of superhero fiction and cyberpunk is unusual, but sometimes awkward. The ability of the narrator to enter cyberspace at will is difficult to accept, even in a world of superpowers.

“From the Good Old Days” by Jim Gotaas takes place in the far future, nearly a millennium after aliens successfully rebelled against a human galactic empire. The protagonist serves aboard a starship owned and operated by an alien. While investigating a region of space where other starships vanished, they discover an ancient vessel, empty of its human crew but controlled by an artificial intelligence. The AI thinks the war against aliens is still raging. The main character struggles to find a way to escape from its clutches.

The story is reminiscent of the Berserker series of Fred Saberhagen, but is less dramatic. The main character’s starship also includes a computer disdainful of human beings and a war machine with a sense of humor, but these mechanical characters play no part in the plot.

The title of “Planet Suds and the Sockpocalypse” by Lisa Silverthorne is a strong clue that the story is less than serious. A college student discovers that a laundromat dryer is a wormhole to another planet. Aliens invade Earth by taking the form of clothing, then altering the DNA of the people who wear them. The student travels through the wormhole, confronts the terrifying leader of the invasion, and finds a way to save the planet. This silly comedy will appeal most to readers who enjoy slapstick and absurdity.

The narrator of “Just Desserts” by R. W. Wallace is a ghost. Like others of his kind, he cannot leave the cemetery containing his body for a higher form of afterlife until he has completed unfinished business. The ghost of a murdered woman arrives. With the help of another ghost, the protagonist discovers the identity of the killer.

This is a most unusual detective story, filled with memorable characters, both dead and alive. It reminds me of Peter S. Beagle’s early novel A Fine and Private Place, which is high praise indeed.

“Obsession” by Jerry Oltion qualifies as a fantasy story because the narrator is a cat. The feline observes a woman working on sheets of paper. This seems to disturb her, so the cat tries to help, in a way that doesn’t quite work out. This brief tale is a mere bagatelle and something of an in-joke, with special appeal for magazine editors as well as ailurophiles.

Victoria Silverwolf is an ailurophile.