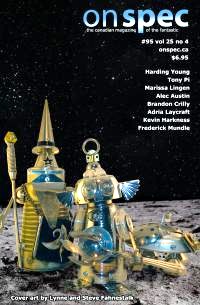 A man name Percy navigates a semi-apocalyptic city in Harding Young’s near-future science fiction “When Soft Voices Die.” On the move in a region quarantined because of a deadly and mysterious plague, Percy finds a small and needed respite in the home of two women. Together the three of them decide to host a party of the healthy as the sick of the city suffer and die around them. At its core Percy’s story is about surviving not just the possible end of the world but also the very intimate grief that comes from loss. Forced to decide how to meet the unknown, how to keep going after everything, Percy is faced with either staying in the relative comfort and serenity of his new friends or taking a chance at escape. Told with a flare of the romantic, with references to Mary and Percy Shelley and Lord Byron, the story resounds with a solid emotional core, and left me with a profound silence after the last word was read.

Tony Pi‘s “The Marotte” tells the fantasy tale of Vod, the former Lord Conjurer of a Tsardom whose ruler, and Vod’s lover, the Tsarina has fallen gravely ill. Set up by his rival, the Patriarch Damascu, Vod is executed only to find himself suddenly and magically inhabiting the marotte of the court fool Chero. Spells and unrequited love bind the two, and allow Vod and Chero to work together to expose Damascu’s treachery. The story is traditional fantasy with a few non-traditional aspects, including Chero’s homosexuality and the strange and striking gods that inhabit the world of the tale. Simple in its execution and effective in its delivery, the story might not reinvent the wheel, but it certainly brought me along for a fun ride.

Budding dark wizard Ivan must find the missing head to his new minion Dragon, with a little help from his older sister Violetta, in Marissa Lingen and Alec Austin‘s “The Young Necromancer’s Guide to Re-Capitation,” a humorous and young-adult-minded high fantasy. Hailing from a family of less-than-lawful-good parents, Ivan’s plans to re-capitate his newest monster servant hit a few snags as he, along with his trusted minions Hydra, Tiger, and Griffin, attempt to break into the home of the hunter who originally killed Dragon. Magical traps, complaining cooks, and the helpful intervention of Violetta all complicate Ivan’s journey, until at last he finds what he came for, though even then there are a few final surprises to keep him on his toes. Told in a charming and light style, the story flows effortlessly, with perhaps a younger audience in mind, though even so I found myself chuckling more than once. The story, setting, and characters are endearing, and the whole package solidly entertaining.

In Brandon Crilly‘s “Remembrance,” a tale of near-future science fiction, Anna tries to come to terms with her father’s military past and PTSD as well as his growing dependence on a technology that can take him back into his memories. The machine, given to him in hopes of improving his condition, becomes the only thing he cares about, providing him the illusion that those he has lost are not truly gone. Anna, frustrated with his lingering in the past, with her own powerlessness at the situation, struggles with his choice to retreat back to the familiar and not move forward. The story is short and moves well, but I was left feeling it was slightly incomplete, that it didn’t quite reach a conclusion. I liked the character work, but felt that the pieces of the story were left a bit separate and unjoined.

Survivors attempt to trust each other in “A Place to Be” by Adria Laycraft, a post-apocalyptic piece of science fiction where Dreya, a ranger for one of the last remaining settlements in Canada with power, meets Cam, an American who claims to be looking for a place to live. Set in a world devastated by pollution, with very little clean water, Dreya yearns for a place without fear, must balance her own want for community against her people’s distrust and desire to keep what is theirs. Told with an ecological angle, the story makes a number of good points but felt a bit forced in places, actions a little unjustified, a little rushed. Overall, though, I think the story works, showing what humanity remains after most of humanity has been wiped away.

Kevin Harkness tells the story of Mayor Tremblay’s visit to a local psychic in “Double Vision.” M. Tremblay, a stern man, mayor, and father, seeks out Chartrand, a man blessed or cursed with being able to see the true side of people, in order to determine if his daughter Camille has been stealing from him. Convinced he is the only moral man in a sea of sin, M. Tremblay thinks himself above reproach, but quickly finds that even he is powerless against a man who sees the truth of people. And faced with the prospect of his own secrets getting out, M. Tremblay has to decide if he will stand by his own convictions or justify the concessions he might have to make. The conflict and characters are convincing, but I would have preferred something a little less standard, a little less predictable. Still, the conclusion seemed earned and relatively satisfying.

Charles Payseur lives with his partner and their growing herd of cats in the icy reaches of Wisconsin, where companionship, books, and craft beer get him through the long winters. His fiction has appeared in Perihelion Science Fiction and is forthcoming from Wily Writers Audible Fiction and Dragon’s Roost Press.