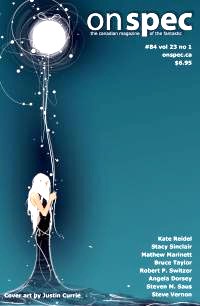 In “The Guardians” by Kate Reidel, Jeannie finds a path through the woods, where she meets Mellie.  They become best friends, sharing rides on Mellie’s pony and swims in her pool.  Neither of them has living parents, and that creates a bond between them.  Jeannie is cared for by her aunt and uncle, while a woman named Lissette looks after Mellie.  There’s something odd about Mellie.  She can’t leave her home, and no one but Jeannie can find the path in.

I found the idea behind this story appealing, but its execution is painful, a plodding regurgitation of Jeannie’s dull life.  Despite its length, there are gaping holes around the pivotal point of the plot.

Helen has terminal cancer in “Skipping Stones Until Nightfall” by Stacy Sinclair.  As she lies on her deathbed, Helen mourns the demise of her son, Will, five years earlier, and agonizes over what tragedy and her illness have done to her beloved husband, Jackson.

I’m not a big fan of this type of tale, but there’s no denying the quality of this one.  My only quibble – in my opinion, it’s not speculative fiction.  Yes, she sees her dead son, but most of the action takes place in her mind.  There’s nothing other-worldly about his death, or about drug-induced hallucinations, which I’d take her visions to be.

In “The Birds of Floor Number Forty-Seven” by Matthew Marinett, a little boy lives with his grandmother in a post-apocalyptic world.  He catches birds for them to eat, but they never eat Donna and Charlie, two mourning doves who come to visit, and to speak.  His grandmother ails, and she’s the only one left to care for him.  To fill her shoes, she calls on her neighbors, and ultimately on Rufus, the nasty man who lives downstairs.

I found this tale clumsy.  With a passive protagonist and very little plot, it failed to draw me in.

Edward finds a diamond ring on the beach in “Of Diamonds and Facets” by Bruce Taylor.  When he looks closely, he sees his own past in its facets, happy times as a child, and then the death of his father.  Edward is trapped in a loveless marriage, the mirror of the relationship between his parents.  Inside the ring, he talks to another version of himself.  His doppelganger gives him some advice, and a choice.

Had this story been more subtle, with characters that weren’t such whiny, overblown caricatures, I think I’d have found some depth in it.  As it is, it’s not bad.

In “Happy Elephants” by Robert P. Switzer, Marcel Lavack failed to rob Joe Kinloch, while Leslie Murphy picked up a telepathic message from elephant-like aliens who were visiting Earth.  They directed people to make better choices.  Leslie passed on the message to Marcel, who failed to understand, making another bad decision.  The aliens rescued him and did their best to demonstrate, showing their joy in dance.  Once more, Marcel tried.

This one feels like it reaches in the right direction, but falls short.  The writing style kept me at arms-length, and I found the characters cartoonish and flat.  I wanted to like it, but just couldn’t buy in.  Fans of absurdism might find this one engaging.

“Walled Gardens” by Angela Dorsey is the tale of Gisselle and Simon’s research with a group of zombie children, and one little girl in particular.  When she shows signs of life after exploring the walled garden, they decide to leave her there, and to call her Violet.  She continues to improve, looking alive once more, able to think and interact.  When she escapes, Gisselle finds her, but Violet is still zombie enough to bite.  Gisselle is certain she is now infected with the same contagion that killed her little charge.

Though a slow starter with a confusing beginning, this is a decent story.

In “Broken” by Steven M. Saus, a fairy gives the heartbroken father of a developmentally-damaged child a choice to make.

I liked this premise, and wished there was more to it.  It presents a difficult situation, but jumps from setup to conclusion without exploring its implications.

“Harry’s Mermaid” by Steve Vernon tells us of a fellow named Easter Noon, who is lounging by Halifax harbor with his friend Harry Moore, watching their buddy Jarvis Hawlett fish, and talking about regrets.  When Jarvis tries, and fails, to send his cast out deep, Harry stands up to show him how it’s done.  He hooks a mermaid.  Easter grabs the rod to throw her back, but it’s too late.

With clarity, pace, sly humor and an engaging voice, this tale is a welcome relief.  It was wonderful to find one I enjoyed reading from start to finish.

This is my first review of On Spec, and I really hoped I’d like it far more than I did.