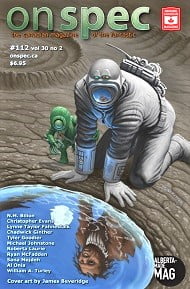 “The Door Not Taken” by Tyler Goodier
“M2K” by Sana Mojdeh
“Wing Twist” by Christopher Evans
“L’Orangerie” by N. M. Billon
“Cheating the Devil at Solitaire” by Chadwick Ginther
“A Child is Light” by Michael Johnstone
“Library Time” by William A. Turley
“Scales of Justice” by Ryan McFadden

The December issue of On Spec has nine first publication stories, including one flash story.

Onia’s SF short follows James, a college professor teaching a class on extraterrestrial life. He asks his students to study life in extreme environments on Earth and imagine how humans would adapt to life off Earth. When the students all had the similar idea of living in domes, James wonders what’s driving their common thoughts.

As James expands his assignments to aliens coming to Earth, he notices a similar commonality to the answers. All over the college, students follow trends and fads. What, he wonders, is driving these memes?

This was a slow story that only introduced a light speculative element at the end of the plot.

“The Door Not Taken” by Tyler Goodier

This short fantasy tells the story of an old duchesse and her maid. The Duchesse is growing senile, pining after something her maid, Bratati, cannot fathom. Then one day, Bratati finds a new door named Secret hidden in the kitchen, and a new adventure begins.

Bratati accompanies the Duchesse through the door into an enchanted land where imps and other mythical creatures challenge them. Deep in the valley of secrets, Bratati discovers the mystery the Duchesse left there seventy years ago.

Though the prose was good, the plot offered little to advance the fantasy genre.

Ella is running experiments with her A.I. in this SF short. The experiments revolve around quantifying her sensations, like eating a mustard, double ketchup (or M2K) sandwich.

The experiments and experiences flounder as Ella’s mind wanders back to her past when she was loving and lustful. Still the A.I. records her latest impressions.

The story was slow and hard to follow, and in the end had little to tell.

Raymond is watching the wasps in the backyard of his apartment in this flash fantasy. When the landlord’s son stops by, he says he’ll ask his father to buy pesticide. But Raymond can hear and commune with the wasps, and they have other plans.

This plot created a haunting mystery that did not go anywhere, leaving the reader to make their own conclusions.

This disturbing short SF describes a near future polluted with plague-bearing air. Marseau is running low on respirator filters and decides to follow a woman walking along the street, and thinks maybe he can steal her spare filters. After all, survival is a matter of dog eat dog.

After following her through the decrepit remains of Paris, he arrives at the museum, L’Orangerie, where finally she stops in one of the art galleries.

This was a haunting snippet of a story that should not be missed.

“Cheating the Devil at Solitaire” by Chadwick Ginther

This short fantasy deals with John, the family’s black sheep, who comes over on Christmas to help his Uncle Frank beat the Devil at solitaire. Few in the family believe the stories, but Frank and John do. Uncle Frank’s arthritis stops him playing, so now it’s all in John’s hands.

Losing to the Devil has consequences, so he must play until he wins or runs out of time, but it’s hard to cheat a cheater. Things aren’t looking good but then John finds a young cousin; maybe she can beat the Devil.

This story was amusing, though a little light on the speculative elements.

“A Child is Light” by Michael Johnstone

Johnstone’s short fantasy is set in a land where any baby born with a missing limb or digit is deemed a temak and taken by the pristers. The people believe that the temak encourages the darkness and must be destroyed. In time more babies are born as a temak and are taken from their distraught mothers.

After her first child is taken by the pristers, Evalina’s second is due any day and she hires a mage to ensure it survives regardless. But the pristers are keen to prevent the darkness taking over.

The prose was easy to read and the plot intriguing. A nice tale.

“Library Time” by William A. Turley

Sandy, a pre-schooler, is remembering tomorrow in this short and intriguing fantasy. She remembers being at the library and losing Tomato, her stuffed shark, and then Daddy getting upset with her. For some reason Daddy doesn’t remember any of this.

The next day she’s eager to get to the library. She looks for some books to take out, though she can’t read yet. When she can’t find Tomato, she knows he’s doing his job outside; maybe now Daddy will understand.

This was a story that engaged the reader from the start, a nicely crafted piece of mystery.

“Scales of Justice” by Ryan McFadden

This superhero fantasy short tells the story of Frank, or the superhero Paragon, as he’s pulled out of retirement inside the arctic circle to stop an old supervillain he’d killed years ago. Katrina, the woman he loves, needs his help as the supervillain’s gang kidnaps her.

But things have changed over the years since his retirement and isolation. But one thing that hasn’t is the price the world must pay every time he uses his superpower. Every move he makes costs some other innocent death in order to balance the scales of justice. Can he do what he must in order to help his love?

An interesting throwback plot to the old pulp-fiction superpower stories from bygone ages.