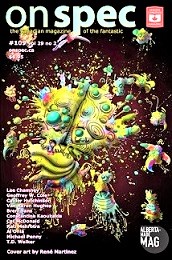 “When They Burned My Bones” by Lee Chamney
“Spirits’ Price” by Van Aaron Hughes
“Death is a Blindfold” by Rati Mehrotra
“Joyhound” by Calder Hutchinson
“Two from the Field, Two from the Mill” by Geoffrey W. Cole

The 109th issue of On Spec has six first publication short stories.

Onia’s SF short is set in the near future. When a mysterious object crashes into the Australian outback, it starts consuming matter, creating a void in the land at the site of some holy places for the indigenous peoples. Scientists around the world scramble to find a way to stop the void getting bigger.

The Australian Anangu have their own myths and legends around the creation and end of the world that may offer ways to deal with the growing void. Meanwhile, the scientists try to overfeed the void and then to starve it. Neither works. Is it time for a more radical solution?

The prose style was engaging, though the story didn’t provide many thought-provoking ideas.

“When They Burned My Bones” by Lee Chamney

This short fantasy tells the story of a ghost forced out from her haunting ground when the government pulls down the rookery and burn her bones trapped in the walls. This ghost of a murdered bridegroom must now search for a new place to haunt, in a world that has changed a lot since she died.

She tries many times to scare the living, but only encounters skepticism and hostility. Can she find a place where someone appreciates her?

This was a slow and uneventful story that offered little to grab and hold the reader’s attention.

The village’s Lorist, Averew, must choose which of his two children will inherit his powers in this short fantasy. His son, Stal, expects to take the power and use it to benefit himself and the village, but his daughter, Deena, sees the gift as an unwanted burden she would use carefully.

Averew uses his gift to see the future from each choice. But the vision is hard to interpret. How can he choose wisely?

This was an interesting tale that read easily and engaged the reader’s imagination.

“Death is a Blindfold” by Rati Mehrotra

Mehrotra’s SF short is set on a mesa in the New Mexico desert. Years ago, Armand and Coryn saw an alien craft here, and they meet on each anniversary in the hope of repeating the sighting. This is their tenth trip back to the mesa.

On the night of the visitation, the alien craft had bathed Coryn in a white light that seemed to pass through her body. Now, ten years later, she is dying of radiation poisoning and this is to be her last anniversary vigil. Is she hoping they’ll come back tonight?

The two characters were nicely developed, creating a natural conflict. But otherwise, the story offered little in new material for the SF genre.

This short fantasy describes a mobster who steals a lot of money from her boss, Bellini. When she’s summoned to his presence, she’s confident that she has hidden her treachery. But when she arrives at Bellini’s place, she spies a joyhound in a cage. This rare creature fills those around it with joy at seeing it, even as it eats them alive. She is trapped, it is clear Bellini knows everything and no one has been able to overcome the joyhound’s siren song.

This was a curious story that was nicely structured, though a little slow in the first half.

This is a short fantasy that considers a world after all the species of canine have floated away into the sky. Nadezhda, a hard-hitting pro hockey player, misses her beloved dog Bruno.

The erstwhile dog owners react in different ways, turning to religion, mysticism, or even a form of self-abuse. Nadezhda is tough though, as her sport demands, and avoids all the crazy ways the people around her behave. But in time the loss weighs on her and she finds her own unique way to compensate for the disappearance of Bruno.

This was a strange and intriguing story that was hard to put down. The prose was nicely crafted and the ending unexpected.