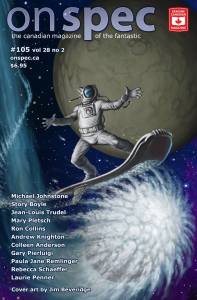 “Missing in Action” by Michael Johnstone

Appropriately, the latest issue of this Canadian magazine begins and ends with stories set in major cities in the Great White North. The tales between take the reader to outer space and into worlds of the imagination.

A retired superhero is the protagonist of “Missing in Action” by Michael Johnstone. Now living in Toronto under an assumed name, his true identity is discovered by a little girl badly in need of his help. He must overcome his fears, caused by the emotional trauma that led him to give up his career, to rescue her from a dangerous situation and allow her to develop her special talents. The author works hard to make the inherently fantastic world of comic book adventurers seem real.

“Trinkets” by Story Boyle is a brief, strange tale of a witch who steals the emotional connections people have to other living things. They take the form of insect-like creatures, which she paints and sells as costume jewelry. The story has little plot, beyond describing this bizarre situation, and may be intended as a rather opaque fable about human feelings.

Set on Titan more than one thousand years from now, “The Call of Freezing Souls” by Jean-Louis Trudel deals with people whose bodies are preserved at the time of death by being placed in the frigid hydrocarbon sea of that moon. A woman goes to the place where her father lies in an attempt to communicate with him. This story combines hard science fiction with speculation about the nature of death and consciousness. At times, it is as difficult to follow as the seemingly random messages received from the frozen brains of the deceased.

“The Wisdom of the Serpent” by Mary Pletsch is a fantasy adventure set in the typical medieval European milieu of such stories. There is, however, one element borrowed from Mesoamerican mythology. A young woman who is the daughter of a heroic warrior and a prostitute discovers the truth about her father and herself, in a world where humans wage a perpetual war against shapeshifters. This tale is likely to satisfy readers of sword-and-sorcery, although the outcome is predictable.

“Incident at Realm City” by Ron Collins is a farce about the daughter of the Emperor of the Galaxy, who has run away from home. While stopping at what can only be described as an interstellar convenience store, she is abducted by stupid, ugly aliens and held for ransom. This story will best be appreciated by those who like their comedy on the silly side.

“Words of Wisdom” by Andrew Knighton takes the reader to a version of Baghdad that never existed. In this alternate history story, a brilliant engineer uses clockwork mechanisms to spin the city slowly around. This has great advantages, but attracts so many people to Baghdad that they threaten to bring the city to ruin. A young woman who becomes the engineer’s apprentice solves the problem in a clever way. This is an unusual and captivating tale of technological wonders.

We return to Canada in “Sins of the Father” by Colleen Anderson. Set in Vancouver, it involves a woman whose father was a serial killer. She develops the power to infect the skin of the violent criminals she tracks down with a strange fungus. Later she must face a deadly monster. The author seems to be saying something about the effect of the evils of the past on the present, but the message is muddled when the story becomes a more ordinary tale of horror.

Victoria Silverwolf has been to Canada.