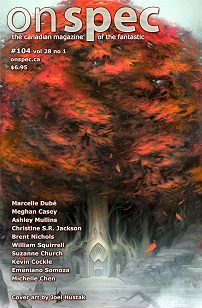 “Banewort” by Meghan Casey
“Second Born” by Ashley Mullins
“Liminar” by Christine S. R. Jackson
“The Hero” by Brent Nichols
“Heaven by Storm” by William Squirrell
“In the Shadow of a Broken Man” by Suzanne Church
“A Clockwork Barista” by Kevin Cockle

This issue of “the Canadian magazine of the fantastic” offers a tiny taste of science fiction, along with a generous serving of fantasy. Although its country of origin supplies a distinctive flavor to many of the stories, its menu is varied enough to provide something for almost any taste.

Set in a nineteenth century Montreal that never was, “Skywalkers” by Marcelle Dubé deals with supernatural beings who came to Canada with English colonists. Now, in the time of Queen Victoria, a young woman who senses something wrong in the uneasy relationship between human beings and these fey creatures must investigate a mystery. Although vividly written, with an intriguing background, the story features a protagonist who has very little effect on the events she observes, remaining a passive witness to supernatural conflicts.

“Banewort” by Meghan Casey is a variation on the familiar story of Little Red Riding Hood. The narrator, an orphan, is sent to carry a basket of mysterious objects to an old woman in the woods. Along the way she encounters a woodsman, who may not be all he seems. It soon becomes clear who the orphan’s true enemy is, and she must fight to survive. This is a fairly interesting twist on the old fairy tale, but the climax seems rather sudden.

A remote area of Appalachia in modern times is the setting for “Second Born” by Ashley Mullins. A young married couple desperate to have a baby uses folk magic to bring a drowned child back to life, intending to raise it as their own. Eventually the woman must decide what to do before her mother-in-law discovers the undead child, and before the couple gives it a normal sibling. The author creates a powerful backwoods fantasy.

The title creature in “Liminar” by Christine S. R. Jackson is a magical creature that changes its form constantly. It is kept in a zoo with other supernatural animals. Since it feeds only on people, the protagonist’s job involves bringing it human blood and tissue from organ donors. She develops a fondness for the beast and seeks to set it free. The story’s tone is an unusual mixture of dark and whimsical, even if the plot seems a little thin.

“The Hero” by Brent Nichols is a spoof of sword and sorcery, as a less than competent young man sets out to cross a bridge guarded by a troll who is equally inept. The humor is sophomoric, for the most part, but it may provide some chuckles.

England, in what seems to be a different version of the early nineteenth century, is the background for “Heaven by Storm” by William Squirrell. When the wife of an aristocrat dies, he enlists the help of a priest and an engineer in a mad scheme to bring her back to life. The priest preserves her body through embalming, while the engineer creates a vessel which is intended to reach the ethereal realm. Although the author is capable of creating multiple characters who come to life in rich detail,

the story stops at its most dramatic moment, leaving the reader frustrated.

“In the Shadow of a Broken Man” by Suzanne Church is narrated by a young man who confronts the ghost of his angry, abusive father, who is no less hateful after death than he was before. The narrator soon enters the ghost world himself, in a very unusual way, and faces the ghosts of his brother and mother as well. This portrait of a highly dysfunctional family packs a powerful punch, although the father is something of a caricature of an entirely loathsome man.

The only science fiction story in this issue is “A Clockwork Barista” by Kevin Cockle. Set in Calgary in the near future, this is a satiric tale of a man who suddenly loses his job without notice. In this world of instant communication and heightened paranoia, this immediately increases the risk that he will become a terrorist. Carrying firearms is nearly universal, and armed vigilantes quickly arrive to prevent the man, himself carrying a weapon, from attacking first. This might be intended to provide a Canadian’s sardonic view of the United States. Be that as it may, the story ends quickly, in a somewhat anticlimactic manner.

Overall, the writers seem to be young and gifted, with talents which have yet to be fully developed.