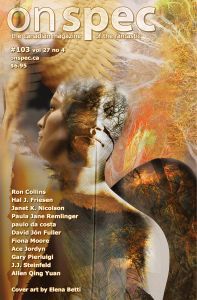 “The Guard Tower” by Hal J. Friesen
“The Skysinger’s Daughter” by Janet K. Nicolson
“Bored” by Paula Jane Remlinger
“Once dad, always here” by paulo da costa
“Not Fit to Print” by David Jón Fuller
“The Little Car Dreams of Gasoline” by Fiona Moore
“When Phakack Came to Steal Papa, A Ti-Jean Story” by Ace Jordyn

“Marvelous, Magnificent, Murderous” by Ron Collins is about a heist gone wrong. The narrator describes how he and his senior partner, Karin Mephistopheles end up stealing a ship after their robbery is discovered and the consequences that ensue. This story is fast paced, starting in medias res, and has the feel of a Mike Resnick take with a large universe and larger than life characters. The set up, development, and payoff are all well done and are satisfying, While not life changing, Collins writes an enjoyable story with an ending that feels satisfying.

“The Guard Tower” by Hal J. Friesen is more of a hermit finds human connection story than anything else. Bobbie Pritchard is an emotionally scarred woman who maintains a solar tower, a nod to the lighthouse keeper of old, when she has to accommodate the newcomer Pat. The story progresses exactly how you would expect. They develop a friendship which is cemented by a near tragic accident, and the grumpy old solar tower keeper reenters the social world of humanity, thus beginning the healing process of her long hidden sorrow. The writing is solid, but the story is completely paint by numbers with the setting the only science fiction element.

In “The Skysinger’s Daughter” Janet K. Nicolson creates an interesting world in which a Skysinger is necessary to keep the creative chaos of the universe from settling into uniform stasis. The narrator is the girl who must perform the dangerous ritual and save the village, despite what it may cost her. Nicolson uses the premise to explore the age old question of why we have to suffer. The plot itself is fairly predictable, but since it is designed to serve the idea and not the other way around, the story works.

“Bored” by Paula Jane Remlinger is a piece of flash fiction where the narrator contemplates a growing hole in his/her head. It is forgettable.

“Once dad, always here” by paulo da costa is a clever tale set in a world of constant surveillance and inherited debt where the only currency is lifespan. The narrator goes to visit the interactive headstone of her father, a famous terrorist/freedom fighter who has learned how to game the life extension lottery. As she converses with her father’s avatar, she learns that her father may be more alive than she thought. The world created is fascinating and I would like to see it more fully explored. Da costa does a good job of forming the outlines of the world with just enough material to make the reader want to understand it better. While the conclusion is a bit unclear, the writing is good and the ideas interesting. This particular story doesn’t shine, but the envisioned world holds great promise.

The best story in this issue is David Jón Fuller’s “Not Fit to Print.” Marion Greyeyes is a poor, working class, first nations werewolf. She is drawn into helping a bewildered news reporter who saw a colleague drinking the blood of one of Marion’s acquaintances. Set in Winnipeg in the 60s, it soon becomes clear that the murderer is a vampire. The author mixes interesting para-zoology with social, class, and personal conflicts in a way which seems entirely believable and which serves the narrative. There is a lot to like about the story, on many levels.

“The Little Car Dreams of Gasoline” by Fiona Moore is the story of a self driving car that has run off for some reason. In the course of the story we learn that the car’s AI is modeled on human learning and that they need to sleep too. The story is fun, but predictable and makes for a decent read.

“When Phakack Came to Steal Papa, A Ti-Jean Story” by Ace Jordyn concludes the issue and is an attempt to create the feel of a first nations (The journal is Canadian) oral myth. The author gets the feel right, it certainly has the shape of an oral history with mythic elements, but the story itself is uninteresting. If it were the real thing, it would have cultural and historical value, as a piece of fiction, it feels lacking.