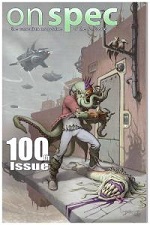 “Roundheels” by Carrie Naughton is a grungy paranormal fantasy whose protagonist, Tracy, stumbles into malevolent poltergeist activity during her one night stand. Late exposition hurts the reader’s ability to sympathize with Tracy’s motives.

In “Serenade on Lake Ontario” by Mike Rimar, Tony is determined to uncover the Nazi rat in his smuggling organization before he hightails it south to the United States. This Western style alternate history culminates in a good old-fashioned shootout as the reader learns who is double-crossing whom.

“Relocation” by Rich Larson is a riveting urban fantasy following Agent Dominique as she and her new, inexperienced partner swap a faerie changeling back for the real human baby. When the swap goes wrong, Dominique fears that a failed mission will mean the end of the career that she loves. Larson turns a trope into an engaging story with a satisfying twist at the end.

In “The Secret Dragon of Imperial Power” by Claude Lalumière, narrator Karim Khalil spies on the emperor of Imperial China as they travel on a military expedition to Khalil’s homeland, Venera. As the expedition approaches Venera, Khalil’s empathy for his traveling companions conflicts with his role as a spy. Karim Khalil’s reports detail the nearly supernatural fighting skill of the emperor’s elite guards and the advanced technology of China’s military in this character-driven alternate history.

“Shriek Season” by Wes Smiderle is set in the near-future where flying mag-rez houses mean that mobile communities can avoid the treacherous new global weather, but the houses come at a price, just like dysfunctional families. This first-person narrative follows a desperate pre-teen as he attempts to navigate his emotionally distant parents while repairing their house before the next shrieker. An unreliable narrator, immersive lingo, and a dash of poetic justice make “Shriek Season” a fascinating read.