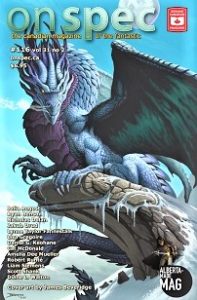 “The Opportunity Costs of Adventure” by Julia August

“No Such Thing as Magic” by Amelia Dee Mueller

“When the Mine Sang” by Jakob Drud

“The Bridge” by Daniel G. Keohane

“Do Turtle Quest?” by Ryan Benson

The June issue of On Spec has eight first publication stories, including one flash story.

“The Opportunity Costs of Adventure” by Julia August

August’s amusing SF flash story contains several emails from Stephen Greenwood as he grapples with the life of an adventurer. His excuses for not having time to take on a new project or complete an old one would make the best procrastinator proud.

The publisher spread this story across the issue with each email placed between other stories. Some of the excuses were entertaining.

“No Such Thing as Magic” by Amelia Dee Mueller

This short fantasy introduces Esther, a young lady accused of being a witch like her deceased mother. But Esther’s mother told her there was no magic, just their unique ability to communicate with the earth and trees. Her mother told Esther they were a part of the light and warned her to avoid the forest at nighttime.

Esther does her best to live up to her parents’ high ideals, but the constant snipes from the village girls drive her to dark thoughts and then dark deeds. And when the villagers torture her father to find her, Esther runs into the nighttime forest to meet her true destiny.

Though the prose was good, the plot offered little mystery to keep the reader engaged.

“When the Mine Sang” by Jakob Drud

Mirhel is mining for Poish in this SF short. The previous two boys who tried never returned, and Mirhel doesn’t fancy his chances much. But the mine foreman and three soldiers don’t let him back out.

The mages need the Poish, but it lies at the end of a long and narrow drill hole that’s too small for a man. When Mirhel reaches the end of the hole, he discovers why the Poish is so deadly, and all the warnings about touching or eating the black syrup seem futile. Worse yet, the officers never prepared the three soldiers for what is down in the mine.

The story maintained a good pace, and the plot was well structured. The story’s premise, though, did not feel original enough.

Duncan is a probationary captain assigned to deliver medical supplies in this SF short. They tell him it’s a routine delivery to the Blue-Mountain colony, but every time he tries to get specifics on the mission, he’s told it’s classified, though not secret.

The mysteries pile up as the doctor inoculates him while in a hazmat suit. His suspicions that they are setting him up as a new Typhoid Mary come alive when he becomes sick during his two-week flight. Docked at the spaceport, he must devise a plan to save the colony.

This plot created a light mystery written with a touch of humor, plus an unexpected ending.

“The Bridge” by Daniel G. Keohane

In this short fantasy, Cairn’s pet pursues Donny’s pet. The pets are angels that others cannot see and communicate telepathically with their helpers. Donny’s angel has a mystery to reveal, a secret that will change humanity for all time. Cairn’s angel must stop it before it becomes mature enough to spread its secrets.

After a brief chase, Donna carries his pet out onto a major bridge in Boston harbor. It’s a trap. Cairn’s pet is ready to blow up the historic bridge. An extreme move, but one it is willing to do to save humanity. Donny’s pet will have to make a decision too.

“The Bridge” was a haunting story where mankind has become pawns of an alien race’s war. It was a good read.

The author sets this SF short story after the collapse of all social platforms. Global warming has turned the world on its head, and people now vacation virtually. What they can’t do is share their experiences on any social platform.

Kate lost all the records of her life when the social sites collapsed. Now she finds her memory fading along with her body. A stranger offers a chance to reverse the common malady called thinning. Not that it worked on his mother, who was also thinning.

This was a curious and touching story. Though the opening page was confusing, the rest of the story was engaging.

“Do Turtle Quest?” by Ryan Benson

Tabitha is sent on a critical mission by Queen Elvine in this short fantasy. Primarily she is selected because turtles can’t move fast, and speed is a hazard this time. She has to rescue the last of the chipducks from a pet store.

The queen warns Tabitha that a motion detector protects the shop. What the queen does not mention is the magical weasake that also patrols the shop. And the weasake has some less than charming ways to protect its master’s possessions.

This was a beguiling snippet of a story that should be appealing to a young adult audience.

Shank’s short fantasy tells the story of Kaatso’s escape from the fifthform monster who imprisoned him. The monster had sewn Kaatso’s lips shut to prevent him from invoking his magic. Kaatso crashes ashore near a fishing village at the base of a sacred mountain.

Mute and wounded, he follows the sacred path to the altar at the top and a holy sword hidden there. Too weak to complete the climb, Kaatso must trust a village girl to help him, even as the fifthform comes ashore to recapture him. As he continues along the path, the monster eschews such banality and climbs straight up. It is a race to the altar.

The story was thrilling, but the author left the pace stuck in second gear all the way.

You can follow Kevin P Hallett’s writing on www.kevinphallett.com.