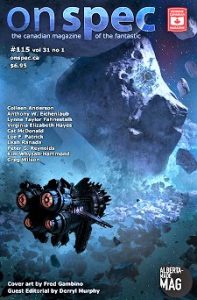 “Escape from the Sunset Vista” by Anthony W. Eichenlaub

“The Perfect Shot: The Adventures of Flick Gibson, Videographer” by Peter G. Reynolds

“And Should I Fall Behind” by Greg Wilson

“Pokey Potz, Come Out to Play” by Colleen Anderson

“Between the Worlds” by Lee F. Patrick

On Spec concentrates on stories by Canadian authors and has been around since I started writing. I was interested in seeing where it stands today.

The latest issue starts out with “Escape from the Sunset Vista” by Anthony W. Eichenlaub. Bastion is in a nursing home, having problems with his memory when he spots a drone hovering, then vanishing behind a billboard. It bothers him because it brings up some emotions from his past. All the other residents think he’s making it up, but one tells him that he needs to stop taking one of the pills he takes each day to know what’s really going on. Not a particularly new concept, but the story does an excellent job of portraying the characters.

Peter G. Reynolds’s “The Perfect Shot: The Adventures of Flick Gibson, Videographer” has Flick in a war zone where humans are fighting aliens they call “the squids” and being pinned down by one of their soldiers. Flick wants to get some basic footage of the war zone and maybe even something he could build a reputation on. It’s a lighthearted war story about the need to experience life, with an ironic twist at the end.

“The First Woe” by Virginia Elizabeth Hayes is set in a particular type of zombie apocalypse. PJ and Zeke are meeting on a blind date. The city has been overrun by an army, but the people fought back, and the army has brought back its casualties to control things. But this is more than just a date. The story tries to combine the awkwardness of a first date with the zombie story line, but I found it unengaging, mostly because the characters don’t show enough emotional depth to come to life.

“Self-Segmenter” is based upon Tagalog mythology about a creature that appears to be a woman, but who can detach its lower half to kill human victims. The narrator is one of these monsters and the story tells of her love for Arturo, who was fighting in the Philippine insurrection of 1899-1902 and how she was turned into one. Leah Ranada shines a lot on a forgotten part of history, but the story switches back and forth from its present to its past, making it confusing to follow. And I don’t think it really does enough with the concept.

“And Should I Fall Behind” by Greg Wilson features Georgia, a writer of fantasy, whose brother Robbie is dying. But Robbie is having strange dreams, essentially the same dreams their mother had when they were dying. And when a mysterious government agency suddenly takes interest, Georgia starts to wonder if they really are dreams. Well written and the characters are definitely of interest, though I do think the ending was a little bit glib.

“Pokey Potz, Come Out to Play” is the cry of the Irish monsters who bedevil Ireland and who taunt Penny Potchenko, one of the few humans who is still alive after their onslaught. Alone, Penny had to fight to survive, but knows it will be a losing battle unless she can figure out how to defeat them. Colleen Anderson ramps up horror and Penny’s desperation, in a story about how to rescue yourself. It’s OK, but I think it would have been better with more complexity in the situation.

“Between the Worlds” by Lee F. Patrick is set in a Scottish fishing village where Brecan gets a visitation with the words, “The Druid comes” after which he gets the biggest catch in years. Brecan has to keep an eye out for this Druid, who is needed for a particular ceremony, and is rewarded when a folklorist who has come to study the legends or the village looks like he might be him. But things turn out not to be what they seem. Much here about legends and their meanings and I did like the setup and solution.

What struck me as odd was that a magazine issue full of Canadian authors didn’t have any stories clearly set in Canada. In any case, there are some good ideas and nice execution in the issue.