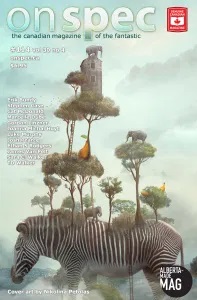 “After the War” by James Van Pelt

“The Gunsmith of Byzantium” by Stephen Case

“The Melting Man” by Gordon Linzner

“The Cold Time” by Marcelle Dubé

“Falling” by Luke Murphy is a ghost story where a psychic murders his spouse. The murdered spouse tries to protect the new wife from the psychic trying to get away with another murder. While the ending is a bit predictable, the story is interesting for the 21st century update of ghostly communications.

“Bone Stories” by Joanna Michal Hoyt describes a special library that makes bad memories bearable and the staff that inhabits it. Told through the eyes of the Porter, it’s an exploration of how people deal with the bad events of their lives and how to live with the memories.

“Pastrami on Rye” by Sara C. Walker is a story about the gift of music and recognizing it and passing it on. It’s not quite fantasy, not quite spiritual, but a good read for those who believe that no matter what the skill or training, soul is what separates the merely talented from the great.

“After the War” by James Van Pelt is a science fiction story that explores the question of what to do with defeated alien invaders who can’t be sent back home. The twist at the end makes it worth the read.

“The Gunsmith of Byzantium” by Stephen Case is one part fantasy, one part alternate history, another part spirituality. It is an interesting story about the last days of Constantinople, now known as Istanbul and formally known as Byzantium. Sad to say the story was ruined for the reviewer at the very end by the afterward that seeks to placate the Woke.

“Treasure Hunting a Husband” by Erik Bundy has perhaps one of the more humorous titles for a horror story this reviewer has run across in a while. The author spins an interesting tale that manages to pull off the unusual feat of a happy ending to a horror story.

“The Melting Man” by Gordon Linzner is a very odd story that defies easy characterization. One might call it a tale of second chances, roads not traveled or changing places. The twist at the end makes it worth the time to read.

“The Limbic Initiative” by Ethan S Rodgers is an interesting story about an android hiding and making a quiet life for itself in a world where androids are outlawed and hunted. The conflict in the story seems a bit contrived, but overall it is one of the better reads of this issue.

“The Cold Time” by Marcelle Dubé is a story that tries to craft a tale from a non-human point of view. The problem is that there are too many inconsistencies that throw the reader out of their suspension of disbelief. The most glaring one, without spoiling the story, is the protagonist is a being that lives in an underwater cave. At the same time the story talks about needing to breathe oxygen. Not recommended.