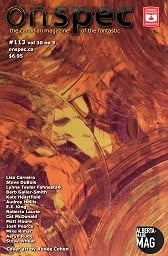 “The Back-Off” by Aeryn Rudel

“The Laughing Folk” by Steven DuBois

“On Hestian Cuisine” by Mike Rimar

“The Laughter of Playthings” by Matt Moore

An octet of fantasy stories, from superhero fiction to supernatural horror, appears in the latest issue of this Canadian magazine.

“The Back-Off” by Aeryn Rudel takes place in a casino. When the owner confronts a player who wins far too often, it leads him into a world of demons, vampires, and other unnatural beings. He winds up making a deal with the player, accommodating these creatures for a price.

The portrait of a gambling house and its security system is realistic and convincing, allowing the reader to accept the story’s fantastic content. After the author reveals the supernatural nature of the player, culminating in a scene of sudden violence, the conclusion becomes anticlimactic.

Set during the Second World War, “Remember Madame Hercules” by Kate Heartfield features two women who secretly possess superhuman powers. They use their incredible abilities to save a ship from falling victim to enemy mines, while protecting themselves from the government’s wish to take control of them.

The cynical protagonist and her more naïve friend are appealing characters. The skills they possess are so extraordinary that it is difficult for the reader to suspend disbelief, even in a superhero story.

In “Waking” by Lisa Carreiro, survivors hold vigils lasting several days after a relative dies, waiting for the dead to revive long enough to make a final statement. The main character is the servant of two sisters who make her hold vigil for their deceased mother in their place. The servant hears the dead woman’s last words, and makes use of the knowledge for her own ends.

The story has the feeling of a dark fairy tale, with exotic details that create an eerie, dream-like mood. Once the dead woman speaks, the way in which the plot plays out is predictable.

“Pan de Muertos” by E. E. King involves a young woman whose lover dies. In her sorrow, she bakes superb bread, eaten at funerals and the Day of the Dead. A man who lost his wife and child to death arrives at her bakery, seeking her famous creation. Their meeting changes both their lives.

In addition to this basic plot, the story is full of miraculous happenings, often involving the weather. The author presents these as if they were ordinary events, giving the tale the feeling of magic realism, appropriate to the Mexican setting. Although reminiscent of Laura Esquivel’s well-regarded novel Like Water for Chocolate, this gentle tale of love and loss is original enough to stand on its own.

The title of “The Laughing Folk” by Steve DuBois refers to elves, dwarves, and other fantastic beings, who return to the modern, mundane world. The narrator labors in an underwater mine for these creatures, seeking the gold that acts like an addictive drug on them. He launches an elaborate scheme to win revenge on his oppressors.

The plot moves at a rapid pace, almost with the feeling of slapstick farce at times. There are more than enough encounters with magical folks to fire the imaginations of readers, perhaps too many for some.

The narrator of “Sugar Mother” by Audrey Hollis goes on a first date with a new acquaintance after a painful breakup with her lover. The meeting takes place at an unusual perfume store, where emotions are for sale. The date wants to purchase the agony of the narrator’s loss, but the narrator offers a different emotion.

The idea is an unusual and intriguing one, made believable by many specific details. Otherwise, there is not much to this story beyond its basic premise.

“On Hestian Cuisine” by Mike Rimar deals with a mystical cookbook with recipes that are supernaturally literal. Angel food cake, for example, feeds angels. In return, the cook obtains locks of hair from them, to make angel hair pasta. Satan tricks the protagonist into making devil’s food cake, which will require the loss of her heart and soul, but she figures out a way to escape from this trap.

Although the notion seems whimsical, the story treats it in a serious fashion, so that the reader cares about the main character’s fate. The way she overcomes Satan leads to a weak ending.

In “The Laughter of Playthings” by Matt Moore, an architect discovers a large, elaborate playhouse on a dirt road. He takes it home, hoping that it will help him design his latest project. The young daughter of his lover plays with it in disturbing ways. The sinister story behind the playhouse emerges, and tragic events follow.

This is an out-and-out horror story, full of gruesome details about the evil behind the playhouse and its continuing malevolent ways. Fans of grim tales of terror will appreciate it, even if the theme of a sinister haunted object is not a new one.

Victoria Silverwolf is surprised that none of these stories is science fiction.