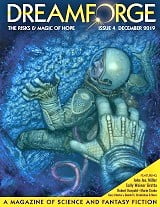 “The Ghost of a Smile” by John Jos. Miller

The December issue of the quarterly magazine DreamForge has eight first publication stories, including one flash story.

“The Ghost of a Smile” by John Jos. Miller

Miller’s short urban fantasy is set in London on a rainy day, when Richard ducks into an old bookstore to escape the rain. A mysterious lover of old books, he finds a rare Lewis Carroll first edition severely damaged during the Blitz and he accepts the store owner’s first exorbitant price on the spot.

The erstwhile owner finds herself moping around her store, missing the book that had been a large part of her entire life. Then one rainy day the same strange book lover enters her dusty store once more.

This was an interesting tale with an underlying mystery that made for a good read.

“Cessation of Civilization” by Marie Croke

A civilization student, Leigh, is doing her final project in this flash fantasy. Her chosen mentor watches as she prepares the rules for her new civilization before planting it in the garden. Of course, the project goes astray, and as she struggles to bring it back in line, her mentor gives her some timeless advice.

This was an interesting snippet of a story that shows that even the gods must learn their craft.

Ivy arrives in the past, in this SF short, to save her grandfather and thereby save humanity. She discovers in his diary that he has the cure for a viral infection that kills billions in her time, but he’s killed before it can be fully developed.

Almost immediately her carefully planned excursion goes wrong. It’s as if someone was expecting her and knew all her plans even though she was the only person who could know. Plan A is stopped, plan B, and even plan C. Can she think of a new way of saving humanity despite herself?

The story’s prose was nicely paced, but the plot’s mystery was too predictable to keep the reader engaged throughout.

This intriguing short SF describes a future where a new wonder drug, called LIV, promises to reverse the aging process. For the young it means eternal life, for the old the results are spotty, a few being only partially rejuvenated, leaving them with parts of their body young and other parts a century old. Hel and Garrett are two such older people who now live in Shady Pines, a LIV care center, where the ‘olds’ live because ‘youngs’ don’t care or want to see the ‘old’ people.

Garrett and Hel become friends, even lovers, as they spend their days tinkering in their old professions. Then one day, a gang of youngs tries to extort them and threatens the life of Hel’s demented husband.

This was an engaging character-driven look at the future. It was a wonderfully original idea about man’s attempts at immortality.

“The Last Petal” by Anna Madden

This fantasy short tells the story of a young woman, Lily, trying to help her father who’s fallen on hard times. A local merchant, Ashton, has grown rich selling a centaur’s pottery. He has eyes for Lily, but she hopes for a more morally acceptable solution to her money problems.

When she visits the barn and the centaur, she realizes that Ashton is exploiting his pottery skills. But does nothing until days later when she encounters Ashton whipping the centaur for daring to sell his own goods.

The characters and prose were nicely developed. But in the end, this story was too reminiscent of the first third of Beauty and the Beast.

“Beyond Our Hidden Stars” by Sally Wiener Grotta

Grotta’s SF short is set on a mining asteroid where Smith has come to the realization that her life is worthless while she works for the Corporation. She plans to go for a long walk under the stars until her air runs out, but, ironically, she can’t afford the air needed to be released to the surface.

After stumbling on an old-fashioned picture of a smiling woman, Smith finds a new purpose. Her friend helps as she tries to find that spark that is the human spirit of optimism. But the Corporation wants human bots, not creatives. Can she find a way to live both fully and not be ‘disappeared’ by the Corporation?

The prose was a little slow, though the characters were fully developed, and the plot well thought out.

Sergeant Cris Saldivar sits at the bottom of a thirty-kilometre hole in Europa’s ice sheet in this SF short. With him is Dr. Terry, the scientist in charge of the pod. Nearby is a remote submersible exploring Europa’s ocean under the ice. When Cris spots a potential algae-like life form, he wants to go diving to retrieve a sample. In the process he hopes to clear his tarnished family name.

But when Terry gets permission to take the dive instead, Cris feels that his boss has frozen him out unfairly. But such a mission is fraught with dangers and chances soon arise for Cris to vindicate himself.

This story’s plot felt overly simplistic and lacked the character development to make it a strong read.

This short fantasy revolves around Nordri, a dwarf. Not a dwarf as in Tolkien, but a dwarf imbued with magical talents like the ability to forge people’s dreams. A sorcerer has cursed Nordri so he must help people who are victims of other dream forgers. And one day he meets Madison, who can’t sleep because of her nightmares.

As Nordri helps the young woman, he discovers that he is being set up by one of his many enemies. One with a strong personal hatred of him. The easiest solution is to abandon Madison to her nightmares, but can he do that?

The story was almost novelette sized and used the length to spin an interesting tale with several action sequences.