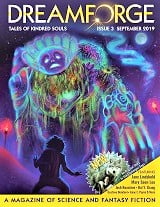 “A Question of Truth” by Jane Lindskold

“A Sip of Pombé” by Gustavo Bondoni
“Esclados the Red” by Isaac E. Payne
“The Specular Boy” by Hal Y. Zhang
“Fire in the Sky” by Scott Paul Hallam
“Wrong Turn” by Mary Soon Lee
“Fundamentals of Search and Rescue” by Jennifer R. Donohue
“Revolutions Per Minute” by Josh Rountree
“To Our New Home in the Stars” by George Nikolopoulos

In “A Question of Truth” by Jane Lindskold we meet Firekeeper, a human who, we’re told, considers herself to be a wolf, and is considered so by her actual-wolf companion, Blind Seer. They’re travelling with a jaguar named Truth, who has persuaded them to investigate an abandoned settlement. I found this story difficult to engage with. To begin with, the characters are merely poking around a deserted building. We know little about their motivations, and if they were human I suspect they would be entirely uninteresting—the ‘hook’ is that we have talking animals in the first place. The piece picks up around the middle with some action that, unfortunately, raises questions which are not entirely answered. The worldbuilding towards the end is good but is suggestive of a much bigger story; all-in-all it feels rather like a prequel to a much longer piece.

“A Sip of Pombé,” by Gustavo Bondoni, begins with Samuel Kyanbadde and his companion, Happy Odongo, travelling in an antique Land Rover to some sort of launch. It transpires that their ultimate destination is Mars, and we learn that the scrabble to claim ownership of land on that planet has resulted in polarized governments and increasingly authoritarian regimes on Earth. The journey, inevitably, doesn’t entirely go to plan. There’s some peril, and a nice twist half-way though. The relationship between Samuel and Happy is excellently drawn. This is a reflection on the way people aren’t their country—tidily knocking stereotypes out of the way and pointing out that, perhaps, humans could just cooperate with humans? A great story with lots of layers to keep the reader thinking.

“Esclados the Red,” by Isaac E. Payne, begins with the titular Esclados sipping from a wineskin as he remembers the ocean he is, currently, half a hundred miles away from. A woman, Salene, appears through a portal and we learn that Esclados has been unfaithful to his wife, Laudine. Esclados quickly finds himself in a fight, not only with a huge, enemy knight but also with his own nature. This is a sweet story, perhaps a tiny bit heavy-handed in the point it’s making, but sweet none the less. Esclados’ character is easy to like and I defy anyone not to find themselves rooting for him by the end.

“The Specular Boy,” by Hal Y. Zhang, is about a woman, Laura Herrera, who gives birth to some very unusual twins. The boys are connected in every way bar physically, and cannot bear to be separated. They mirror everything they do, to the point that they cannot even open regular doors, and Fernando writes in mirror writing while his twin, Eduardo, writes normally—the text completely identical. They believe that they are one person in two bodies, and have even adopted a single name, Hugo, which their classmates and teacher use. I found this a fascinating read, but it felt more like a case study than a story, ending rather abruptly with a comment from Hugo that he (they?) wants to be an astronaut, and “I won’t ever be hit by space trash because I can see 360 degrees,” just before he completes a joint action in a computer game. There’s very little conflict beyond an early encounter with a doctor who tries to test the twins. We see the boys interacting as one, but the ultimate consequences of this aren’t really addressed. It’s definitely an interesting and readable piece, but may be slightly disappointing if you prefer a more classical story structure.

“Fire in the Sky,” by Scott Paul Hallam, begins with a bullied boy, Jeremiah, who regularly visits the Shell Giants—two huge creatures that are being held captive on the South Carolina coastline. They’re kept in a cage, their skin is covered with shells and coral, and they glow with a blue light that can be seen for miles around. They came from the ocean, but no one knows how they got there in the first place, or exactly what they are, and they’ve essentially become a tourist attraction. The idea of the Shell Giants is a fascinating one, and felt entirely original. I really enjoyed this story, which explores bullying on both a small and large scale, and felt that Jeremiah’s arc was handled believably in what is a fairly short piece.

We’re told in the first sentence of “Wrong Turn” by Mary Soon Lee that Jozhou, the city of gold, is in the eighth winter of the reign of the Tiger Emperor—which sets things up nicely. A bruised and battered former soldier, Cheng, begins to beg for coins from his position in the gutter. An older man eventually takes pity on him and takes him to his home, where Cheng learns that his benefactor was once a member of the Imperial Guard. This is a strange little piece, which is very light on the speculative element—in fact, apart from a side reference to monsters, it might be argued that it doesn’t really have any. Nevertheless, Cheng is an interesting character, well developed, and the piece ends in a satisfying way.

“Fundamentals of Search and Rescue,” by Jennifer R. Donohue, is written in the first person, and begins with the main character picking up their bag and collecting their dog, Riddle, to go and carry out a search and rescue operation after the space elevator in Dubai breaks. The story continues as she finds a girl alive in the wreckage, and tries to get them all to safety. I suppose the title says it all, but for me this felt slightly over-researched (or perhaps the author is actually an expert in this area). We get a lot of detail about how the process works, how the training is done, and how the dogs interact both with humans and other dogs. I couldn’t help feeling that some of this was unnecessary, and we could have skipped to the action a little sooner. Still, like the title says, it definitely covers the fundamentals of search and rescue.

At the start of “Revolutions Per Minute,” by Josh Rountree, the main character, Rob, is awoken by the sound of magic on the river, decides that ‘Gabriel is at it again,’ and sets up a counter spell. His on-off girlfriend, Amy, doubts the reality of his abilities. We learn that Rob is a vinylmancer, attempting to use musical magic to protect the city where he lives. Soon, The Cult of the Black Circle summons him to an important meeting, explaining that the antagonistic Coven of Silence is making a play for power. There’s a lot of magic system in this story—perhaps too much for a relatively short piece—but it is good fun, and the ending works well. Rob is an interesting character, and there’s plenty of material here to build future stories.

“To Our New Home in the Stars,” by George Nikolopoulos, is a piece of flash fiction written in second person, addressing ‘you’—a navigator named Maria—in which the narrator tells us that they got everyone home safely. It’s a short and sweet ending to this issue of DreamForge.