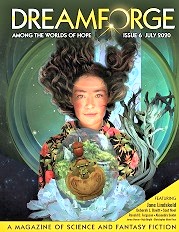 “Pterrors of the Caribbean Part-2” by Deborah L. Davitt

“The Shepherdess, the Roc, and One Errant Sheep” by Alexandra Seidel

“The Problem with Magic Rings” by Jane Lindskold

Issue 6 of DreamForge features a group of tales loosely themed around family, with a side-order of time travel.

“Kobold Domain Patch Notes,” by Christopher Mark Rose, is a flash piece that essentially details the notes of someone trying to patch his late dad’s role-playing game, with limited success. In a short space, the story cleverly twists to become about how, sometimes, we just need to let things go.

“Pterrors of the Caribbean Part-2,” by Deborah L. Davitt, continues the story from the last issue, which straddles Port Royal, Jamaica, 1721 and Santo Domingo, 2170. In part 1, adult pterosaurs had appeared in the past, and now Ruby Chiyoko Estevez heads back herself, and goes looking for Anne Bonny in an effort to restore the timeline. As is often the way with time travel stories, a bit of concentration is required here to make sense of the back and forth, but it’s worth it. A solid ending to this two-part story.

In “Mothers Know Buttons,” by Nyla Bright, Hal, a personal digital assistant, argues with a mother, Bonny, about the best way to deal with her daughter’s claim that she has a button stuck in her nose. This is a sweet little story, although the ending is perhaps a tad predictable.

“Never the Twain,” by Ronald D. Ferguson, begins with the main character, Sam Clemens, leaving as his mother says she’s bolting the doors at dusk. She, it turns out, is afraid of nights—but are her fears justified? The story is set in Hannibal, Missouri in 1847, and features Tom Sawyer, but unlike the well-known Mark Twain novels, has a supernatural twist. Or perhaps it’s all a bald-faced lie. Who knows? Either way, it’s certainly a tall tale.

“Pangenesis,” by Scot Noel, tells the story of Liv, who is in something called a Build, floating above the moons of Jupiter. Early on she is warned that this is not a simulation, and authenticity is in play—introducing a note of jeopardy to the proceedings. This is a complex story that, again, involves movement through time, as well as through universes. The world-building (literally) is excellent, Liv is a strong character and the ending is very satisfying.

“The Shepherdess, the Roc, and One Errant Sheep,” by Alexandra Seidel, begins by telling us that the roc arrived on the island “like a bad dose of flu”—aptly setting the tone of the piece. A shepherdess has come to apprentice with the kirke (island witch) and, as often the way with apprentices, finds herself doing a job she finds rather uninteresting (actual shepherding) rather than learning about exciting witchery. Naturally, she’s about to learn something important. This is a fun, silly, story with snappy dialogue: a real joy to read.

At the start of “Silent Partnership, Part-1” by James Verran, a small shark-like creature tears the bait from a researcher’s trace line, preventing him from capturing a shot of a larger beast on camera. It transpires he’s not on Earth, but rather a planet named Xiros, and has been sent to test a “repeller” with the ultimate aim of safely exploring the alien seas. But the project isn’t quite going to plan, and strange things have been happening. As the title suggests, this is Part 1, with Part 2 coming up in the next issue—and it looks like it’s going to be fantastic.

In “The Problem with Magic Rings,” by Jane Lindskold, the point of view character is a small dragon, partnered with Princess Snowdrop. The two are talking to a female wizard named Yarrow, who tells them that she wants to find a ring she’s lost and which she believes is currently in the possession of another wizard—who is Princess Snowdrop’s older brother. Thus begins an adventure story featuring wizards, a princess, a dragon, a snake and, of course, the titular magic ring. It’s great fun.