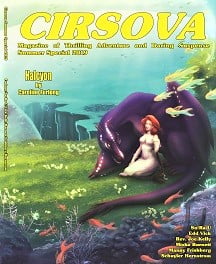 “The Ghost of Torreón” by Edd Vick and Manny Frishberg

“The Bullet From Tomorrow” by Misha Burnett
“The Star-God’s Grave” by Schuyler Hernstrom
“Bleed You Dry” by Su-Ra-U
“The Last Fortune of Ali al’Ahmar” by Rev. Joe Kelly
“Halcyon” by Caroline Furlong

This special issue (separate from its quarterly issues) of the self-described “magazine of thrilling adventure and daring suspense” offers five novelettes and one novella. The stories take place in the past, the present, and the future, with settings including Earth, distant planets, and worlds of fantasy.

“The Ghost of Torreón” by Edd Vick and Manny Frishberg is a tale of weird science set during the Mexican Revolution. While experimenting with electrical equipment, a scientist accidentally gains the ability to transport himself via radio waves. At the urging of the young woman who serves as his assistant, he joins the battle against the oppressive rulers of his native land.

The most interesting aspect of the plot is its historical content. The authors know a great deal about the time, and depict the conflict in convincing detail. Modern readers may find the story old-fashioned, perhaps deliberately so. At times, it reads like a pastiche of the kind of “scientifiction” found in Hugo Gernsback’s magazines of the 1920s.

We jump forward about half a century with “The Bullet From Tomorrow” by Misha Burnett, which takes place in Los Angeles in 1965. Appropriately, this is a time travel story. The narrator is a private detective. A man from the far future hires him to prevent a plane crash that started an atomic war. The detective uses his skills and daring to save the world, while keeping an eye on his employer, who knows very little about the Twentieth Century.

In most ways, this is a mixture of traditional crime fiction with familiar science fiction themes. One unusual feature is the fact that the narrator is gay. He mentions this only casually, and it does not form an important part of the plot. This matter-of-fact attitude about his sexual orientation is refreshing.

The reader leaves Earth and travels to the far reaches of space in “The Star-God’s Grave” by Schuyler Hernstrom. At first, this seems to be a tale of fantasy, as a magician’s apprentice fails to advance to the next level of sorcery, due to his lack of social connections. He steals his master’s starship, and the story suddenly becomes space opera. Two adventurers hire him as a pilot; it seems that only magicians can operate starships. Their quest is to obtain a priceless item from inside the gigantic body of a dead humanoid being on a faraway world.

The story moves at a breakneck pace, with plenty of plot complications and bizarre dangers for the heroes to face. The transition from fantasy to science fiction is disorientating, and may dismay those who prefer a smoother mixture.

Back in the modern world, “Bleed You Dry” by Su-Ra-U is a horror story narrated by a reporter. In a prologue, she explains that she lives in constant fear, rarely leaving her house, and never after dark. A flashback reveals that she investigated a secret ritual conducted by the elite, barely escaping with her life after a night of bloody terror.

Fans of gruesome horror fiction will appreciate the author’s ability to describe ghastly violence and unnatural menace vividly. The supernatural being at the heart of the story is a unique creation. Unfortunately, the prologue offers too strong a hint of its nature, lessening the impact of its appearance.

“The Last Fortune of Ali al’Ahmar” by Rev. Joe Kelly is a sword-and-sorcery yarn set in an imaginary world resembling a fantastic version of the Middle East. A merchant hires a pirate captain and her crew to find a fabulous treasure. Their journey plunges them into deadly battles with men and monsters, requiring swordplay and spellcasting to survive.

The tough, cynical, hard-drinking protagonist is appealing, and her companions are well-developed characters. After many strange encounters, the outcome of their adventure comes as something of an anticlimax.

Ending the issue is a science fantasy novella set on a distant world. “Halcyon” by Caroline Furlong begins with a man held captive by brutal aliens. With the aid of an unexpected rainstorm, he escapes and sets his fellow prisoners free. He and one of the women he rescued meet the benevolent, dragon-like beings who are the original natives of the planet. They live underwater, protected from the liquid by invisible shields. After some debate, they agree to join forces with the humans and destroy the sadistic invaders.

Despite the science fiction elements, this story has the feeling of a fairy tale. The handsome hero and the beautiful heroine share a pure, innocent love rarely found outside the pages of a romance novel. The scenes in which humans ride dragons into battle will inevitably remind one of the works of Anne McCaffrey. Although suffering from a lack of originality, this romantic tale will appeal to those seeking escapist literature.

Victoria Silverwolf has been binge watching The Naked City lately.