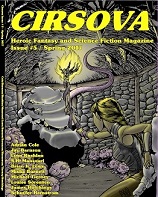 “War of the Ruby” by Brian K. Lowe

“Darla of Deodanth” by Louise Sorensen
“In the Gloaming O My Darling” by Misha Burnett
“The Queen of Shadows” by Jay Barnson
“Beyond the Great Divide” by S. H. Mansouri
“The First American” by Schuyler Hernstrom
“Through the Star-Thorn Maze” by Lynn Rushlau
“The Bears of 1812” by Michael Tierney
“A Killing in Karkesh” by Adrian Cole
“Shapes in the Fog” by Brian K. Lowe

In the short story “War of the Ruby” by Brian K. Lowe, Tal Shar Anog’s alleys are ferocious, mystical and covered by a haunted and terrifying fog. Lannic’s bedroom, however, tonight becomes even more dangerous and life threatening for him and Senela, his recent companion, than the creatures that crawl in the fog outside. This malicious situation is almost certainly related to the precious artifact Senela stole recently. No matter what, Lannic will not allow anyone to hurt Senela.

Lannic becomes a favorite character soon enough, mostly because of his combat skills, his courage to fight against every single foe, and his ability to make a quick decision under extreme pressure. Along with Lannic, you can find mysterious artifacts, deadly battles, and monsters inspired by Eldritch nightmares. A pleasant combination making for a fine read.

Next comes the short story “Darla of Deodanth” by Louise Sorensen, and as the title states the main character lives in the city of Deodanth and makes a living as an adventurer for hire. One day though, a mission that started as an easy one, ends up threatening her life. For, when she was asked to find Kellonia’s lost dog, she would never have guessed that the person behind the disappearance was an Elder. In any other case, Darla would have freed the dog and run away. The contract she has signed, though, states something that convinces her to stay.

Darla goes through a lot of trouble to save a lost dog, and she decides to go through even worse trouble to honor a deal. Her motives though, far from the signed contract with Kellonia, are not clear. A nice read with a well-designed, and even better described, flesh-eating garden and a very skillful adventurer walking through it.

If someone does not have a choice to run away, it is Tak and Michorn, the main characters of the short story “In the Gloaming O My Darling” by Misha Burnett, who are chained on a beach, waiting for an elder mother to come out of the sea and mate with them. The two young men, both victims of a custom that calls for human sacrifice, don’t have any other choice, each being abandoned by his loved ones, waiting for their lives to end. Life becomes a value again when they see an opportunity to escape their upcoming martyrdom.

This is an interesting story with a couple of creepy plot twists. One character is humorous, the other pessimistic. With this emotional difference between the two characters, the author manages to narrate their background and circumstances that chained them on that beach. Both Tak and Michorn are interesting, sad, and funny at the same time. What also made me curious to read more was the foreshadowing of the Elder Mothers.

In the short story “The Queen of Shadows” by Jay Barnson, Jorgan is searching for his sister, for he suspects she is in great danger. After he discovers her, he realizes, though, that the person he recalls as his sister might not be the same anymore. The author successfully relates Jorgan’s care and worry for his sister, and we support him on his adventure from the beginning. The highlight of this story is Jorgan’s badass-ness and the way he reacts against each obstacle on his way. Even though the plot seems predictable, there are some surprises that place the story into the Eldritch fantasy genre rightfully.

Slagborns and the rest of the insectoids are not killing for joy in “Beyond the Great Divide” by S. H. Mansouri. They have instructions, just as ancient as their home, the Great Divide. They need to eliminate humans because they don’t deserve Earth. A fact which couldn’t be clearer, since it is coming from SB-13, a Slagborn.

Through SB-13’s sensors we get to see how humans are perceived by an insectoid, and we get a glimpse of the legendary Great Divide. There is also a series of suspenseful combat scenes, so well-written they make you forget you are reading from the point of view of the monster. The method of communication among the insectoids and SB-13’s opinion of humans gives a certain protagonist the sympathy normally given an anti-hero.

Seeing the title, you want to know who the first American is in the novella “The First American” by Schuyler Hernstrom. One thing is sure; you will be surprised by his identity. The story begins with its protagonist, Tyur the mighty hunter and his tribe, hunting prehistoric beasts. During a tragic accident and after fighting their prey, Tyur’s best friend, Ner, is lethally injured. With his dying breath, Ner asks Tyur to take care of his sister Vara. When he returns to his village though, Vara and two other young girls will have been captured by a Dryth, a reptilian race, in a raid. Tyur does not listen to the elders’ advice to stand down and accept Vara’s dark fate. He will begin a journey to the land of the sun god to bring back his loved one. To do so, he needs to visit the only man known to defeat the Dryth in the past and ask for his assistance. That man is the infamous Sorcerer. Thus we have a plot that unravels secrets within secrets coupled with non-stop action that holds you in suspense and with every passing moment you hope Tyur can save Vara. It all comes to a well deserved ending that brilliantly combines the fundamentals of eldritch fantasy with science fiction.

In the short story “Through the Star-Thorn Maze” by Lynn Rushlau, Corree, a slave who is sexually harassed by the abusive and psychopath Sir Trahan, seeks to escape the Citadel. To achieve her plans, she needs to go through the Star-Thorn Maze, a place that only a few can walk without being captured. Corree tries to convince Lark, a man who knows his ways through the maze, to help her, while Sir Trahan is getting more and more suspicious. The most interesting part of this story is that each character has weaknesses and motives behind their actions. A set of genuine dialogs helps us visualize most of the setting, and even though it lacks action, it has a suspenseful theme which grabs your attention.

The next historical fiction short story “The Bears of 1812” by Michael Tierney gives a supernatural touch to the historical “Burning of Washington,” a British attack against Washington, D.C., during the War of 1812. Some years before the event, during the exhibition of Captain Meriwether Lewis and Lieutenant Clarke, the two men decide to take two cubs of a grizzly they had just killed despite Sacagawea’s warnings. The native American claims that the cubs are cursed and that they should lift the curse first. During the “Burning of Washington,” Sacagawea is requested by the first lady, Mrs. Hamilton, to assist with a spiritual intervention against the British invaders, which is directly connected to the two cursed cubs. The author takes you away from Eldritch nightmares and prehistoric terrors to more modern times. Even though I expected a strong supernatural touch to the post-American Revolution era, the spiritual element was not as strong as anticipated.

In the next short story, “A Killing in Karkesh” by Adrian Cole, we follow the Witchfinder Arrul Voruum and his young assistant Kaspel in their investigation into the treacherous alleys of Karkesh. To complete his mission, Arrul is willing to fight and kill every one of Shaitan’s cultists even if it means he must sacrifice his own life. Nonetheless, there are more dangerous entities than cultists at the end of their already deadly mission. In an attention-grabbing game of assassins, each battle becomes even more mystical and gory than the last one. The setting is so cleverly narrated, that in association with the perfectly designed character of Arrul it creates and excellent read.

In the last story, and for the second time we find the author Brian K. Lowe and his story “Shapes in the Fog.” Once again in the horrifying fogs of Tal Shor Anog, the protagonist is magically falling for a stranger, and unwillingly she becomes a witness to a hideous crime. Will she escape her paralytic nightmare or is she the next on the supernatural killer’s list?

The author psychologically and physically tortures his character in a setting terrorized by the Eldritch secrets crawling inside the fog. A very interesting element is the way the two stories are connected, which is the scene where Lannic, the protagonist of the first story, is shouting in a local tavern for another tankard.