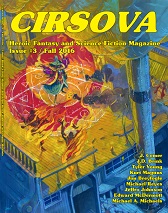 “War in a Way that Suits You” by Michael A. Michaels

“The Lion’s Share” by J.D. Brink
“Blood and Bones: Caribbean 1645” by Jim Breyfogle
“The Mad God’s Scepter” by Edward McDermott
“The End of the Golden Age” by Tyler Young
“Othan, Liberator” by Kurt Magnus
“The Space Witch” by Schuyler Hernstrom
“Clock’s Watch” by Michael Reyes
“The Wooing of Etroklos” by J. Comer

This issue of Cirsova begins with “War in a Way that Suits You” by Michael A. Michaels. It stars Sylt, an elite mercenary, fighting plant on a jungle planet. Sylt leaves a friend who was sorely wounded behind as he fights his way home. Over the course of the battles, he deals with the guilt and his mercenary boss.

This story has a strong sense for the fight scenes and the feeling of an alien world. Sadly, the story falters when it comes to Sylt’s choices. Sylt has flashbacks to, and conversations with, his boss about those choices, but never takes action to either fix or get over them. The last paragraph states that he felt like he’d died, but at no point does he do anything but fight for his life or accept his boss’s orders. It makes the character feel incongruous compared to the more mercenary boss or even the doomed Des.

“The Lion’s Share” by J.D. Brink is a high-spirited space pirate tale. Captain Leonidas Hawksblood raids space ships for their choicest loot by pretending his own ship is listing in space and helpless. The Indigo Coyote comes by, refusing to stop, and the good pirate captain becomes interested..

Leonidas Hawksblood has a fantastically strong voice, and it shows as the main pirate crew are all well rendered. The fight scenes are solid and quick moving. There is a strong feeling that the pirate tales that one might have read as a child set on Earth are faithfully replicated in spirit here. This is one of my favorite stories in this issue.

“Blood and Bones: Caribbean 1645” by Jim Breyfogle begins with a dead pirate as magician John Brennan seeks the dread pirate captain Bones for a mission that would earn a hearty share of booty for all.

Keeping with the ‘High Seas’ theme, this story is a romp as pirate magicians fight a royal magician from the deck of a booty-laden Spanish galleon. The confrontation with the enemy sorcerer is bracing and you have the feeling you are almost there yourself.

“The Mad God’s Scepter” by Edward McDermott has mercenary captain Brant accepting a mission to transport a merchant’s daughter to her arranged husband. On the way, they are forced to put into port at an island not shown on their charts.

This is a great mix of ocean-going hijinks and Cthulhu-esque horror that really makes the world feel bigger than our puny mortal minds can comprehend. The mad god is suitably mad and the action scenes give a great sense of scale to the many–tentacled beastie. There’s also a strong message of loyalty and duty which gives the story a strong finish.

“The End of the Golden Age” by Tyler Young is told from the perspective of Fenton, who inherits pirate captain Gentleman Jim’s parrot, Jolo. Fenton must escape the mad Captain Nate, with his evil parrot, Dillet!

Fenton has a decent knack for storytelling, but launches into the story without giving the reader a good enough description of any character, instead relying on our ingrained images of pirates. This does not harm the story over much, as the action is well done, and the story itself has enough twists to be interesting. Sadly, the climax was a little sudden, and the fight with Captain Nate that had been building up ended quickly. The fact that the story twisted from high seas fantasy to something very real at the end was a good choice on the author’s part.

“Othan, Liberator” by Kurt Magnus abandons the maritime setting for something more like a Robert E. Howard story. Othan is left in a pit to die with the last priest of the local god. However, cultists most foul have captured the city, and have plans to sacrifice much blood to a terrible demon.

The priest character arc carries the story a bit more than it should have. The action before the passable climax did not rise enough to meet the horror of the ending.

In “The Space Witch” by Schuyler Hernstrom, only Attalse stands between the Space Witch and her domination of the Black Pyramid.

Now this is a bill of fare I appreciate! While far too short to make a proper meal of, this story reminds me of one of my favorite stories, William Hope Hodgson’s The Night Land. The alien science fiction atmosphere and the sense that the Space Witch is evil and the Black Pyramid is good is strong and does much for the story. The characters were well developed even from what little we see of them and the ending was well written for this kind of tale.

“Clock’s Watch” by Michael Reyes is set in New York City’s Coney Island as a mysterious, ancient being possesses a young mother and uses her in a scheme to do our world much mischief. Clock sees all of this, but does nothing until he is forced to act by the evil the being wishes to unleash.

This story has a strong air of dark fantasy about it, but doesn’t click somehow. The character of Clock is some sort of invisible being, once human, but we don’t have a good sense of Clock the personality. The same with Jimmy, the mother’s son, or the spirit that possessed the mother; they don’t have much this reader could latch on to. There is a lot of agency and rules surrounding the characters, but nothing the reader can pick apart easily and apply to other elements within the story.

When the magician Etroklos decides it’s time to find a bride, he sends Sirat to find one in “The Wooing of Etroklos” by J. Comer. While questing, Sirat and her guards are captured by bandits and must escape to complete their mission.

I had a hard time with this story. Sirat is not likeable as a main character, nor does she really shine as an active driver of the plot compared to the circus that helps she and her guards escape. The fights are well described and visceral, but lack flair compared to the other stories in this issue. Lastly, the ending was weak, and the choices that Sirat made did not jive for this reader for any number of reasons (mostly related to inheritance law and personal feelings related to it).

Cirsova brings another strong handful of stories to the action-oriented world of science fiction and fantasy. I am definitely going to check out other works from Schuyler Hernstrom, Edward McDermott, and J. D. Brink for their outstanding contributions to this issue. Overall, this issue was well worth the price yet again.