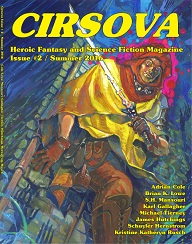 “The Sealed City” by Adrian Cole

The second issue of Cirsova has five short stories and one novella.

In “The Sealed City” by Adrian Cole, tribesmen send out for an agent from their central government to investigate mysterious deaths. Arrul Vorruum answers them, and goes on an adventure to stop a local cult from summoning a being from beyond our dimension. Swords and sorcery are very much present in this tale.

This short story is exciting and quite enjoyable. A feeling for the good old days of the pulps pervades it. This reviewer is a big fan of “Post-Collapse” stories, where civilization has regressed to a near Dark Age, though with still some “tech” remnants of the Lost Age still surviving, and which are often taken to be of a magical nature. This story plays with this sub-genre to the hilt (if such a sub-genre is expansive enough to embrace it), and weaves it well with the action scenes, invisible spectres, and colorful settings.

“Hoskin’s War” by Brian K. Lowe is set during the American Revolution from the perspective of Matthew Hoskins, Revolutionary. Indians, assisted by shadowy spirit dogs, raid a caravan and capture a settler woman. John Lampe joins with Hoskins to pursue the Iroquois braves, revealing that there is a shaman who can summon the spirit dogs, and that they plan on sacrificing her to guarantee them victory. Together, they track down the braves to rescue the woman and stop the shaman once and for all.

This is another great piece for Cirsova. The pacing is good, with brisk movement from scene to scene, from the woods of the frontier to the ancient cave city to the climax. The tension when the characters enter the city and the various magical elements of the spirit dogs carry the story to a satisfactory ending.

We change from Indian braves to dragons in “Squire Errant” by James Hutchings. This story is set in a medieval period with the heroic Sir Yves and his squire, Hal. After Sir Yves dies trying to slay the dragon, Hal gathers together the villagers to defend the village against the rampaging dragon.

This is the most sedate story of the issue, but by no means is it boring. Many times, the ‘train the villagers’ story ends up relying on David vs. Goliath to carry the readers’ feelings, but this story follows an internal rule structure, with clear goals that don’t seem to be just slaying the author’s political enemies. While overall violence is relatively slim, the dragon fighting scenes are worth the price of admission.

“The Water Walks Tonight” by S. H. Mansouri is much more violent. On a stormy day, six vikings visit an island inhabited by Draugr to face their sins. Five of those men are fated to die for their sins, namely greed and rapine. They are met by the Draugr, and start dying, one by one.

This story is the most viscerally violent of the sword and sorcery tales in this issue, but it is also quite contemplative. In between Draugr fights, the vikings talk about their lives and potential evil deeds. It is interesting to see that such violent men have strong codes of honor, and that they determine right and wrong among themselves. I found that much of the focus, when determining what sins each man would die for, was for betrayal or greed. I would not be shocked to see this story, zombie vikings and all, in the Sci Phi Journal or other similar publication.

“Shark Fighter” by Michael Tierney is the last of the short stories and, much like the rest of the stories here, does not disappoint. A shark diver is stranded, and is in great danger of being eaten by a tiger shark. It is revealed that the native guide, Old Caribe, has decided to sacrifice the diver in revenge for allowing a shark to eat his turtle god.

This is a very tightly written story. The plot moves forward quickly, while the tiger shark and ideas about old gods float around the diver, and the reader. The vengeance of Old Caribe is visceral, and the shark never loses a sense of menace, even during flashbacks.

In “Image of the Goddess,” by Schuyler Hernstrom, Plom travels from his home in the monastery of the Goddess to find sacred scriptures in a far off and dangerous jungle. He saves Drur, the wizard and fencer, bearer of the Blue Orb and with the help of the nomad warrioress Sihma. On their way to find the sacred scriptures they have adventures with slavers in the city of Shkan, brave the jungles of Ikzak, fight the insectoid four-armed bounty hunter Wim Tid, and escape the zombified, time-displaced guardians of the scriptures of the Goddess.

This is an excellent end to the second issue of Cirsova. This novella is imaginative and quite in keeping with the ‘Sword and Sorcery’ motif. It helps that Drur, one of the main characters, is a fencing wizard. The characters are likeable, the barbarian character feels like a barbarian, and the constant mockery and subversion of Plom’s youthful ignorance of the real world lightens the mood considerably.

This issue of Cirsova has been excellent. At no point did I feel like I wanted to skip ahead to the next story or that I was bored. Every new story was a delight to the eyes and the imagination. I hope that Cirsova continues, as I want to read much more!