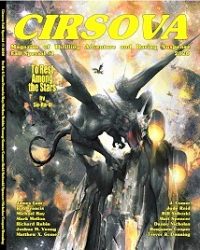 “Melkart the Castaway” by Mark Mellon

“Its Own Reward” by Rob Francis

“The Chamber of Worms” by Matthew X. Gomez

“After the House of the Laughing God” by Michael Ray

“The Way He Should Go” by Joshua M. Young

“Tilting the Wick” by J. Comer

“Slave or Die” by Benjamin Cooper

“He Who Rides on the Clouds” by Trevor R. Denning

“To Rest Among the Stars” by Su-Ra-U

“Not Any Earthly Shade of Color” by Danny Nicholas

“In the Bowels of the Theater” by Matt Spencer

“An Accumulation of Anguish” by James Lam

“The Horror of the Hills” by Jude Reid

Set in a fantastic version of the ancient world, “Melkart the Castaway” by Mark Mellon begins with the title character shipwrecked on an island ruled by a wicked sorcerer. The protagonist must battle Spartan warriors, a Minotaur, and a bronze automaton in order to defeat the tyrant and free his slaves.

Reading this story is like watching one of the many sword-and-sandal movies of the 1960s. Like those enjoyably campy films, the plot is episodic. The muscular hero overcomes his many foes with seeming ease. It is best enjoyed as light entertainment, with Good and Evil presented in simple terms.

In “Its Own Reward” by Rob Francis, two mercenaries set out to recover a valuable promissory note for the aristocrat who hired them. Finding it on the body of a man slain by bandits, they decide to keep it for themselves, and claim it in the name of the dead man. The arrival of an old acquaintance, who might be either friend or foe, leads to complications.

The most enjoyable aspect of this story is a touch of dry wit. The financial aspects of the plot, involving banking, tax evasion, and the like, seem incongruously modern, in a tale that takes place in a typical sword-and-sorcery setting.

“The White Giant’s Map” by Richard Rubin mixes science fiction and fantasy in equal amounts. The human protagonist, marooned on an alien world, accepts a treasure map from a dying enemy. His quest leads to an encounter with black magic.

This violent science fantasy adventure is reminiscent of the planetary tales of Edgar Rice Burroughs. Even if one allows for the blending of two disparate genres, it’s hard to believe that battles can be fought with both blasters and broadswords.

In “The Chamber of Worms” by Matthew X. Gomez, an alchemist and a warrior enter an abandoned mansion in search of an antique sword belonging to the family of the nobleman who hired them. A trapdoor leads to the treasure, but also a battle with monsters and a portal to another world. They emerge from this deadly place, only to face new dangers.

The plot combines fantasy with supernatural horror, creating an effectively eerie mood. The alchemist has magical potions able to deal with almost any situation, lessening the suspense.

The narrator of “After the House of the Laughing God” by Michael Ray rescues a young woman from cultists, only to deliver her into the hands of a duchess who has her own plans for her. The narrator receives an anonymous message, hiring him to free the woman again. She proves to be far more than just an ordinary human being.

The story’s complex background, full of weird creatures and bizarre gods, creates an exotic mood. The narrator’s sword, which communicates with him telepathically, is a more interesting character than its master.

“The Way He Should Go” by Joshua M. Young seems to take place in the extreme far future, although otherwise the story is pure fantasy. The protagonist frees a young boy, hardly more than an infant, from an ancient suspended animation chamber. Poisoned by the bite of a venomous serpent, he is rescued by desert nomads. The leader intends to keep the boy for himself. The protagonist uses his magic to defeat the leader and adopt the child as his son.

The main character’s desire to protect the boy adds more emotional appeal to the story than is usually found in similar tales. Otherwise, this is a typical fantasy adventure.

In “Tilting the Wick” by J. Comer, a pair of travelers come across an isolated community that produces an unfamiliar substance used in unusually bright lamps. They discover the secret of the stuff, which has serious implications for the rest of the world.

It is obvious from the start that the mysterious substance is an oil derived from vegetable matter. Much of the story deals with the technology used to produce the oil. Although this is an unusual and interesting aspect of a fantasy tale, the plot lacks drama, and ends in an anticlimactic fashion.

“Slave or Die” by Benjamin Cooper features a man sentenced to hard labor on a prison planet. An unexplained loss of memory prevents him from remembering why he was sent there. While working brutally hard at the menial task required to keep him supplied with the bare necessities of life, he plots a way to free himself from the seemingly escape-proof planet.

The author effectively conveys the boredom and desperation of the protagonist. The reader may be able to predict the reason for his amnesia, and the explanation for his presence on the planet.

“He Who Rides on Clouds” by Trevor R. Denning is a hardboiled detective story of the future. The narrator, with the aid of his estranged wife, investigates a series of kidnappings of young children. Their quest leads them to a human sacrifice cult on Saturn.

The fact that one of the intended victims is the narrator’s own child, whose existence is unknown to him until he reunites with his wife, adds tension to the plot. The fact that some portions of Saturn have been transformed into Earth-like environments, while others remain in their original state, is difficult to accept as scientifically possible.

In “To Rest Among the Stars” by Su-Ra-U, the crews of starships hunt dragons that dwell in the ether, in order to obtain their blood, which allows for faster-than-light travel. The unexpected presence of an unusually large and powerful dragon leads to a violent battle, with many losses.

The plot inevitably reminds the reader of Cordwainer Smith’s classic story “The Game of Rat and Dragon,” not to the advantage of the newer work. The ending is poignant, but inconclusive.

“Ecliptical Musings” by Bill Suboksi is something of an anomaly in a magazine mostly dedicated to traditional adventure stories with futuristic or imaginary backgrounds. At first, it seems to be mainstream fiction. A man rescues a woman from a gang of attackers, taking her into his home and serving as her mentor. Other plot elements involve an unusual planned community designed by the man, and a friend who is being treated for cancer. These disparate threads come together when the man’s true identity is revealed.

The fantastic aspect of the story is truly unexpected, and completely alters the reader’s perception of what has come before. Written with the grace and skill of literary fiction, this unusual tale is a compelling work of the imagination.

In “Not Any Earthly Shade of Color” by Danny Nicholas, a man sees five points of light in front of his eyes at all times. The bizarre phenomenon renders him unable to work, or to function normally in many other ways. A visitor provides an explanation and a cure, but one that comes with its own problems.

The premise is offbeat and intriguing. The mood of the story is one of black comedy. The joke ending turns the whole thing into a shaggy dog story.

“In the Bowels of the Theater” by Matt Spencer, like many stories in this issue, involves a pair of adventurers. They delve deep beneath a theater, to find an entire underground world. The mismatched pair have varying goals from the start of their journey, and face very different fates.

The theatrical setting of this bloody fantasy adventure is unique, and provides some interesting connections between stagecraft and magic. In other ways, the story is an ordinary example of the genre.

Only one page long, “An Accumulation of Anguish” by James Lam features a trick-or-treater dressed as Frankenstein’s creation who encounters a real monster, with unexpected results. This brief work would serve as a good tale to tell around the campfire on a dark night.

“The Horror of the Hills” by Jude Reid takes place in Scotland in the late Nineteenth Century. Two women, experienced mountain climbers, hope to be the first to scale an unconquered peak. One of them takes off for the slope with a man she meets at an inn, leaving the other behind with the man’s companion. The latter pair set off behind the first two, leading to a gruesome discovery and a supernatural encounter.

The author provides a convincing portrait of the time and place, as well as a realistic description of the process of mountain climbing. The story is not only an effective work of horror fiction, but a thoughtful account of a difficult decision and the resulting guilt.

Victoria Silverwolf has seen quite a few old sword-and-sandal movies.