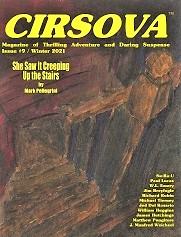 “For We Are Many” by Paul Lucas

“The Wreck of the Cassada” by Jim Breyfogle

“She Saw it Creeping Up the Stairs” by Mark Pellegrini

“To the Sound of a Silent Harp” by William Huggins
“Queen of the House” by J. Manfred Weichsel

A trio of novelettes and a septet of short stories appear in this issue.

The narrator of “For We Are Many” by Paul Lucas travels from one parallel universe to another, eliminating the evil versions of himself, in an effort to purify the single soul that they all share. At the same time, he is pursued by unknown enemies, leading to a final revelation about his own nature.

This is a very simplistic description of a novelette with an unusual, multilayered premise. The author combines science fiction with theological fantasy into a unique work. How one reacts to the spiritual evolution of a deeply flawed protagonist may depend on one’s own religious beliefs, but the tale should intrigue most readers with its speculations. Those who prefer to read fast-moving stories with plenty of action should also be pleased.

In “The Wreck of the Cassada” by Jim Breyfogle, two adventurers are hired to obtain the keel plate of a wrecked ship, giving legal possession of its riches to their employer. They face battles to the death with rivals for ownership of the wealth, attacks by sharks, and even a magical submarine.

The swashbuckling pair have appeared in many stories by the author, and this tale is a typical sword-and-sorcery adventure. The shipboard and underwater settings add a touch of originality to an otherwise familiar plot. Fans of the genre should find it an enjoyable example of the form.

The narrator of “Wychyrst Tower” by Matthew Pungitore discovers an ancient horror in a Central American jungle, along with a clue linking it to the ancestor of an acquittance. Back in the United States, he battles supernatural beings and uncovers an ancient curse.

The author is fond of characters with unusual names, such as Dulf Abbandonato and Ealhswitha Segreti. Although the story is set in modern times, the narrator speaks in an affected, archaic fashion. I found both of these eccentricities distracting. The ending throws everything but the kitchen sink into an overwhelming mixture of supernatural elements.

The main character in the horror novelette “She Saw It Creeping Up the Stairs” by Mark Pellegrini is a little girl living with her mother, who was abandoned by her husband, and her elderly, sickly grandmother. The child hears something moving inside the ancestral home, and eventually encounters a terrifying being.

The author writes convincingly from the point of view of a very young protagonist, and creates a great deal of suspense during the climactic scene. The story builds slowly, and is perhaps a bit too long for its own good. The reader knows that the monster is going to show up sooner or later, and may grow impatient. Some may find the resolution disappointing, or even confusing.

The protagonist of “Fail Early, Fail Well” by W.L. Emery makes a good living by quickly ending enterprises that are doomed to be costly disasters, thus saving his clients a great deal of money. He is hired to stop the expensive process of studying a planet that appears to be ripe for colonization, but which seems to have sentient inhabitants. The investigation reveals an unexpected scheme.

The premise of a professional creator of failures is intriguing, and the clever, cynical character is enjoyable. Despite being set in a universe of easy travel between star systems and multiple aliens, the ending involves a bit of popular culture from the modern world. The last scene brings the story even deeper into mundane reality, which is a disappointment. It transforms an interesting plot into a trivial joke.

The title of “Thorwynn Stapledon and ‘The Mellifluous Phoenix'” by a writer hiding under the strange pseudonym Su-Ra-U refers to a science fiction fan and the name of an anthology edited by him, incomplete after many decades. (The reader may be reminded of the infamous delay of Harlan Ellison’s long-promised anthology The Last Dangerous Visions. If this is a deliberate allusion, it does not appear to be relevant to the plot. Nor does the resemblance of the character’s last name to that of the philosopher and science fiction pioneer Olaf Stapledon appear to be anything more than an in-joke, if it is intentional at all.)

The book consists of works written by authors under the influence of a hallucinatory drug, and each one is to be inspired by a part of the human brain. The resulting works range from incomprehensible nonsense to scientific articles, with no apparent pattern. The daughter of one of the writers accepts an assignment to complete the work of her deceased father, leading to the revelation of the real intent behind the weird anthology.

As one can tell from this synopsis, this is a bizarre tale, with a climax that is even more outrageous than the rest of the story. It’s certainly something different, even if it’s wildly implausible, and likely to appeal only to those familiar with science fiction fandom.

In “Harmonious Unity Burns” by Jed Del Rosario, a trio of greatly enhanced human mercenaries carry out a mission to rescue an alien from a riot in one section of a gigantic city inhabited by many different species of extraterrestrials. The operation involves violent battles and complex political intrigue.

As with many stories in the magazine, this one moves swiftly, with lots of bloody action. The mercenaries have such incredible abilities that they seem like comic book superheroes. Their powers lessen the suspense, as they easily destroy the opposition. The lack of any sympathetic characters, with all sides in the conflict just trying to seize control over the others, may leave a bad taste in the reader’s mouth.

“Stealing the Alchemist Stone” by Richard Rubin is an example of the combination of fantasy and space opera sometimes known as sword-and-planet fiction. The hero is an Earthman stranded on an exotic world, married to an alien, but very human, enchantress. They steal an object with great magical power, unknowingly releasing a woman from centuries of suspended animation. She damages their vehicle, trapping the woman, and kidnaps the man, seeking to make him her minion in her plan for conquest.

This is the kind of old-fashioned pulp adventure in which the protagonist carries both a sword and a ray gun, and which features both robots and an ancient wizard. The combination demands a great deal of suspension of disbelief on the part of the reader. Those nostalgic for the glory days of Planet Stories and Flash Gordon will best appreciate it.

The novelette “To the Sound of a Silent Harp” by William Huggins brings crime fiction into a futuristic setting. The protagonist works for a drug lord, delivering an instantly addictive substance of alien origin from a supplier to customers. He discovers the reason for his employer’s delay in sending the drug to two clients, leading to a final confrontation with the boss.

This is a serious tale that makes use of genre conventions to explore the psyches of its characters in depth. The ending is a bittersweet one, blending a kind of triumph for the protagonist with tragedy.

“Queen of the House” by J. Manfred Weichsel serves the magazine as a light dessert. In a retro-futuristic setting that resembles The Jetsons, a door-to-door salesman demonstrates a cleaning machine to a housewife. The device uses a black hole to send dirt to another universe. Chaos ensues.

This is a very silly story, which becomes goofier and goofier as it goes on. Those who enjoy wacky, brainless comedy will get a kick out of it.

Victoria Silverwolf has seen every episode of The Jetsons.