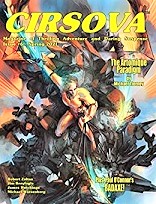 “The Artomique Paradigm” by Michael Tierney (serial, not reviewed)

“The Grain Merchant of Alomar” by Jim Breyfogle

“The Book of Dark Sighs” by Robert Zoltan

In addition to prose, this issue offers a serialized comic strip and a portion of an epic poem. The three complete works of fiction in the magazine consist of two traditional sword-and-sorcery tales, with a work of modern fantasy between them to clear the palate.

In “The Grain Merchant of Alomar” by Jim Breyfogle, two adventurers sneak into the dwelling of a wealthy businessman, making themselves at home without his knowledge. In an ironic touch, he hires them to obtain evidence against a rival, still unaware that they are living in his mansion. Their mission involves black magic and more than one betrayal.

This adventure story contains plenty of exciting action to satisfy fans of derring-do. It is obvious from the start who is going to double-cross the heroes, lessening the suspense. A twist at the end makes up for this to some extent.

The familiar theme of selling one’s soul appears in “Devil’s Deal” by Michael Wiesenberg. A poker player makes a deal with Satan, acquiring the ability to see one minute into the future. Of course, this turns out to be a bad bargain.

The plot is simple, with a predictable resolution. The author displays a great deal of knowledge about poker, but the detailed description of the game slows down what might have been a much shorter story.

We return to magic and swordplay in “The Book of Dark Sighs” by Robert Zoltan. A pair of warriors confront an old enemy who kidnaps the lover of one. She will die unless they journey to another world and retrieve a book of magic. Their involuntary quest takes them to a terrifying realm, and an encounter with a being of immense power.

The hellish nature of the place to which the duo travels gives this the feeling of a grim horror story. In sharp contrast, the adventurers often make joking remarks about their situation, which is not always appropriate. The goddess-like character they meet possesses such enormously strong magic that she dominates the rest of the story, reducing the protagonists to mere witnesses.