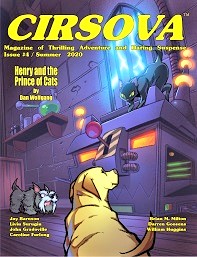 “Battle Beyond the Continuum” by Darren Goossens

“Why Did You Leave Your Last Employer” by Brian M. Milton

“A Judgment of Lestrel” by William Huggins

“Henry and the Prince of Cats” by Dan Wolfgang

The opening novelette in Cirsova #4 is “Battle Beyond the Continuum” by Darren Goossens. All-American, super-genius inventor Rex Funnel transcends early twentieth century technology to produce a transgalactic drive that carries a modified 1930’s aircraft to the Small Magellanic Cloud. He is accompanied by his trusty side-kick, Paul, Paul’s stowaway girlfriend and girlfriend Melony’s lovable lapdog. On reaching their destination they are thrown into a war between the gruesome aliens of the B’nk’jret Republic and the Pithian Empire. The Empire is ruled by the eight foot tall but otherwise improbably attractive Princess Klathray. Our All-American hero, literally as well as figuratively, chooses sides in the war based entirely on appearances!

This reviewer’s first thought was that this story was a reprint from a pre-WW2 pulp SF magazine. But no, it is original. However, the writing is deliberately in the characteristic breathless action style of those early magazines. Hugo Gernsbeck would have recognised and approved every plot element in “Battle Beyond the Continuum” and immediately bought it for any pre-war edition of Amazing Stories. Whether the reader can abandon ninety years of development in SF writing and revel in the artificial nostalgia of this style must be a personal decision.

The second piece is also Space Opera, although written in a more modern style. “Ascension Star” by John Gradoville is set on a far planet in a distant future that combines elements of the American wild-west and rampant capitalism.

The first-person narrator is a freebooting independent space-captain. He rescues/steals a beautiful human slavegirl from an unspeakable fate at the hands of beastly aliens only to discover that his new acquisition/companion is considerably more than she seems.

This is a fast-paced adventure story with a happy, although somewhat contrived ending.

The third offering: “Why Did You Leave Your Last Employer” by Brian M. Milton is set in the present day USA. The hapless narrator is an experienced bee-keeper hired by an archetypal eccentric European Professor to assist him in his bee-breeding programme. Our protagonist becomes slowly aware that his employer is not only eccentric but is as mad as a sack of polecats on amphetamines and that, like all fully-certified mad professors, he has a plan to take over the Earth. Thankfully, the plan is not entirely fool-proof and the Earth is saved.

This whimsical piece is not intended to be taken too seriously but should amuse all but the most ardent supporter of animal rights.

The next story is “A Judgment of Lestrel” by William Huggins. Penne is a rich wastrel, the heir to almost bottomless wealth. His father owns the monopoly on a body regeneration process that offers eternal life to the citizens of a star-spanning civilisation. Instead of taking his place alongside his father, Penne drifts from planet to planet in a benign universe made even safer by the quiet but ever-present protection of his rich and powerful father. For multiple lifetimes he samples strange worlds, alien lovers and mind-altering drugs at his family’s expense. After his heir is thrown off yet another planet, leaving a lover dead of an exotic alien drug overdose, even his patient father reaches the point of despair. He sends Penne to the beautiful but perilous planet Lestrel to face a life or death test of his worthiness.

The fifth tale is “Henry and the Prince of Cats” by Dan Wolfgang.

The place is small-town USA. The time is the near future and every human on the Earth is suddenly dead at the hands of the evil, conniving William, Prince of the Cats. Our narrator is Henry, a loyal and good-natured terrier rendered intelligent by the same manufactured virus that wiped out humanity. Will Henry manage to overthrow the despotic and despicable Prince William to make the world safe for dogkind in this brave new world, or will the evil cats succeed in their takeover? Like Animal Farm, this story explores the relationships that would develop between different species of animals if humanity’s ruling hand should be withdrawn, but it does so with more light-hearted humour and without the political overtones.

Next is “Bad Luck Charm” by Jay Barnson. This is a story of the Occult set in the present day USA. The POV character Larry believes himself to be the luckiest man in the world. After breaking up with his long-term girlfriend he has moved in with Adrienne. She is intelligent and charming, independently wealthy and devoted to him. His work has also improved. His new job is more interesting than before and a promotion is in the offing. All is well, except that he seems more tired, grey hairs have appeared where he used to have none and he has begun to have nightmares. Larry is about to discover the truth of two old adages: “There is no such thing as a free lunch” and “If it is too good to be true then it is probably false”.

The seventh story is “Death’s Shadow” by Caroline Furlong. The narrator is a military veteran who died on active service but has been sent back from beyond death to act as a vigilante. This female author paints a disturbing vision of the present-day USA where violent rape and murder lurk around every corner and where women must either go armed or be helpless victims. Our protagonist at least has the decency not to relish his role, but he has no choice but to respond when repeatedly forced into the choice between intervening or knowing that innocents will die if he does not act.

The final offering is “The Meeting” by Liviu Surugiu (translated by Raluca Basala). The very opposite of Cirsova’s usual fare, “The Meeting” is a deep and slow-paced psychological drama with a dark turn. The translation has been performed sympathetically, retaining the gloomy Slavic feel of the piece.

The location is an asylum in an eastern-European country in the recent past. The narrator(s) Gena and Andrei can only communicate with each other via diary entries that cover a six month period in the late 1960s. The dark reason why they can never meet is revealed slowly as they develop a doomed love affair through their correspondence. Do not expect to come away from this story uplifted by a happy ending—the conclusion is as dark as a Russian Winter.