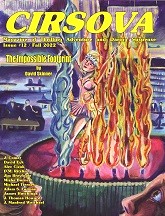 “The Impossible Footprint” by David Skinner

“A Long Way to Fall” by David Eyk

“Fight of the Sandfishers” by Jim Breyfogle

“The Wisdom of Man” by Adam S. Furman

“Fall of a Storm King” by Misha Burnett

“The Strickland Line” by Alec Cizak

The 12th issue of Cirsova has eight original short stories, including a novella and novelette.

“The Impossible Footprint” by David Skinner

Dylal O’Lal is a living legend in this SF novella set in a future where humankind has expanded throughout the solar system. Dylal O’Lal has made himself famous by placing his footprint in the most unlikely places. And now he wishes to set foot in the most impossible of locations, the surface of the Sun.

Dylal’s friends discover a young woman who is impervious to the element fire, simply because she wills it so. And maybe it’s also because she is still a virgin. The group sets off for low-orbit around the sun to see if she can help Dylal in his quest. They must first find some sunfire for their experiments. Sunfire is the fifth element after air, fire, water, and earth.

As they prepare to take a sample of the Sun’s sunfire, they encounter a group of guardians. These creatures should only exist in myths but are now determined to prevent the contamination of the Sun.

The prose was too long for the story it told, making it slow in places, though the pace picked up in the last quarter.

“A Long Way to Fall” by David Eyk

The Akka lieutenant is dead in this murder-mystery SF novelette. The Akka’s commanding officer engages Ras to find out who broke every bone in the Akka soldier’s body. The Akkas have taken over Vulk, a cylindrical colony spinning in space, and the local Vulks aren’t happy. This means Ras can choose from a long list of potential perpetrators. And working for the Akka’s makes him a target of the Vulks’ ire.

It isn’t long before Ras finds himself targeted by a secret cabal on Vulk as he blusters his way through the investigation. Since he was a recent visitor to Vulk, he expects no help and very little respect. Still, he finds a local prostitute is a witness and presses her for information. But when he discovers she’s a cabal member, it’s too late to avoid becoming their next victim.

This story was a light and entertaining whodunnit with a humorous style to the prose.

“Fight of the Sandfishers” by Jim Breyfogle

Mangos crosses a desert with a small caravan in this short speculative story. He heads for Hafiz, a town famous for fishing from a local lake. The fishermen are called Sandfishers, and past kings filled their guard positions from their ranks. Celzez, the Caravan’s sentinel, is returning home to denounce one of those Sandfishers who betrayed the king and allowed the enemy to slaughter the royal family two years past.

Mangos tags along, hoping to dissuade Celzez from the denouncement that will probably result in Celzez’s death. But nothing Mangos does changes Celzez’s mind. Instead, Mangos comes to learn the depth of honor associated with the Sandfishers. When the time comes, can he remain neutral?

The story’s complex plot was nicely crafted and easy to read.

“The Wisdom of Man” by Adam S. Furman

John Knox is a dealer of justice in this short SF/fantasy. When he finds a woman dying from a tachyon experiment, he promises her he’ll avenge her death. It leads him on a chase across time to Sulieman, a mad scientist trying to freeze time.

What follows is a knock-down drag-out battle involving demons, ivory-handled revolvers, and a bowie knife.

The story was a throwback to those action-packed capers from graphic novels.

“Fall of a Storm King” by Misha Burnett

The storm kings are altered to accelerate their metabolism and awareness four-fold in this short SF story. After an accident mining Saturn’s rings, Luther’s storm king license is revoked. Now he returns home to Mars, but no one can change him back to live in normal time.

Still, he finds a job flying tourists around the Martian sights. And for the more daring, he pulls a few stunts in the deepest canyon in the solar system. Then, one day, he takes the son of a leading politician for a joy ride, and this kid wants to get the full experience of crazy flying.

This story started as a character study and ended as an action-based space opera. It was a good read.

This short SF story takes place on Aldous, a planet with a hallucinogenic atmosphere. Authorities send police officer Peter Donavan there to find a murderer. But he quickly loses track of why he’s there when locals force him to breathe the air.

He wanders across the land for some time, asking questions and becoming more disoriented. It isn’t long before he hallucinates bizarre ideas and even facts about himself. Can he find something to ground himself once again?

The story seemed overly simplistic, with an ending that was as unfulfilling as any drug trip.

“Cerulean” is a short fantasy that follows Roger’s trip back in time after drinking an intoxicant. Now he finds himself in a past where seas once more cover most of the world.

He has herculean strength that helps him when pirates capture him. The pirate captain offers him his life if he can seize the treasure on the Wailing Ship. Roger has little choice, but on this strange ship, he finds monsters and a horn that is the source of the wailing sound. Now, if only he can kill the monsters.

The story was poorly structured, and the opening was confusing. Overall, it needed another round of polishing.

“The Strickland Line” by Alec Cizak

A pompous journalist named Harv is traveling by train south of Chicago in this short fantasy set in 1914. A germaphobe before the word existed, Harv is horrified when he finds a tick on his hand. But washing it away makes it madder and much larger.

The tick returns to attack his leg, forcing Harv to engage the conductor to help expel it into the wintery night. And then the tick returns once more. Now a giant, it sits on the train’s roof, using its pincers to tear a hole to get at Harv.

Though the story’s prose was good, the plot lacked purpose and felt flat.

You can follow Kevin P Hallett’s writing on www.kevinphallett.com. There are links to join his mailing list for a weekly newsletter on the recent release of his debut novel, the Defender of Vosj.