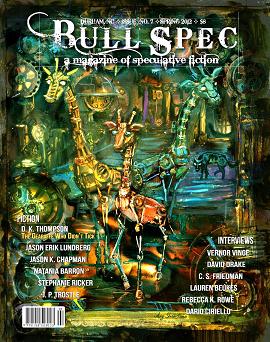 “The Gearaffe Who Didn’t Tick” by D. K. Thompson
“Complications of the Flesh” by Jason Erik Lundberg
“Inseperables’ War” by Stephanie Ricker
“Fish Eyes” by Natania Barron
“Friday Nite at the A&W” by J. P. Trostle
“When Dreams Wake” by Jason K. Chapman

“The Gearaffe Who Didn’t Tick” by D. K. Thompson leads off this issue. It revolves around Annabelle who is very different than the other gearaffes (as the name implies, a group of mechanical giraffelike creatures). Annabelle does not make the same ticking noise as the other gearaffes.. This lack of noise especially bothers her at night when all is silent except for voices that only she hears.

One night her parents decide to take Annabelle to the spaceship ruins the next morning. They plan a day of adventure that will include hanging from the smooth steel hulls using their magnetic hooves, and she can explore the wreck using her high beam lights. It will also be a way for her family and the other gearaffe families to find more oil.

When Annabelle gets to the ruins, she is separated from the others, and has to learn that her own fears can be conquered.  In this case, this means accepting that one is different and rejoice in that differentness. This story was utterly predictable and seemed aimed at children.  Considering the statement in the author bio for D. K. Thompson “that he is very pleased to have finally written a PG story, but not as pleased as his wife and children,” as well as the notation at the beginning that the story is “For Claire,” it seems clear that it was aimed at a very young audience.

Readers are than taken to Southeast Asia in “Complications of the Flesh” by Jason Erik Lundberg.   Moz is one angry drug lord and with good reason: he is fleeing a police raid, and has discovered his girlfriend Savita has been sleeping with Ang Moh. While Moz can’t kill Ang Moh just yet, Moz certainly can put the hurt on him.  He shoots him up with the latest designer drug to see what it does to the user besides causing hallucinations.

The hallucinations are done in a different point of view and may or may not be reality in this interesting story, which also touches upon life, death, rebirth and time travel along the way. The good tale is short and is full of ideas that would be interesting to explore in a longer framework.

Southeast Asia, specifically Vietnam, is also a key part of “Inseparables’ War” by Stephanie Ricker. Bobby and John are twins living in Kentucky in the 60s (or early 70s) with the ability to see what each other is seeing. When Bobby is drafted, John, who has a bad leg and stays home, continues to look out for him.

This is an interesting story that is a good one and quite probably would have been even better in a longer format.  It feels rushed after the initial set up.  More than half the text involves the time before Bobby leaves for basic training and Vietnam.

“Fish Eyes” by Natania Barron follows Brodd, who is fishing illegally because he and his family have no food.   Terrified and full of misgivings, Brodd eventually uses his harpoon to capture and kill a fish that has a human face, machinery inside, and is at least partly meat. The meat sounds good if you don’t think about where it came from.

Like most of the stories in this issue, this one features an ambiguous ending. Some readers will see it as a dark ending bordering on horror while others will see it in a more positive light.

After the game, everyone goes to “Friday Nite at the A&W” to hang out in this very short story by J. P. Trostle. This short piece breaks no new ground as it works the “Happy Days” motif.  It basically takes the old idea of car hops and drive-in restaurants, throws in a few scientific sounding things such as “hover cars” and “jetpacks” with lines such as “your stomach turns to neutronium” and sets it somewhere and sometime in the future.  Cute, but easily forgettable.

The final story is “When Dreams Wake” by Jason K. Chapman. This complicated tale involves Sarah who was abducted to take care of an alien suffering from a fever that causes him to lose mental control.  For this reason, his race has stranded him where he can do no harm.  It’s a beautiful place, but is still a prison, one that Sarah can modify to for own liking if she can manage to keep him alive and dreaming.

This was a very interesting tale and for this reader the best of the six short stories in this issue.  This story and “The Gearaffe Who Didn’t Tick” were the only two stories in the issue that seemed to have as much space as needed to fully explore the story. The other stories all seemed rushed and as a result were not as satisfying as they could have been.

At sixty pages long, this is a very well-done magazine containing numerous interviews with various authors, various features, and plenty of book reviews. It is unfortunate that the short fiction appears to be somewhat of an afterthought.