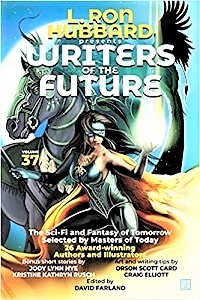 Writers of the Future #37

“The Tiger and the Waif” by John M. Campbell

“The Enfield Report” by Christopher Bowthorpe

“The Dangerous Dimension” by L. Ron Hubbard (reprint, not reviewed)

“How to Steal the Plot Armor” by Luke Wildman

“The Argentum” by Anj Dockrey

“The Skin of My Mother” by Erik Lynd

“Death of a Time Traveler” by Sara Fox

“The Battle of Donasi” by Elaine Midcoh

“The Museum of Modern Warfare” by Kristine Kathryn Rusch (reprint, not reviewed)

“A Demon Hunter’s Guide to Passover Seder” by Ryan Cole

“The Tiger and the Waif” by John M. Campbell makes for an engaging story to kick off the anthology. Sometime in the future, the ‘big one’—a huge earthquake on the US western seaboard—levels cities and leaves many cut off from food, shelter and assistance. A robotic AI kitten ‘wakes’ within the rubble and soon finds a lone young girl it feels compelled to help. The prose here is clean and well-crafted, and albeit a simple tale, it is successfully conveyed.

“Sixers” by Barbara Lund is another tale from a frightening future. War has left much of the land in a state of dystopian dereliction. Within this world live many people who have sixth senses of one form or another—essentially psychic abilities—and such ‘sixers’ are conscripted into the military if they are found. One older woman with a sixth sense helps some youngsters as she travels through this dangerous world toward her estranged son. The reference to sixth sense as ‘magic’, as well as the fantastical nature of the abilities, makes this an interesting science fantasy piece, closer to super-hero fiction than straight SF. Characterisation is good, and the story arc is satisfying.

“The Enfield Report” by Christopher Bowthorpe is an excellent SF concept piece and, as an idea, it wouldn’t have been out of place in a volume of Dangerous Visions. A scientist is forced to assist the torture of an alien for military purposes, raising interesting questions about morality and challenging the reader with very emotive imagery. If the story had concluded before the final section, it would have been great, leaving the plot with an uncertain outcome, and enabling the tale to retain the sense of discomfort generated in the middle section. The author concludes the tale too neatly though, unfortunately reducing the impact of the protagonist’s choices and the overall narrative power. But it’s still not at all bad.

“The Widow’s Might” by Elizabeth Chatsworth is quite a light fantasy in which a tea-shop owner is helped in her resistance against a mob protection racket by a band of witches. The tale is actually quite dark in tone, but despite being perfectly engaging, it rather lacks depth or resonance for the reader. The scenes are nicely rendered, however, and the prose is quite crisp and entertaining.

“How to Steal the Plot Armor” by Luke Wildman is a comedic fantasy tale. Written as a parody, poking fun at fantasy tropes while utilising them, there is more than a whiff of Pratchett’s Discworld to be found here. Genre parodies often work best when the fantasy plot is used as vehicle for a broader underlying idea. In the Discworld books, Pratchett would give his ‘take’ on a different social issue or genre in each book. Here, the underlying message isn’t that obvious, so it reads as a straight fantasy tale, though written in a satirical style. The tale itself isn’t too bad, and the writing is quite good, but the jokes are thin and few and ultimately this story doesn’t offer very much of note.

“The Redemption of Brother Adalam” by K. D. Julicher is an enjoyable and immersive fantasy tale. A monastic order has set aside the violent ‘bear spirits’ with whom each monk co-exists, to lead a life of peace. However, bandit raids on a local village causes one monk to question his vows. The tale is well told, so that even though the ending is foreshadowed well in advance and will be predictable for many readers, it is still an entertaining read.

“The Argentum” by Anj Dockrey is an SF tale that covers well-trodden ground in the genre. On an inhospitable colony world, an artificial intelligence befriends a worker, seeking to understand what it means to be truly human. The story is structurally quite well crafted, but many readers of SF short stories are likely to feel they’ve read much the same story previously. New readers of the genre should find some of the ideas that the author recycles quite interesting, however.

“The Phoenixes’ War” by Jody Lynn Nye—unlike the previous tales showcasing ‘new writers’—is a fantasy story provided by an established writer in response to the cover art of the anthology. Unfortunately, it is not an especially engaging and enjoyable story, rather lacking in interest and written in somewhat clunky prose. Presented mainly in short perfunctory sentences, the story, describing the role of phoenixes in a fantasy war, reads more like a novel synopsis than a short story.

“Soul Paper” by Trent Walters is quite a thoughtful short story and is reasonably well executed. Its fantasy and speculative elements are rather limited, however, so it would not be out of place in a non-genre anthology. A girl visits her grandfather in a mental institution—with warnings that he is crazy—where he discusses the meaning of the soul with her. The underlying message of the story is rather ambiguous, though not perhaps by design.

“The Skin of My Mother” by Erik Lynd is a horror-fantasy tale. With this story, it’s hard to say much about the plotting and scenario without spoiling future readers’ enjoyment. Although, ‘enjoy’ might be the wrong word in this instance, as this is an extremely dark tale. A woman returns to her mother’s house to exact revenge over the loss of her young child to cancer. The horror concept, while incredibly grim, is well conceived and novel and the final twist offers quite a satisfying conclusion.

“Death of a Time Traveler” by Sara Fox explores the paradoxes inherent in time travel, by asking what happens when your time-travelling father becomes sick. Can he die? Stories that present a thought-experiment for the reader can relegate the actual writing to playing second fiddle to the clever idea, but here Fox presents a well-written story and brings her protagonist to life.

“The Battle of Donasi” by Elaine Midcoh is military space opera, reminiscent of the short story fiction from the ‘Golden Age’. After inadvertently triggering a genocidal event on an alien race, a spaceship captain is sent to a relatively unknown world to conduct a survey mission. What she finds there surprises her and her crew, requiring some out of the box thinking. The tale is brightly told and scampers along at a good pace, and the story arc is satisfying, making it an enjoyable read. It’s not perfect though, as the narrative lacks the depth in its complexity and characterisation needed to raise it above average.

“A Demon Hunter’s Guide to Passover Seder” by Ryan Cole recounts an evening with a Jewish family celebrating the seder ritual meal at Passover. Noam, a younger boy, is very devout and firmly believes that the traditional demons of Jewish folklore are not only real but coming to get the family. His worries are compounded by the presence of his older brother’s girlfriend, who lacks belief. Those not familiar with Jewish traditions and mythology will find the story interesting, and the author captures the mindset of the young protagonist rather well.

“Hemingway” by Emma Washburn is told from the perspective of a young girl, and appropriate to this viewpoint, it delivers a story with the innocent imagination of childhood. The girl rows out each day to a house that stands in the sea, to meet with an old man who resides there. The sea is slowly rising to flood the dwelling, and this inevitably limits how long the girl can visit before it is lost. Reading like a fable, the story explores the loss of childhood innocence, and may also lead readers to reflect on the impact of climate change.

“Half-Breed” by Brittany Rainsdon is an engaging novelette that recounts the lives of a settlement of forest dryads and their racial tensions with local humans. A half dryad-half human girl who attends the local high school, where she is racially bullied, is preparing for a ceremony to accept her fully into the dryad community. The tale provides an allegory for the place of indigenous communities in modern societies and explores the challenges that can be faced by those of mixed race. The writing is good, with well-rounded characters and convincing dialogue, and the fantasy elements are engaging, making this a rich and thoughtful tale.

A few words for the anthology as a whole are warranted. Writers of the Future #37 is an enjoyable collection of (mainly) new fiction by writers who, in the main, are still learning their craft. The fantasy, SF and horror genres get a look in, and some of the ideas and imagery here were highly inventive and novel, though unsurprisingly, not every idea was a hit. The quality of the prose was generally high, and the stories were consistently well-crafted, suggesting a bright future for some of these authors. It is notable, however, that while few stories really didn’t appeal (indeed, most were quite enjoyable), equally few were especially strong in both their execution and idea. The anthology is therefore recommended to readers seeking new fiction from interesting new voices, with the proviso that the fiction on offer is exactly that, and not an anthology of works by established authors who have more-fully honed their craft.