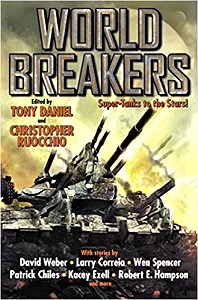 “Red One” by Kevin Ikenberry

“Daughter Of the Mountains” by Kacey Ezell

“Harvester Of Men” by Tony Daniel

“Good Of The Many” by Monalisa Foster

“The Prisoner” by Patrick Chiles

“The Dragonslayers” by Christopher Ruocchio

“World Enough” by Robert E. Hampson is a story about a horribly wounded soldier given a chance to serve one more time. The writer approaches the idea of a sentient tank from the idea of a human/computer interface reminiscent of the brain ships of Anne McCaffrey. The story is a far more detailed take on the idea because the author has at least one PhD and his day job is brain research. That said, Hampson doesn’t fall into the lecture trap that a lot of good scientist authors fall into. He gives you just enough science to tell the tale and no more.

“A Tank Named Bob” is an odd but satisfying mix of gallows humor, pathos, and heroism in which Larry Correia examines what drives humans to push on against hopeless odds. The main character is being manipulated and lied to at every turn till he turns the tables and takes another direction. Of course, you can drive a lot further and harder when what’s left of your body is installed in a super tank.

Losing comrades in the heat of battle can have profound effects on survivors. Kevin Ikenberry postulates in “Red One” how that might not only push a computerized tank into sentience but to honor its fallen crew’s last orders.

Only Kacey Ezell could weave a strong and canny princess into a story about an intelligent tank. “Daughter of the Mountains” is the chronicle of the growth of an astute thirteen old from precocious princess to assured ruler of her realm and the eight-hundred-and-fifty-year-old sentient tank that aids her and her people to reclaim the heritage lost in a long-ago nuclear war.

“Tanknological Superiority” by Hank Davis may be one of the funniest stories I’ve come across in some time. It takes the alien invasion trope and views it through the eyes of a teenager. A curious, super smart teenager that is an artificial intelligence. Living in the body of an advanced tank.

The author does a deft job of conveying the teenage reaction to events (what’s the most I can say without getting in trouble?) along with the interactions of his scientist “parents” (who are along for the ride and think they are in charge) to life-threatening peril.

“Harvester Of Men” by Tony Daniel is a departure from the other stories in that the sentient vehicle is in fact a dying alien infiltrator that has gone native and takes a pickup truck over, right down to a Texas accent. The story has you wondering at several points exactly who the bad guys are, which might throw some readers, but it all resolves in the end.

Everyone has heard horror stories about meeting and forming a romantic relationship online. “Amarillo By Fire Fight” by Keith Hedger starts with this premise, tosses in new love and a self-aware tank and turns on the blender to make a tasty and humorous story.

What happens when the core programing, the memories of a sentient tank are scrambled and it can’t recall its purpose? In “Anvil,” Wen Spencer writes that the tank with the same name as the title will figure out something to do. Chickens are involved. Lots and lots of chickens.

“Good Of The Many” by Monalisa Foster is another story that doesn’t actually involve tanks. In fact, almost all the story takes place on a disabled ship marooned on a remote planet. Ms. Foster explores the idea that self-aware artificial intelligence can grow to become too human, magnifying not only human virtues but failures as well.

Riffing on the Skynet theme of the Terminator franchise, Patrick Chiles delves into the mindset of the machine enemy in “The Prisoner.” The story examines why AIs might well turn against humanity along with how to turn them away from destruction.

“The Dragonslayers” by Christopher Ruocchio is unlike any of the other stories. The “tank” is really more of a mech warrior cyborg than the sentient tanks or vehicles in the other stories and wasn’t really a character per se, but more of an obstacle to be overcome. It’s not a terrible story but doesn’t follow the overarching theme of the anthology and is a little jarring to read.

“Humanity’s Fist” by Lou J Berger uses a premise favored by several authors in the anthology, the idea of a self-aware battle tank waking up long after the war it fought had ended. Unlike the other tales, Professor is a tank who not only has no desire to go on but is ready to end himself and join his comrades in death. Until a human museum curator offers him paradise.

“Dyma Fi’n Sefyll” by David Weber is without a doubt the best story of the anthology. It is a story about a battle between honor and betrayal. The tale is even more poignant in that corrupt leaders lie to loyal soldiers in order to destroy their own ruler and all that stands against the evil is a good tank that refuses to do nothing.

This may be the finest MilSF short story I have ever read in the fifty-seven years I have been reading science fiction. It alone is worth the price of the book.