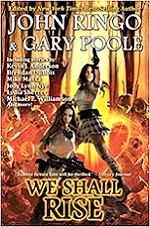 “Fire in the Sky” by Michael Z. Williamson & Stephanie Osborn

“Chase the Sunset” by Jamie Ibson

“Descent into the Underworld” by Brian Trent

“A Thing or Two” by Kacey Ezell

“The Best Part of Waking Up” by Mike Massa

“Social Distance” by Kevin J. Anderson & Rebecca Moesta is very different from the other stories in the collection in that it starts shortly before the Fall (the rise of the infected zombies) and serves as a primer for readers not familiar with the Black Tide Rising universe. It chronicles the early days of the virus through the eyes of a group of affluent teenagers sent or dumped in some cases by their parents onto a multi week-wilderness adventure. The isolation both saves them from infection and keeps them in the dark about their world dying. An excellent coming of age story.

“Liberation Day” by Brendan DuBois continues the tale of the residents of Massabesic Island, Maine in the second Black Tide Rising anthology, Voices of the Fall. In it he creates a typical down eastern response to the prospect of exchanging their homes and precarious existence for the prospect of being refugees.

“Appalachia Rex” by Jason Cordova is both the funniest and in some ways most poignant story in this collection. Told from the point of view of the valedictorian of St. Dominic’s Preparatory School for Girls (although she is quick to point out that was because she had to shoot the five girls ahead of her after they went zombie) and rode out the worst of the zombie apocalypse under the leadership of Sister Ann, a USMC vet who took the veil. I am going on record as saying that this story of Catholic schoolgirls with AR-15s and shotguns in rural Virginia begs to be a standalone novel.

“Maligator Country” by Lydia Sherrer recounts the story of a farming community and how it survived the Fall. It dives deep into a theme that a lot of other writers in the BTR universe tend to skirt, the effects of having to kill your loved ones, especially a spouse who becomes infected. The author does an excellent job conveying the turmoil and withdrawal along with some four footed redemption.

Next is “Fire in the Sky” by Michael Z. Williamson & Stephanie Osborn. At first, I was a little disappointed that Michael Z Williamson didn’t give us another tale of the King of Florcubatamp. However, the joint effort of two of my favorite authors not only conveys the spirit of “light a candle ” to illuminate the rise of humanity in a very literal sense, but is a fun read. Oh, and it turns out that a certain self-proclaimed royal likes rockets.

Several authors have submissions in all three of the BTR anthologies to date. Jody Lynn Nye is the only one to continue the storyline begun in Black Tide Rising. “Just Like Home” is a continuation of the stories of the people based at the Nashville area Foresight Genetics first featured in “Staying Human,” from the Black Tide Rising anthology, and continued in the Voices of the Fall story “Ham Sandwich.” This outing revisits characters from the previous two stories providing a bit of closure for some while leaving the door open for another story in the future. Fans of HGTV will get a kick out of the challenges of Reno during a zombie apocalypse. Like “Appalachia Rex,” I hope the author can be persuaded to incorporate this into a standalone novel.

“Chase the Sunset” by Jamie Ibson describes the zombie apocalypse in the great white north through the eyes of a team of Canadian soldiers who are faced with a rogue exploiting civilians. Very well done.

“Descent into the Underworld” by Brian Trent takes the reader to Italy with a story about a family man who happens to be a former contract killer using his skillset to protect his community and find his kidnapped daughter.

“A Thing or Two” by Kacey Ezell is a heartwarming tale of a young man’s education during the zombie apocalypse; respecting your mama, learning to drive, doing the right thing when trading for moonshine, the effects of punji sticks on your enemies…

A great story and proof that the author has great taste in music.

“Ex Fide Absurdo” by Christopher L. Smith & Brent Roeder catches us up on the main characters we first met in “200 Miles to Huntsville” by Christopher Smith in the first Black Tide Rising anthology. Mr. Smith is joined this time around by Brent Roeder, the nom de plume used by Doctor Evil Penguin when interacting with the mammals.

The unlikely duo of a convict and a correctional officer find themselves in the role of Texas census takers who find themselves on a mission from God. The story captures the sense of hope and humor in the face of horrific tragedy that sets the BTR universe apart from most apocalyptic stories.

Mike Massa is not only another three time anthology contributor but has written stand alone novels in the Black Time Rising universe. “The Best Part of Waking Up” revisits characters from his River of Darkness novel.

One of the hallmarks of the BTR universe, referring to passengers locked in shipboard cabins or large storage holds for lengthy periods of time, was, “What happens in the compartment, stays in the compartment, ” meaning that you get a free pass on things that people had to do to survive. Some people have more difficulty—once liberated—with a second chance than others. Fair warning, this is both a gripping story and a dark one.