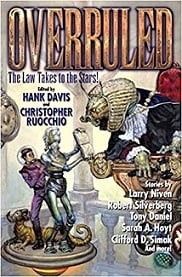 “The Sketcher” by Tom Kidd

“Jerry Was a Man” by Robert A. Heinlein (reprint, not reviewed)

“The Jigsaw Man” by Larry Niven (reprint, not reviewed)

“The Executioner” by Algis Budrys (reprint, not reviewed)

“License to Live” by Sarah A. Hoyt & Laura Montgomery

“The Riot That Wasn’t in Port Neeks” by Susan R. Matthews

“How-2” by Clifford D. Simak (reprint, not reviewed)

“Victim of Changes” by Christopher Ruocchio

“The Cyber and Justice Holmes” by Frank Riley (reprint, not reviewed)

“To See the Invisible Man” by Robert Silverberg (reprint, not reviewed)

“License to Steal” by Louis Newman (reprint, not reviewed)

“With the Knight Male” by Charles Sheffield (reprint, not reviewed)

This anthology contains eighteen science fiction stories themed around the courts of law found throughout the universe. Thirteen of the stories come from past publications and include several legendary authors. A fascinating way to see how different science fiction authors have approached courts of law over the last seventy-plus years. The five new tales include one novelette and four short stories.

“The Sketcher” by Tom Kidd

I-Cixx corporation uses sketchers as interpreters and translators in this SF novelette. And Scribbler is one of the better human sketchers, who’s duped into signing his life away on the far side of the Galaxy.

Now, someone has framed Scribbler for conspiring to murder a dignitary and he faces summary execution. Perri, his robotic lawyer in this conveyor-belt system of injustice isn’t concerned with his innocence, preferring that he sign a confession and have his execution commuted to a century of hard labor. But when Perri sees Scribbler’s sketches, it gets an idea.

The author used humor in the first half that started alright, then became distracting, and finally tedious to slog through. Happily, the plot picked up its pace in the second half.

“License to Live” by Sarah A. Hoyt & Laura Montgomery

In this interesting short SF story, Caleb represents a Martian colony that launched without proper licenses. Now the colony needs supplies and the government is refusing, claiming the colony is in violation of a treaty against unfettered space exploitation.

Caleb’s thirteen-year-old daughter, Maria, is following the nationally televised case. And her schoolteacher is using the case to show that no one is above the law, not even colonists, and certainly not their legal representatives. With the colonist’s lives and the respect of his daughter on the line, can Caleb find the right argument to sway a judge who clearly doesn’t agree with his legal brief?

This intriguing character-driven story was engaging and a pleasure to read. Somehow, the authors have woven a legal story into a page-turner.

“The Riot That Wasn’t in Port Neeks” by Susan R. Matthews

Judge Bat Yorvik finds himself caught between two justified litigants in this SF short. He has little authority in a lawless backwater region of space, where each party usually fights it out to settle their disputes.

While both parties are partially right, both are also wrong to some degree, and Bat knows that a powerful outside party has an interest in the outcome too. Judge Yorvik decides on an unusual, though ancient, approach to finding a resolution.

This was an easy to read story steeped in the mystery of how the Judge would solve this complex problem.

Shane Durant is a monster-fighting lawyer in this unusual short horror story. Training in MMA comes in handy too sometimes. Shane’s boss sends him to help another law firm that’s under threat from its undead former partner.

Shane must use the elevator to reach the law firm’s office on the sixtieth floor. When a foul-smelling man gets on with him and selects the button for floor sixty, the fun starts for Shane.

This was a knock down drag ‘em out story that was pure fun to read.

“Victim of Changes” by Christopher Ruocchio

This SF short is set in a future where the authorities don’t allow people and machines to mingle. Here, they consider cyborgs to be an abomination, worthy of treatment like the witches of yesteryear.

The praetor, Sarana, must sentence Leocadia, a serpentine cyborg, to death. Only this female cyborg has a very human daughter which complicates the entire case.

This was an enjoyable collection of speculative fiction stories dealing with lawyers, courts, and judges. In the collection were several new gems as well as many old golden nuggets. The oldies included Larry Niven’s 1968 story about the hidden judicial consequences of organ transplants; Robert Heinlein’s 1947 story about the rights of a bioengineered ape; Arthur C. Clarke’s 1957 story about hoodwinking the local magistrate by twisting well-known science.

All stories that were ahead of their time including those by newer authors have since been imitated many times.

The overall quality was high.