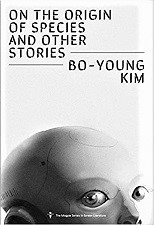 On the Origin of Species

“An Evolutionary Myth” (translated by Jihyun Park and Gord Sellar)

“Last of the Wolves”

“On the Origin of Species”

“On the Origin of Species – And What Might Have Happened Thereafter”

The Traveller goes on a mission of discovery in this SF novelette set in a future dominated by virtual reality games. They place him in an obsolete game with only one human player left. The Traveller must convince that player to leave the game. But the Hunter is set in his ways, and it quickly becomes a battle of wits between the two players.

Soon both players begin to question whether they are human or an NPC (Non-Player Character). How can you determine if a human or a program controls the other avatar? And when another human-like character joins the debate, the Traveller finds himself in a conundrum with no logical solution.

Still, the Traveller’s task is to convince the human players to leave before they shut down the game permanently. But if they aren’t human, is he required to remove them? And, if he, himself, isn’t human, will he cease to exist when they terminate the game?

The author wove a complex story letting the reader do most of their own decision making. An intriguing read though a tad slow at times.

In this SF novelette, the relationship between quantum physics and time travel is explored. In the story, Mrs. Kim struggles with her daughter’s attitude toward school.

All she knows is the need to push her daughter hard to excel and get accepted to a good college. It is how her mother raised her, and it’s how other parents treat their high-school-age children. But the world has changed dramatically. Now the children understand the uncertainty in the universe from quantum theory and how even the most predictable outcomes also have a probability of other outcomes, no matter how small the possibility.

And one such unlikely outcome is traveling backward through time. And those who adhere closely to quantum uncertainty can manipulate those probabilities.

The story’s proposition was intriguing and wrapped up in a story about a mother and her misunderstood teenage daughter. At times these two threads created more confusion than mystery.

“An Evolutionary Myth” (translated by Jihyun Park and Gord Sellar)

The erstwhile crown prince finds himself in harm’s way in this fantasy novelette. His father has abdicated the throne to his uncle, who now plans to decimate the older brother’s family.

The prince flees from his home when the assassins arrive and only wants to find a place to hide. The kingdom itself is in distress as the land undergoes droughts and famines. The people themselves evolve into different forms to better survive. And the prince is no different, undergoing several metamorphoses as the King’s men encounter him.

Given his royalty, could the prince evolve into something more beneficial to his kingdom?

This story was slow. The author dedicated long sections to describing the changes the prince passes through before the story’s conclusion.

“Last of the Wolves”

Kim’s SF novelette is set in a future where humans are the pets of dragons who are the new masters of the Earth. Albi, is just such a pet. She loves her master, though he can never see the art she dedicates to him. So, Albi decides to run away.

She seeks the legendary ‘wolves’ who are unmodified humans. But few feral humans trust her, and she must fight them to learn the right location of the wolves. If the ferals don’t trust her, what chance does Albi have if she were to find a wolf?

“The Last of the Wolves” was an interesting variation on the alien invasion premise and kept the intrigue going until the end.

“On the Origin of Species”

Kay is a model 1029 robot in this SF novella set one hundred millennia in the future. Earth is unrecognizable. A permanent black cloud blocks out the sun, leaving the temperature a uniform sixty below freezing, all organic life is gone, and the atmosphere is devoid of any free oxygen. The planet is now perfect for robotic life, which naturally believes it is the only proper form of life.

The robots can only recreate themselves from the dismantled pieces of other robots, and the models are limited to the last models made by the Gods. Into this static world, Kay proposes a revolutionary idea, that it could be possible for robots to evolve, for new parts to ‘grow’ out of the rocks and earth.

Ridiculed by most ‘learned’ robots, a few take her ideas and develop a new organic biology course at the university. But the world is not conducive to such life. Still, they persist, despite discovering a green growth that causes leprosy in some of the students, including Kay.

The author took the future well past climate change and to the dawn of the next apocalypse. It was a long but exciting tale.

In this short science fiction story, a young lady writes to her brother to assure him she is well. Despite suffering from a strange malady that causes her to lose consciousness periodically for eight hours, she has managed to adjust her life around the bouts of fainting.

She relays a story about a cave with dark periods in which the animals also lose consciousness during the darkness. The story of the cave reminds her of a mysterious message received from across the galaxy. The message said, “Stars shine in Earth’s sky.” She imagined it came from a place where the sky wasn’t always glowing as it does for them.

The author’s prose held this story together and made a simple concept into a mysterious account, an enticing and unexpected read.

“On the Origin of Species – And What Might Have Happened Thereafter”

After creating the idea of organic biology, Kay walks away from the research lab in this SF novella. For thirty years, she has refused even to contact her friends in the lab that is diligently creating new organic life.

Then another robot appeals to her to check out the lab. For the last decade, robots have gone in to investigate, but none have come back out. Kay agrees to risk going in to see how much her friends have accomplished. What she finds explains the mystery; for who alone in the world’s history could command the absolute obedience and loyalty of a robot. Kay is looking at the end of robot civilization unless she can overcome her own compulsions.

The story was a continuation of “The Origin of Species” and was just as interesting.

This was an excellent collection of speculative fiction coming from South Korea. When a prominent author from another country presents her fiction, it is not unusual to find several strong stories.