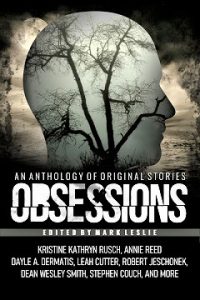 “My Prize” by Leah Cutter (nongenre, not reviewed)

“Curse of the Ghoulmaster” by Stephen Couch (nongenre, not reviewed)

“The Last Julian” by Annie Reed

“A Rare Bird” by Joe Cron

“At the Heart of It All” by Kari Kilgore (nongenre, not reviewed)

“Not Sick Enough in the Head” by Robert Jeschonek

“Bringing Light Into Darkness” by Dayle A. Dermatis

“A Matter for God” by Kristine Kathryn Rusch (nongenre, not reviewed)

“For Love of Ronald Sturgis” by Michael Kingswood (nongenre, not reviewed)

“Everything Got Colder” by Dean Wesley Smith

“The Tooth Fairy” by David Stier

As the title implies, all the stories in this anthology feature characters with some form of single-minded preoccupation. In addition to science fiction, fantasy, and horror, the book also offers mainstream fiction dealing with the same theme, from a man obsessed with a television horror host to a woman obsessed with the assassination of John Fitzgerald Kennedy.

In “The Last Julian” by Annie Reed, a man creates multiple robotic duplicates of his dead son over many years. An act of nature forces him to consider how he has wasted his life trying to recapture the past. This is a simple but effective fable, which touches the reader’s heart while avoiding sentimentality.

“A Rare Bird” by Joe Cron features the last ivory-billed woodpecker on Earth. In the tradition of Felix Salter’s classic novel Bambi: A Life in the Woods, the animals in this story are depicted realistically, except for the fact that they can talk to each other. Alternating sections of narration deal with the woodpecker’s long, arduous flight from Cuba to Arkansas, and a boy with a terminal disease whose hobby is birdwatching. The two characters come together in a bittersweet ending.

The author skillfully manages the difficult task of writing an animal fantasy that is neither anthropocentric nor whimsical. The story’s conclusion is emotionally satisfying without denying the reality of the characters’ plights.

“Not Sick Enough in the Head” by Robert Jeschonek takes place in a future where all forms of addiction, from alcoholism to overspending, are encouraged, in order to stimulate the economy. The narrator undergoes therapy for her lack of obsession. Her mother, the driving force behind this society’s desire to make everyone subject to some kind of compulsion, arrives in a final attempt to make her conform. The narrator has plans of her own.

The satiric premise is interesting, if not entirely plausible. Once the narrator’s mother shows up, however, the plot goes in a different direction, becoming a tale of revenge. The sudden change is jarring, and makes the reader lose all sympathy for the otherwise appealing protagonist.

In “Bringing Light Into Darkness” by Dayle A. Dermatis, a woman uses a time machine to prevent her grandfather from suffering an act of injustice as a young man. The theme of changing the past is a familiar one, with no surprises in the plot. The main appeal of this straightforward tale is the way in which it deals with racism in the Jim Crow era without becoming melodramatic.

The ghost of an actuary haunts an office in “Silver Linings” by Leigh Saunders. The dead man was a chronic worrier, and the presence of his specter casts a gloomy pall over the other employees. After multiple unsuccessful attempts to distract the ghost from his anxious mood, his coworkers make use of him to boost their company’s business.

This is a lighthearted story, with a wry look at the workings of a corporation. A reader is likely to smile at it, without laughing out loud.

“Blood of Heroes” by Ezekiel James Boston takes place in a world full of superheroes and supervillains. The main character, a first responder, has the peculiar hobby of collecting samples of blood from wounded superheroes. A visit from the authorities leads to the discovery of his ex-lover’s secret.

The protagonist’s gruesome collection and what his former girlfriend is hiding have almost nothing to do with each other. The two plot threads are brought together only by coincidence. Although written in a convincing fashion, the story seems disjointed.

“Second-Hand Casket” by Kate Pavelle features a man who inherits his dead aunt’s unused coffin. He places an ad offering to sell it. A vampire, reduced to sleeping in a bathtub in order to avoid any trace of sunlight, shows up, intending to buy it. Their encounter involves some unexpected negotiation.

The tone of the story is very matter-of-fact, without a trace of the macabre. The plot lacks excitement, but the author creates believable characters.

“Everything Got Colder” by Dean Wesley Smith takes place after civilization breaks down from a series of crises. The story’s only character lives alone in an abandoned subdivision. Over time, the last functioning parts of society, from mail delivery to the few remaining banks and stores, disappear.

The plot has a compelling inevitability to it, as things go from bad to worse. This slow apocalypse is chillingly plausible, but some readers may find its complete lack of hope depressing.

“The Tooth Fairy” by David Stier is a grim tale set during the Korean War. The protagonist is an American soldier who pulls gold teeth from the dead bodies of enemy soldiers. As if this were not ghastly enough, he keeps written records of his treasures, adding bonus points to his score if he killed the victim himself. A mission to search a hill covered with corpses for the presence of any living opponents leads to an even more gruesome encounter.

Although there are no supernatural elements, the story definitely qualifies as horror fiction. The antihero’s coldblooded nature is powerfully conveyed. The author paints a compelling portrait of the banality of evil, but fails to provide a satisfying resolution.

In “Executive Decisions” by Rebecca M. Senese, a newly hired employee begins working at a very strange job. His task is to enter the minds of people and encourage their obsessions. In particular, he makes a boy yearn to be a champion skateboarder. Eager to climb the ladder of success, he tempts the boy into crime. His action leads to a confrontation with his boss, and we learn the motive behind this peculiar business organization.

The story can be read as an allegory for the way in which some corporations ruthlessly exploit consumers, but it lacks satiric bite. The revelation at the end is predictable.

Victoria Silverwolf is obsessed with writing these reviews.