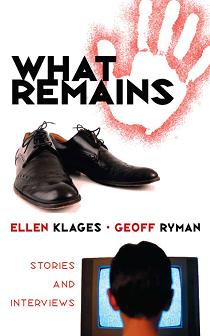 “Echoes of Aurora” by Ellen Klages

“No Bad Thing” by Geoff Ryman

Plus interviews with both Klages & Ryman (by Debbie Notkin & Eileen Gunn, respectively)

As I may have mentioned before, I’ve been pretty well out of the SF scene for over a decade, so the names of both writer Guests of Honor at WisCon were only vaguely familiar to me, although I’d not read anything by either writer before. After reading this chapbook, I intend to remedy that lack as soon as I can. All three stories appear to be original to the book, as all are copyright 2009.

“Care,” by Geoff Ryman, is a story based on Sheldon Brown’s Scalable City project. I’ve been to the site and read all the text (yes, all) and looked at all the pictures and videos, and I’m still somewhat baffled by it. Scalable City takes, for example, a satellite picture of a portion of San Diego, simplifies it, reproduces it via some fractal-y algorithm(s), and builds on it. It uses the original picture as a bump map for some 3-d landscape, populates it with roads (according to the algorithms), buildings and trees, and creates pictures, videos, and objects (via a 3-d printer, looks like). I have no clue what the purpose is, if there is any, but it’s all got a certain elegance to it.

Ryman has taken one image, that (I think) of a cube world (yes, the atmosphere is also in the shape of a cube, though how one would keep air along the edges and in corners is a mind-boggling thought for some world-builder) and posits what kinds of characters might live in such an environment, where the built world fills one face and then begins expanding into new faces. Tiagozinho lives on the Saõ Paulo face, but one day his daddy takes him over the Edge to where the AIs are building the Rio face. Complete with Sugar Loaf Mountain, Corcovado and the big statue of Jesus.

What happens to Tiago on the Rio face, and how he learns to be a big boy and “all grown up” is all tied up with the way Scalable City is built and populated by the AIs (read algorithms here). It’s quite cleverly written. (By the way, there are also dodecahedral worlds.)

“No Bad Thing,” also by Geoff Ryman, left me bemused for a while. In Analog, we’ve seen Sigmund Freud as a Catholic Inquisitor, which is one reason I love our genre—our authors can imagine anything imaginable and many not—and in this odd story, we see Albert Einstein as an immortal vampire (or Virally Affected Revenant)!

Einstein is applying for a job in a biological laboratory (“I have a degree in biology, now—night courses.”) studying radiation resistance in plants and transfer of biological DNA between plants. Why? Well, there’s this big radiating thingy up in the sky that affects vampires a lot.

In the story we learn a lot about vampires, and love, and why population control is a good idea when you have an undying population. And why vampires would be a great choice of crew for a “generation ship”—you don’t need cold sleep, and you can arrive with the same crew that left! A fun little romp. I’ll be watching for Mr. Ryman’s fiction from here on in.

“Echoes of Aurora,” by Ellen Klages, details one summer and fall in the life of Jo Norwood, single and newly retired, whose family had owned a penny arcade in the lakeside town of Cedar River. After her father and mother died, most of the machines in the arcade were sold to pay bills, estate taxes, etc., leaving only the fortune-telling machine, the nickelodeon and a half-dozen mutoscopes, those brass-cranked oddities that flip a couple of dozen photographs quickly enough at you that persistence of vision shows you a “moom pictcha.” (My personal favorite mutoscope was one on a pier in San Francisco, showing the Great Earthquake of ’06. But I digress.)

Jo has come back to Cedar River to close down and sell what remains of Norwood Amusements and find some closure in her life. She awakes one morning in her old bedroom, seeing the old oak tree outside fighting to put up a few green shoots against the April sky; then later, while sorting faded postcards and memorabilia in her father’s workshop at the back of the arcade, hears the old nickelodeon roar to life.

She comes out into the empty arcade to see a copper-headed woman in a green sweater dancing to the strains of “Stars And Stripes Forever”—the woman explains that she is Aurora, “Rory for short”—and invites Jo to see that the old oak outside is dying. She and Jo make a connection, and soon Rory is living with Jo in the old arcade.

Jo and Rory become lovers and through no volition of her own, Jo goes on a journey of inner exploration both of her outer past (her father’s memorabilia) and her own memories. It’s all quite lyrically told, and we and Jo find out together that there are external links to our internal selves, and sometimes we can outlive the trees around us. I really liked this story, and I think you will too.

The remaining items in the book are interviews with both Klages and Ryman, both quite well done and completely different in their tone and intent, as well as short biographies, and fairly complete bibliographies (novels and collections). I don’t know if this book is available for purchase (the copy I have is one of 150 numbered copies, so possibly not), but I do urge you to email Aqueduct Press to see if there are non-limited copies for sale.