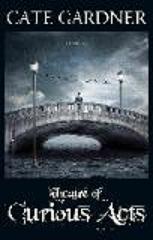 “Theatre of Curious Acts” is a post-modern fantasy set in England. It takes place mostly after the Great War, though the flow of time is difficult to follow. The main character’s rank is never given, but it is implied by his time in the trenches that Daniel Cole was a British Army Private.


The story is told in three parts, each broken up into various chapters. “Part One: Shrapnel from a Broken Smile” starts during Daniel’s time at war, and is the most surreal of the three sections. Daniel is interrupted by a man who wants to show him something through a spyglass, in order to prevent the end of the world. Daniel’s perception is taken out of the war, though his body isn’t, and he sees many strange and confusing things in a theater at the end of time. The contrast between his current reality and the reality he sees is harsh and almost painful–why should he care what skeletons are dancing at the end of time, when his friends have gone over the top and his trench is filling with gas?


“Part Two: Paper Dragons” has a more traditional narrative–though “more” is a relative term. It follows a sort of dream logic. “Paper Dragons” takes place after the war, and features those friends last seen in No Man’s Land. It also features people and things Daniel first saw through the spyglass, but Daniel himself cannot remember them, he is merely equipped with a faint sense of déjà vu.


“Part Three: Anticipating Pitchforks” splits its narrative time between Daniel and Swan, the most ruthless of the boys who made it back from the war. It brings all of the narrative threads together, clarifying and returning and tying up things into a nice little Ouroboros ending.


The narrator has a bright, romantic vocabulary, and I found it so jarring during “Part One” that it pulled me out of the story. However, as the plot progressed, the things being described and the voice used to describe them became more unified, which meant I was becoming more comfortable with the story as the characters became more confused. Another source of this kind of contrast was Gardner’s use of reference. Characters from different times make references to things the boys cannot comprehend but we do, again resulting in a divergence between our experience as readers and their experience as characters. Only when the end approaches in all its kaleidoscopic glory are these tensions resolved, uniting character and voice and reader experience into one.


The aesthetic of this 40,000 word novella evokes theater and circuses and other strange, false places that tell true stories. It’s a cross between Gaiman’s Neverwear, Maguire’s Wicked and Vonnegut’s Slaughterhouse-Five, and if you enjoy any of those, you will enjoy the “Theatre of Curious Acts.”