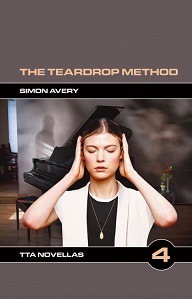 Krisztina Ligeti is a Hungarian singer/songwriter whose first album was released in 2008. In the six years between then and the start of this story, she’s fallen in love with a woman and stopped making music until that woman was killed in an accident the year before. With that event, she’s begun hearing music which she follows until she finds the person it belongs to, a person who will die soon. Only when they do can she hear the fully-formed song, which is a capsule gestalt of their lives, and record it. While tracking some of these songs, she encounters what might be called the Masked Man and the Song Stealer. Both are enigmas for much of the story but the former turns out to be tightly connected to the trio and the identity of the latter is eventually revealed, along with the fact that she can also draw art from death but kills in order to get it. She knows about Krisztina’s “gift” and, as the Masked Man warns, really wants to write a story about her. Krisztina’s pirouettes through the city with these two, while meeting the dying and making her music, form the bulk of the tale’s drama. Another key element, introduced abruptly after about a third of the story, is Krisztina’s relationship with her father. He’s also a musician, but his dry spell lasted forty years after the 60s. He’s recently released an album and is dying of cancer. Her long estrangement from him coupled with his current condition and her current abilities create a complex counterpoint to the main thread.

This is #4 in the “TTA Novellas” line and comes with “Going Back to the World,” a bonus reprint novelette starring the wife of the music journalist whose reviews of and interviews with Krisztina and her father are included as brief sections in the main novella. I was inspired to read this after being impressed by Avery’s story in Black Static #57, “Sunflower Junction,” which was also about, among other things, death, literature, and music (even being named after the musical work within it as this one is—this one perhaps being inspired by The Teardrop Explodes). This story is certainly not bad, but didn’t impress me as much. (Perhaps not even as much as the bonus novelette.)

The story opens quite slowly, with the only point of suspense being the nature of the Masked Man until the Song Stealer is introduced and kills the woman Krisztina was about to get a song from. However, the story is primarily interested in character and theme more than plot so this could be considered part of the design. The main theme is perilously near to “suffering for art” but, as explicated throughout the bulk of the tale, “The Teardrop Method” defines something similar to that without reducing to the rote phrase and, further, underscores that that is only one of the methods of creation. And, ultimately, the plot does kick in and becomes rather exciting, even if the ultimate action is predictable and the thematic conclusion doesn’t seem to derive directly from the action.

I wanted to make three stray, minor points. First, proofreaders need to be extra-careful in fantasies. The story speaks of an invasion of Czechoslovakia in 1958 (as well as of a “Hasburg” Empire) and I wasn’t sure at first if this was some sort of alternate history but it becomes clear that it’s a typo for 1968. (There’s also some sort of glitch in which Krisztina’s father says he began recording again because of his diagnosis but then says he got the diagnosis after starting to record.) Second, the author frequently elided things (describing a character paying a cabbie without having described them getting out of the cab) or had the characters not ask questions they should have (is the Masked Man duping me?) or did not anticipate questions the reader might have (is Krisztina an innocent or magically causing deaths or psychotically rationalizing murders). I’m not sure if it was intentional (a sort of literary “jump cut” technique) or not but it seems not, as these elisions didn’t contribute anything positive. Finally, an element that does contribute positively are the superb depictions of small, detailed, interpersonal interactions, most notably in Krisztina’s first meeting and subsequent early connections with her father.

In sum, this is a mostly dark and dreary tale (intentionally), set in an old and cold place, but has frissons of excitement and energy and, ultimately, a more varied palette than it seemed it would have at first. While I couldn’t get enthusiastic about it myself, there’s much in it to admire and it may appeal to some whose tastes run to such milieus and themes.