The Last Night of October 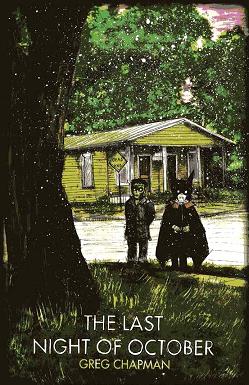 Gerald Forsyth is an old man with emphysema whose constant companion is his oxygen tank. There is no one else in his life aside from Doreen, the visiting nurse in charge of keeping his oxygen supply steady, his morphine pump refilled, and any other medical needs tended. It’s Halloween. Gerald watches the front door in almost hysterical anticipation of some horror that visits him every year. The first ugly surprise of the night is Kelli, the younger, chirpier R.N. filling in for Doreen, who called in sick. Gerald hates Kelli from the start, and quite soon I did too. Kelli has the bad taste to make Gerald think she has no idea how to refill his morphine syringe. That is cruel, unprofessional, and grounds for a reprimand if not a license suspension. Kelli tries to laugh off Gerald’s outrage by telling him to lighten up because Halloween is all about having fun. Gerald thinks quite the opposite, and for good reason. A lot of tedious and generic dialogue happens before the visitor Gerald dreads finally arrives. The dragging pace, cardboard characters, and deliberate withholding of the visitor’s identity made me quickly tire of reading this.

The visitor is an undead boy dressed up in a Frankenstein costume. Gerald is in a total frenzy of panic that brought me to the edge of my seat. Kelli refuses to take him seriously and opens the door to the monster child, hellbent on giving him some of the candy she’s carrying in her purse. (Another detail that made me wonder about Kelli. R.N.s don’t hand out candy to children they don’t know. Neither do they encourage children to accept candy from strangers. Could Kelli be the real monster here?) Then Kelli makes the classic mistake of inviting the monster child into Gerald’s house. Gerald completely freaks. The monster child starts bleeding and then vomits blood all over Kelli. Nothing gets an R.N.’s attention like blood. She finally gets the idea that this child is not a normal trick-or-treater.

The chapters of the novella alternate viewpoints between Gerald and Kelli. It takes a very long time to get to the point of the story, which is the reason for the monster child’s annual visits. The random factor this year is the presence of Kelli, for whom Gerald feels no real loyalty or compassion. What happens to Kelli would make sense if the narrative didn’t take a sudden left turn into what might be a dream sequence or an alternate universe or something worse. That’s not clear, and it spoils the dramatic escalation to the climax of the story. The one quality horror element in this novella is the true villain. The who, what, and where of that person makes for some vivid, creepy reading. Too bad it’s embedded so deep in the plotline that many readers may well give up before they reach that point. Picture a cameo by Vincent Price about two-thirds of the way through The Howling XXIII and you get the idea.